Kashmiri language has rewarded me in unimaginable ways: Dheeba Nazir 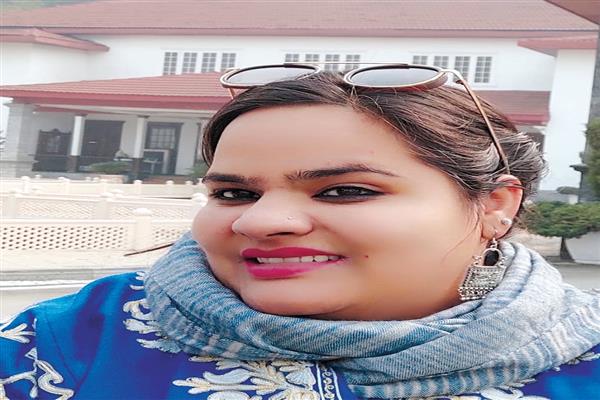 In this interview with Rising Kashmir’s sub-editor Irfan Mehraj, Dheebaspeaks about her growing up years, her major influences among Kashmiri language tradition and why the preservation of mother tongue should be a foremost priority.

Tell us about yourself and your background?

I belong to the Ahangar clan from the Safa Kadal area of Srinagar. I am very fortunate to have been born in a family where education was always a priority. I grew up in a family where literature was loved and appreciated and this influenced me while growing up. My father is an expert in Iqbaliyat and I too choose literature as a career with his support. I have heard Lal Ded’s (14th century Kashmiri poet) vaakhs in childhood before I read them during my post-graduation. My father opened up the world of Kashmiri literature to me during my growing up years. These factors have enabled me to pursue a career in Kashmiri language and literature.

How did you choose Kashmiri language and literature as a subject?

When did you start writing?

I have always been interested in writing since my school-going days. It was during my college days, however, that I began to take writing seriously. This was in 2005. This was the time when I got published. In 2005, my first short story titled Tsandev (The Search) was published. It is about the exile of Kashmiri Pandits. There is a story behind my first published short story. It goes like this. I was born in 1988 in Safa Kadal and grew up during the nineties. My maternal home was in Khanqah (Fateh Kadal). During those curfewed days of the nineties, my mother would take me to Khanqah. We would go on foot and walk through those old alleys and lanes of downtown Srinagar. These walks left a deep impression on my mind as this was the heart of downtown Srinagar and those houses, including the Pandit ones, and their imagery never left my mind.

I recreated this aura in my short story Tsandev, and described these abandoned houses of Kashmiri Pandits with broken windows and doors and dogs roaming in their courtyards. There is another interesting backstory as well. When I was born, a Kashmiri Pandit woman had also given birth to a boy in the bed next to my mother’s. The lady had fallen ill and during this time my mother breastfed the little boy. Till today, we haven’t been able to locate that Pandit family. We published notices in newspapers but we couldn’t find them. I recreated this in my short story Tsandev. There were other reasons why this was my first short story. Several Kashmiri Pandit luminaries like PK Jalali, who lived nearby our home and I had grown up hearing about them.

As I grew up in Safa Kadal, which was where famed Hindu saint Rupa Bhawani resided, I wrote about her during my first year of college. I titled the essay MyaniAlaaq-ich akh GumnaanShayara (An Unknown Poet of my Locale).

I wrote several other stories after Tsandev. My work got published in many magazines. I started attending the Dara Shikoh literary festival. It was organized by the daughter of Dr Karan Singh (son of the last Dogra ruler of Kashmir). With time, I attended several national and international workshops. Shujaat Bukhari (the late founder of the daily Rising Kashmir) appreciated my work. He would always encourage me and we held several workshops on the Kashmiri language.

I have also translated three works of the Kashmiri language into Urdu.

Can you tell us about your first book Zareen Zakhm? What is it about?

Zareen Zakhm is a collection of fifteen short stories that came out in 2017. About its theme, obviously as a woman, some stories are feministic in nature. There is a story about a woman named Mogul who is searching for her disappeared son. The story is based on a real woman. There is another story about a man who goes mad after his parents don’t allow him to study literature as they want him to be a doctor. Besides these, there are many other stories on different themes.

How was the response to the book?

The response was very good. The book won the Sahitya Academy YuvaPuraskar in 2018, which is given to budding writers of the country. In January 2021, the book was awarded the Lal Ded Khatoon-e-Kashmir award.

Fortunately, the response to my stories has always been positive. People loved the book. People would call me to read stories from the book. Interestingly, my uncle who is a businessman bought fifty copies of my book on the day of its release and he would hand over a copy of my book to his customers instead of a business card and they would call him praising the book. It went out of stock shortly after its publication. The book is not available in the market at present. People wrote good reviews of the book.

What were the challenges in getting your book published?

There sure were challenges along the way. People would comment about me being a woman, especially those who knew me. On the day when my book was released at a Srinagar hotel, the Kashmiri language teacher who had refused to teach me the Kashmiri language came to me and congratulated me. His presence influenced me somehow. He was the one who had told me what will Kashmiri give me? Fortunately, I make my living by teaching Kashmiri. I feel my mother tongue has rewarded me in ways that I had never imagined. I feel fortunate. My husband Sikander Khan has also been very supportive.

Any Kashmiri language authors who have influenced your writing?

First and foremost is Lal Ded, the oldest Kashmiri language poet. When you read Lal Ded, you develop a personality. Such poetry, like Iqbal’s, wakes you up. Besides Lal Ded, another poet who has influenced me is my teacher Prof. Naseem Shafaie. I credit Naseem Shafaie for guiding me and showing me a path to walk on. My father and Naseem Shafaie are two big influences on my career. And of course, the legendary Kashmiri poet Rehman Rahi has been a great influence. Rafiq Raaz and Shad Ramzan have also influenced me.

What are you currently writing about and your future plans?

I am presently writing my memoir. I am also writing a novel as there hasn’t been a significant tradition of novel writing in the Kashmiri language.

What message would you give to budding Kashmiri language writers?

My message to budding Kashmiri writers would be to hold the language close to their hearts. We should remember that this language will stay alive as long as we are alive. If we love our language, it will grow and so will we. We must make an effort to understand our language and its emotions. That should be the goal.