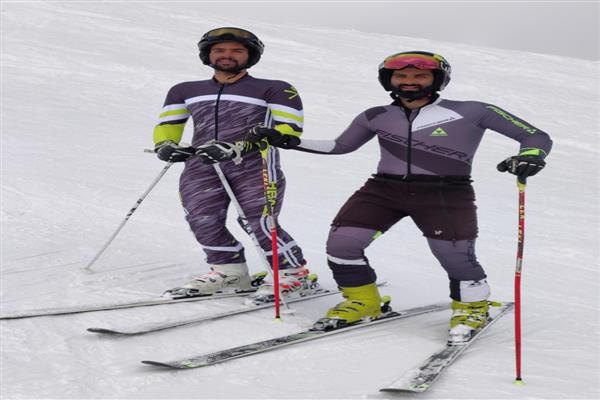 This development has come , soon after Arif Khan, the Kashmir based Indian olympian Skier finished  his tour from recently held Winter Olympics at beijing , China.

The duo are participating in this championship starting from February 23 to February 27 this year.

The duo are part of eight member Indian Ski team who will compete with players from asian countries which include Lebanon, China, South Korea, Japan, Kazakhstan, Iran and Hongkong.

Both the ski athletes have proven their mettle in various local and national events.

He has played Three nationals and has bagged two silvers- one in Slolam and another in giant  slolam. Earlier this year he qualified for junior nationals, played at Auli Uttrakhand from February 7 - 9.

"I hope this platform will provide opportunity me to showcase my talent  at this international Arena," he asserted.

"Ayan turned to skiing at age of four. I would accompany him and acquaint him with basic skills of skiing,"  said ayans father Tariq, adding since than he has not seen back.

Waseem Bhat hails from Malbongil village in Tangmarg area in district  Baramulla. He has bagged several medals for J&K while playing national events.

Waseem is also known as Ski Tiger in his area. He started his skiing journey at the age of nine, after influenced by his brother, Jahangir Bhat who happened to be a champion ski player at Gulmarg.

"But I trained waseem,  seeing my brother playing gives me feeling as if it is me who is playing till date," says Waseem's elder brother Jahangir.

Waseem has played seven nationals he got selected in Indian ski team and is also registered with Federation International Skiing(FIS).

Both these young skiers also are seeking guidance from olympian Arif Khan , who according them keep them encouraging and guiding whenever they needed that.