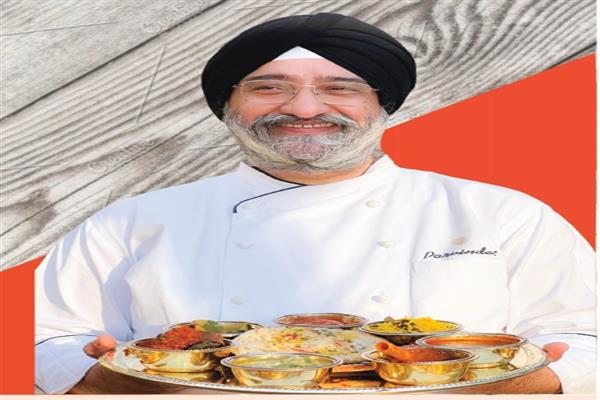 Dr. Parvinder Singh Bali is the corporate chef at Oberoi Centre of Learning and Development (OCLD), a hotel management institute which is part of Oberoi Group of hotels. He has trained chefs serving in 32 Oberoi hotels in India and overseas.

Belonging to an agriculture family of Chak Kanispora village in Baramulla, his father Major Ranjit Singh Bali (late) served in Army, and the family moved every three years to various parts of the country.

Dr. Bali was born in Jabalpur in Madhya Pradesh and pursued his educated in places like Delhi, Mathura, Tejpurand Srinagar. His education was a mix of convent schools and Kendriya Vidyalayas.

From a young age, he was passionate about becoming a neurosurgeon but life had other plans. He was selected for the National Council of Hotel Management at Kolkata. He accepted it believing that hotel management would give him time to prepare for appearing in medical entrance exams.

When Dr. Bali joined hotel management, his friends and family discouraged him. But he had support of his father, who had realized that this was a profession and an opportunity to grow and earn a fortune.

“The journey was not easy and very soon the industry took over my mind and heart, putting all thoughts of medical far away. Then there was no looking back. Everything around was new and exciting,” he says.

It was also challenging for him to work in kitchen under immense pressure, heat, screams and noise. .

Dr. Bali says that getting selected into the training program at Oberoi School of Management is a dream for every hotel management student. He was among only two students from his batch of IHM Kolkata who got selected for this prestigious program.

Dr Bali’s journey has taken him all over the world and his diligence and hard work have won him many awards and rewards.

He speaks nine languages, is a marathon cyclist who has cycled over 40,000 kms in the last 5 years. He is a melodious singer, plays various instruments and is a student of Pandit Rohit Anand, under whom he is studying classical flute in the Guru Shiya tradition of Maihar Gharana of Music.

Dr Bali says he is always thinking of new projects and is only a call away for people in the industry who need guidance and counselling for setting up new culinary projects.

His most prominent awards include the honorary doctorate conferred on him for his contribution to the culinary industry by the Asian Chamber of Hospitality.

He is also a topper of the American Culinary Institute and has won many awards for culinary expertise. The chef is also the Global Ambassador for Gastronomy (Greece) representing India on the International stage.

An educator and trainer, Dr Bali has authored 5 books which are part of syllabus in Indian Hotel Management Institutes. These books are also used in hotel management schools internationally. He is also the author of bakery and pastry trade textbooks for class 10th to 12th for NCERT India.

About his books he says, “My books are different from other books on cooking. These provide practical knowledge such as cuts of meat, not just with the nomenclature of the French and the Americans, which is International standard, but also in Hindi for local students.”

Apart from that, there are close to 55 educational videos with his books which guide the students step by step. The text books are in various editions and are used throughout the three years of a Hotel Management course. These textbooks meet the requirement of the IHM syllabus on a theoretical as well as practical basis.

The cookbooks which he would call as his own bibles are the very old classic books such as the Classical French book called Ma Cuisine, which is all about the basics of French cooking techniques, Larouse Gastronomy which is a classic French culinary dictionary, the 36-volume of Art culinaire and many signed books of famous chefs from around the world.

Dr. Bali enjoys his interaction with the young industry aspirants on social networking sites as he has over 5K followers on Facebook and over 14K on Instagram. He mentors and advises many young chefs on social media platforms where he is popular by the name ‘Chefbali’.

He is excited by the current uptake in the number of youngsters who want to become chefs, but his concern is that a lot of them don’t realize the reality of the industry.

“They simply see the glamour of the celebrity chefs and are blinded by the sparkle of fame and fortune, not seeing the pitfalls, the hard work and the amount of dedication that this career demands,” he says.

In his message to the younger generation of aspiring chefs, Dr. Bali says the youth should not take shortcuts in their journey and make sure that their foundations are strong.

“Your knowledge has a lot of practical aspect to it. Take time to learn basics well. Remember not just the 4 but the 6 P’s of this industry that is Product, Process, Planning, Profit, People and Passion,” he says.

Dr Bali is a firm believer that the cuisine of Kashmir, which he has showcased and promoted in various food promotions in India as well as overseas, is underplayed till now.

In his promotions, he educates people about how much more there is to Kashmiri cuisine other than just the wazwan.He is bringing awareness of lesser-known aspects of the Kashmiri Pandit cuisine and the Kashmiri Sikh cuisine by highlighting these dishes in his promotions and events.

He is keen to bring about a revolution in the hospitality training scene in Kashmir. Dr Bali aims to collaborate with entrepreneurs, who wish to set up training centres in the valley or hold training workshops for young Kashmiris who want to enter the tourism industry.

“There was a time when Kashmir was at par with international destinations. With swarms of tourists skiing on the glistening slopes of Gulmarg, golfing at the highest altitude golf course and enjoying water sports and wonderful delicacies on the boulevard of Dal Lake. Dreaming of a time, when such tourism opportunities will return to Kashmir. I am keen to be a part of the glorious revival of my homeland,” he said.