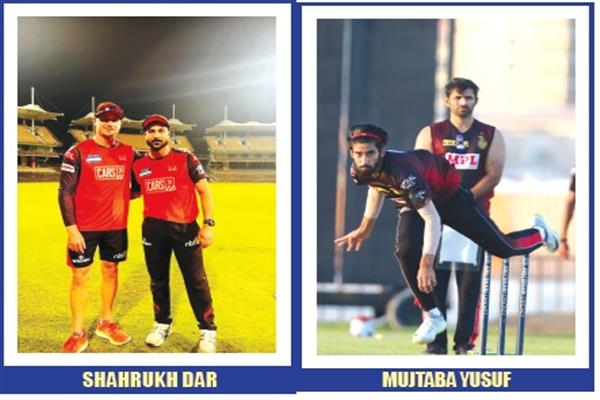 Mujtaba Yusufhas been playing professional cricket representing J&K in different national tournaments all over the country. He is a rising sports star who is considered a bowling maverick for J&K.

20 year old left-arm pacer is currently playing for the Senior Ranji team representing Jammu and Kashmir. He has a considerable achievements up his sleeves which include net bowler for two prominent teams in IPL teams including Royal Challengers Bangalore and Kolkata Knight Riders. He was also on the bidding list for the IPL auction 2021 with a base price of 20 lac rupees, but remained unsold.

Mujtaba was born in a lower-middle-class family in south Kashmir’s chinar town, Bijbehara. At first, he casually played cricket in local tournaments.Impressed with his bowling skills, his friends and family members insisted him to polish his skills and suggested him to get familiarized with professional cricket.

At the school level, he played several national matches under J&K Youth Services and Sports. He went to get himself in several trials organized by the Jammu & Kashmir Cricketing Association (JKCA). He was inducted into the team after seeing his bowling skills and his hard work. He constantly worked on polishing his bowling skills and worked hard to prove himself useful to the team.

His consistency paid off and he went to play for J&K for the first time in 2012-13, when he was a student of 7th class, for the national U14 cricket tournament which was held in Himachal Pradesh where he performed well and took a couple of wickets.

After this confidence boost, there was no stopping for Mujtaba as he went on to play and represent J&K in under 16 twice, in under 19 thrice and senior tournaments, starting from the year 2016 till now. He also played in U19 Challenger Trophy India C which was held in Hyderabad in 2018-19.He was directly selected into the senior J&K team for T20 Syed Mushtaq Ali Trophy and in 2019-20 Vijay Hazare Trophy.

In 2019, while he was playing for his state team, by seeing his performance in various national tournaments, he was called by Kolkata Knight riders Selectors as a net bowler. In 2020-21 he was called by Royal Challengers Bangalore selectors as a net bowler and continues to be the same for the team. This year, in 2022, he was also inducted into the IPL auction with a base price of 20 lac rupees, but unfortunately, he remained unsold.

While talked about how his life changed after getting into full-time cricket, Mujtaba said, “My life has completely changed and it drastically improved the public perception of mine. The way people treated me seven and eight years ago has completely changed. Before all this, I was a nobody and now everyone recognizes me, from my elders to youngsters, everyone treat me with utmost respect.”

He has, so far, not played a full-fledged IPL match but is optimistic about getting the space in a team next year.

About his cricket inspiration, he said he has always liked Irfan Pathan, R.P Singh and Zaheer Khan who all like him were left-arm pacers. And currently, he follows Jaspreet Bumrah.

When asked about the current position and perception of J&K cricket on the national cricketing horizon, he said, “For the past several years, the way I have heard and observed about J&K cricket, J&K state cricket team was not seen as a worthy team on the national cricketing horizon. We were not able to win as much as we needed. It was said that the team only came for the sake of participation. But now, in the past three-four years, the whole game has changed, now the whole team ethos is changed and the team have learnt how to win and work tirelessly towards achieving it. In these years we have only lost a couple of matches and have emerged as a competitive team among other states.”

Shahrukh Dar, a Srinagar boy with a humble background became a rising star in the field of cricket who has represented Jammu & Kashmir in various tournaments all over the country.

26 year old, right-arm medium pacer has a unique acumen to handle the dynamics of the game. He previously was selected as a net bowler for Royal Challengers Bengaluru (RCB) and currently is a net bowler for Sunrisers Hyderabad (SRH).

Shahrukh, at first took a casual approach to the game and only participated in local club tournaments held across the city. In 2015 he was awarded as the emerging bowler of the tournament in the annual edition of the Downtown Champions league.This gave him confidence and he started to think about taking cricket seriously and pursue it professionally. Later, he started participating in cricketing trials and took a professional approach to the sport.

In 2016, he got selected for under 19 Jammu & Kashmir state cricket team and played some matches where he performed well. In 2017 he got into Zonal Camp and in 2018, he played for the state in Syed Mushtaq Ali Trophy and in the same year was selected as a net bowler for RCB and then in 2022 was again selected for SRH.

“I attribute all my wins and whatever I have achieved till now to my family who has always supported me in every cricketing endeavour I took. My thank my cousin who always encouraged me to play cricket and polish my bowling skills,” Shahrukh told Rising Kashmir.

He further said, “My dream is to make a name in the world of cricket. I want to become an inspiration for others who want to pursue this sport.”

Talking about his IPL experience he said, “The whole IPL experience was great. The things you learn during the practise sessions with the senior players is a different experience. The way they all treat you there in the practice camps is amazing. As a net bowler, we are given equal respect as any other main player.”

When asked about his bowling inspiration he said that he follows Bhuvneshwar Kumar and with whom he met during his net bowling for SRH and learnt many things from him.

Talking about the future of cricket in Kashmir he said, “Our state has immense talent in every sphere, especially in sports. The talent only needs to be channelled in a good way. Here, in the valley, we have many talented cricketers, if given the opportunity they can do wonders. By only giving slight attention to the lack of infrastructure problem we can overcome this problem and we can also produce world-class cricket here in Kashmir.”

He said, "Productive initiatives like this year’s Talent Hunt organised by Jammu & Kashmir Cricket Association (JKCA), if organised every year, will promote and give major push to the sport."