Kashmir youth in tone with beatboxing 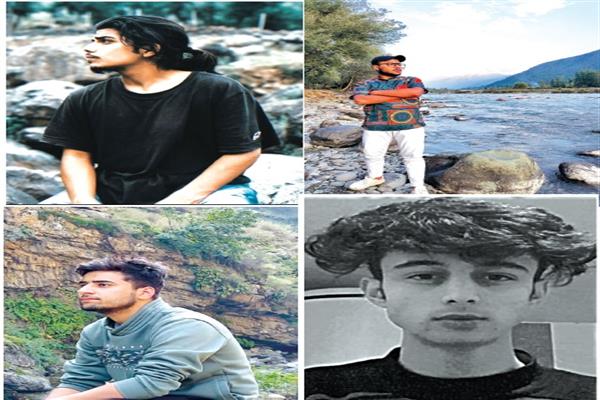 Beatboxing is gaining popularity among youth in Kashmir . The novelty of the music genre hasn’t kept the youth away from exploring the beats and tempos. Learning from the internet and each other, the artists are shaking up the stage with their vocal skills.

With no musical instrument in place, the artists of the beatbox use vocal tract to create sounds and sound effects.  For making harmonies and rhythms, it involves usage of one’s mouth, lip, tongue and voice.

Sufiyan Rouf, a name synonymous to beat boxing in Kashmir, is the first beatboxer from Kashmir. In 2016, he started beatboxing after learning from videos on YouTube.

Sufiyan is the first artist who has artfully mashed up the age-old folk musical instruments of Kashmir with his contemporary beatboxing. Tumbhaknari (a small drum encased in a funnel shaped body played by hitting the drums with hands) and Nout (a large clay pot played with the palms of the hands) are some of them.

He said, “I have worked with a lot of artists from Kashmir who play musical instruments. I have done beatboxing with Rabab and flute. You can do a lot of things in beatboxing as it provides you much space to explore things.”

In 2019, after moving to Delhi, Sufiyan AKA Abaddox got exposed to many beatboxing groups and started jamming with them which also led to the honing of his skills. Simultaneously, a thought of making up a community for beatboxers in Kashmir pops into his mind.  He started Kashmir Beatbox Community which is registered with India’s largest community BBX India to look for the beatboxers in Kashmir.

The community that initially had five members, now has 38 artists from 12-21 years of age. The artists belong to all the corners of Kashmir and Ladakh as well.

Apart from teaching beatboxing online, Sufiyan is currently focused on his beatbox community. He said that a lot of people are showing up and want to learn. Sufiyan aspires to take the new genre of music to the international platform.

Having performed outside Kashmir in various battles and tournaments, Sufiyan believes the artists don’t get much platform to show their talent in Kashmir. “We are trying to spread our art and make more videos, organizing cyphers and tournaments by which we can reach people and tell them about this skill. We haven’t done tournaments so far. This year we will do tournaments so more people will indulge and get connected,” he said.

Mumin Khan aka Czawul, studying in 12 grade, has been in beatboxing since he was in 7th standard. While watching Swiss Beatbox, the world’s largest beatbox platform, he stumbled upon a video that inspired him into the art.

Mumin considers this an emerging form of art. “It is not very much known to the people and we are trying to create some space where we can do things like circle jams, cyphers so that people can know about this. Because of the internet now people are getting to know about it more and more. It will attract a lot of young people in future and I am certain about it.”

Another artist, Hayat Shafi, 20, came to know about the art through a friend and started searching about beatboxing on the internet and found the whole community on it.

He said, “The ability to produce different sounds and to make music out of it is itself a fascinating thing. We do beatboxing all the time. We start practicing right from the morning when we wake up from sleep.”

He said the genre offers infinite possibilities. “If a beatboxer loses a tooth, he makes a new sound.”

As more people are joining the community, Hayat said the amateur ones are welcomed and encouraged. “Many newcomers have improved a lot. We accept everyone and people get better when you give them the right environment to grow, only then they go far away in life. Like in school, a weak student is taught and is worked upon, we don’t get him out of the school so the same thing happens here too.”

With the internet, Kashmiri youth are getting influenced by the latest genres of music and the musicians around the world. Apart from mainstream music, many unorthodox artists are learning new forms of music on their own and making the right rhythms to connect with the youth.

D-Low, Napom, King Interia, Colaps are some of the internationally acclaimed beatbox artists. The youth admire them for their different styles and learn the flows and techniques.

Anzar AKA 5th element, another artist in the community, has been teaching beatboxing to his younger brother with an intention to make him a part of their growing community. Talking about the techniques of beatboxing he said, “One has to be stable on the tempo and flow. There should be a nice structure of the beat. In beatboxing, there are a number of ways to whistle. The new school beatbox has vibrations and when you do it on mic, the whole place feels like shaking.”

Beatbox is the fifth element of the hip hop genre, although it is not limited to hip-hop music only. One can hum, sing and do whatever beatbox offers him to do. The artists said currently drill beats are in trend and all of them practice to create the perfect one.

Having a connection with hip-hop, Mumin said that the hip hop artists of Kashmir inspire him and the other artists of beatbox. “Kashur Nizam comprising Ahmer, SOS including Tufail Nazir and Syed Arsalan aka Aatankki, Mir Gazanfar aka SXR, Qafila and MCKash have created the hip hop scene here in Kashmir,” he said.

16 years old, Hyder AKA Disperse started when he was 12 years old.  Doing beatbox battles in the community is his favorite thing to do and a learning opportunity for everyone. He said that each artist of the community is good at something and while jamming everyone shows their strength.

“Battles are very important. When we compete with each other we become aggressive and want to become more powerful. Since there is no school who teaches us, we teach each other. We are rivals as well as friends. We have a friendly environment in the community. We practice and jam a lot,” he said.

The artists said due to the Covid outbreak, many cyphers and live sessions couldn’t take place. The artists show their talent by uploading their videos on social media which over the time has gained them a good legion of followers.

Hyder said, “The response of people has been mixed but mostly it is positive. For conservative, it is derogatory because they fail to enjoy it but those who know it, really take it as art and appreciate the details and the intricacies that we as artists put into it.”

The artists feel that there aren’t enough places and opportunities for them to show their talent. The artists have been struggling for their identification and getting support from society and family.

“Live sessions are held in cafes usually. Performing live has a different aura. It makes you more confident but ongoing situations have caged the artists,” Mumin said.

Anzar said, “The artists don’t get support and acceptance from society. When I did beatboxing for the first time in front of my parents, they thought I was possessed or something. Initially they were not supportive but now they are okay with it.”

Mumin struggles when he has to hide his art. He said, “The struggle is one has to hide the talent from others so that they don’t judge you. It hurts me. I practice alone in my room and immediately stop when someone steps inside. I want to do it openly and want people to accept me with it.”

Talking about the future, Hayat said, “There is no future but we are creating the future. We are motivating youth and we will go far. As John Heywood said, Rome wasn’t built in a day.”