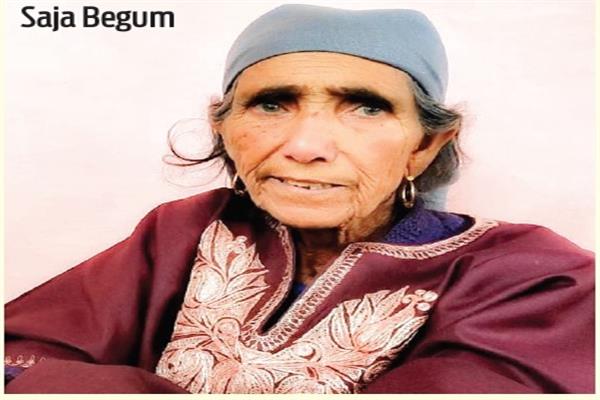 Kashmir is lucky to have some women who had been working at peripheries to heal eyes of locals by removing dust particles with local, traditional methods.

Among them is 65-year-old Saja Begum, a resident of Beerwah area of central Kashmir’s Budgam district. She is an eye healer and has been treating people over the past 45 years.

She said that she uses cotton to remove dust and small particles which go into eye while working or doing domestic chores.

Saja is doing this work free of cost for public service and people from across the Valley visit her residence and get their eyes treated.

“This is my contribution towards my society, she said.

“Nobody has taught me this but it is gift of Almighty Allah. Daily 30-35 people visit our house and get treated with satisfaction,” she said. Not only locals, even non-local labourers also visit her residence.

Mohammad Ayoub, who is elder son of Saja, said that she has become a household name in Budgam district and mostly people come to her during the harvesting season.

Ayoub, who earlier owned a shop at Beerwah, lost livelihood due to eyesight and now he is idle at home.

“I visit many doctors across India but could gain my eyesight back. It is up to Almighty, who is the best curer,” he said.

Ayoub said there is no one who can replace her mother.

“It can be problematic, it needs patience and full faith, which I think there is no one among the family who can carry it forward,” he said.

Haleema Bano, who often visits Saja’s home, said they are farmers and mostly during the household chorus, dust particles go into eyes during work.

“Initially I visited many doctors, but they couldn’t treat it quickly. Then I came to know about Saja and she removed the dust particle within 2 minutes,” she said.

Like Saja, there are many women who use hand, tongue or cotton to remove dust particles in eyes. They are women healers in local populace who treat people free of cost.

Mehnoor Arif (which is not her real name), from Wanigam area of Pattan has been removing the dust particles, charcoal dust, grass dust from the eyes.

Not only from Kashmir, people from other states often visited her residence and get their eyes cured with the local and traditional methods.

“I use my right hand to remove dust particles from eyes. People come back with smile. It gives me satisfaction. I am happy that I am helping people,” said Mehnoor.

The 25-year-old Mehnoor, who has studied up to 12th class, said people usually pay her as a token of love.

“I don’t charge them. Whatever I get from people, I contribute that amount to underprivileged or downtrodden sections of the society,” she said.

Last year she was surprised when some army men from a local camp came to her residence and they too had dust particles in their eyes.

“When they came to our village, we were terrified. But they had also come for the same purpose. One of them, who had wooden particles inside eye was struggling to see anything. I removed that within five minutes, it was great to see him happy,” she said.

Mehnoor wants to serve people till her last breath.

“Around 15-20 people visit our residence daily. It has become a routine for me to serve the people after I am done completing my daily chorus,” she said.

Similarly, Shamima Begum hailing from Wanigam Payeen village of Baramulla district, also has been removing the dust particles from eyes.

“My mother-in-law, Mugli Begum, who is now old, has taught me this. I use my tongue to remove the dust particles from eyes. It has been 20 years now, no one has ever complained of any complications,” Shamima said.

She said every morning people throng her residence and get their eyes treated.

“We aren’t against doctors or scientific procedure. If somebody has any serious complications or injury, we avoid them and advise them to consult doctor,” she said.

“When people get cured, they come again and it continues. I don’t charge anything. I do just to serve the humanity,” Shamima said.

About family support, she said her husband along with whole family has encouraged her for social service.

“If someone is an officer, he/she serves society in one way and we are serving people in a different way and will continue it till my last breath,” she said.

People hailing from different areas are hailing these women for their noble cause and are locally honored and respected a lot for the social service in the villages.

Rayees Ahmad, a 27-year-old young entrepreneur from Bandipora said last year they were working at home during which some dust particles went into his eyes.

“I was unable to see and visited every place in Srinagar. After 20 days, I came to know about a woman in Baramulla, who was removing such particles. Later I visited her home and she removed the wooden dust within no time,” he said.

Rayees said he remembers the pain he went through that day.

“When there is some dust particle inside eyes, it is painful and it needs people like them. They are the angles of the God, who have come to serve people,” he said.