Tourism, Industrial Business can get a major boost 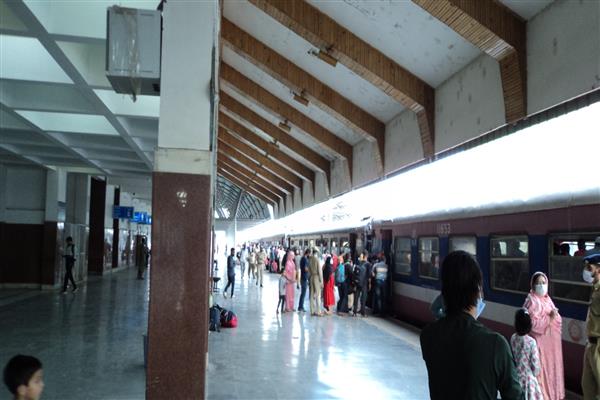 The year of 2023 will be a precious and memorable one for the entire union territory of Jammu and Kashmir as the Kashmir valley will get connected with rest of India through train as all the bottle neck projects in the railway tracks are expected to be completed in 2022 and will be thrown open for public.

India will also achieve a milestone by constructing the highest railway bridge in the world. The overarch deck will be completed with golden joints later this month. This bridge is located on the upper side of Salal Bandh near Kavari village in the Reasi district of Jammu and Kashmir.

This all-weather and cost-effective connectivity shall prove to be a boon for the economy of Jammu and Kashmir besides catalysing industrialization, movement of raw materials, trade, tourism and employment generation as well, stated a monthly newsletter covering government policies and initiatives.

Sustainable connectivity to this region is very important for national security, prosperity and socio-economic development of the region. Despite vast resources, Kashmir valley lagged behind in terms of development due to a lack of railway connectivity. Time to time, the central and UT governments made serious efforts to establish rail connectivity to the region for which a number of railway projects have been initiated which are under execution in different stages.

The Central government has declared the project a National Project in view of its significance for the nation. Institutions like IIT Delhi, IIT Roorkee, Geographical Survey of India and DRDO are providing expertise in the project planning and its implementation. This route will also see the construction of the world’s highest railway bridge and India’s first cable-stayed Railway Bridge.

After completion, this line will be an all-weather convenient and cost-effective mass transportation system and will act as a catalyst for the overall development of the northern most alpine region of the country. It is one of the most remarkable projects by the Indian government and once completed will be revolutionary for the Union Territory of Jammu and Kashmir.

This project has great significance for security and socio-economic development. It can play important role in rapid industrialization, movement of raw materials and finished products from J-K and encourage trade and tourism in the region apart from providing an opportunity for employment, an official said. Similarly, it will be a boon for the development of agriculture, horticulture and floriculture in this area, mentioned the newsletter.

The construction of the first three phases of the railway project has been completed and the line is operational between Banihal – Baramulla in Kashmir Valley and Jammu-Udhampur-Katra in Jammu region. Besides, work on the intervening 111 km of the Katra-Banihal section is going on which is the most challenging portion for construction due to its geology and extensive Riverine system with deep gorges.

According to reports, the logistics of the track faced many natural challenges as it had to be constructed through a major earthquake zone, battling extreme temperatures and hilly terrains. Though the sections from Jammu to Katra and Banihal to Baramulla have been built and are operational, the track from Katra to Banihal is yet to be completed.

The central government along with the Indian Railways will soon be opening the Delhi to Kashmir rail route for the public as the project is in its final stage, not only this, but the railway bridge on the Chenab river in district Reasi on the Baramulla railway line is also near to its completion.

Named 'Chenab Bridge', this railway bridge will be 359 meters higher than the water level of the Chenab river and its length will be 1315 meters. The highest railway bridge at the time was located on the Beipanjiang River in Guizhou Province, China, with a height of 275 meters above the water level. It is a major achievement towards the completion of the 111 km long Katra-Banihal railway section, for which massive Himalayan Hills are being mined.

The bridge is the tallest railway bridge in the world and is being constructed by the Northern Railway at an estimated cost of Rs 28,000 crore as part of the Udhampur Srinagar Baramulla Rail Link Project. This railway bridge will be 35 meters higher than the Eiffel Tower in Paris, France.

The railway track from Katra to Banihal is 111 km, most of which has been completed and the rest is in full swing, a 12.6 km long T-49B tunnel has also been constructed on it. Katra A total of 37 bridges are to be constructed in the Banhal track, including 26 major bridges and 11 minor bridges, there are also 35 tunnels in Srinagar. The Jammu railway line, which is expected to be completed by 2023, has a 93-km stretch of tunnels across the Himalayas. Out of 110 km from Udhampur to Banihal, 93 km of the track consists of tunnels and a lighting system will also be installed in these tunnels to control the trains. The stations to be built near these series of tunnels include Reasi, Salal A, Salal B, Daga, Bhasin Didhar, Singaldan, and Sambar.

The 111 km railways line from Katra to Banihal is in progress on the difficult kilometre stretch, which spans the Himalayan mountain range. 97 km of this section will consist of tunnels. The rail line has been laid on three sections of 25 km from Udhampur to Katra, 18 km from Banhal to Qazigund and 118 km from Qazigund to Baramulla and trains also run on them. The installation of the arch before the construction of the deck was one of the biggest civil engineering challenges in the recent history of India, with a 5.6-meter span at the top of the bridge being connected at the centre on both sides.

The length of the bridge is 1315 meters. The number of pillars is 17. 28,660 metric tons of steel were used in its construction, at an estimated cost of Rs 1,486 crore. The steel used in the structure is suitable for temperatures ranging from minus 10 degrees Celsius to minus 40 degrees Celsius. The bridge will have a minimum lifespan of 120 years and will be built for trains at a speed of 100 km.

This bridge has the ability to withstand winds of 266 kilometres per hour and withstand blast load and withstand severe earthquakes. It should be noted that a train ran for the first time in Kashmir in 2008 after one and a half hundred years of the introduction of the railway system in the subcontinent.

(The author is a regular columnist at Rising Kashmir and can be mailed at m.hanief@gmail.com)