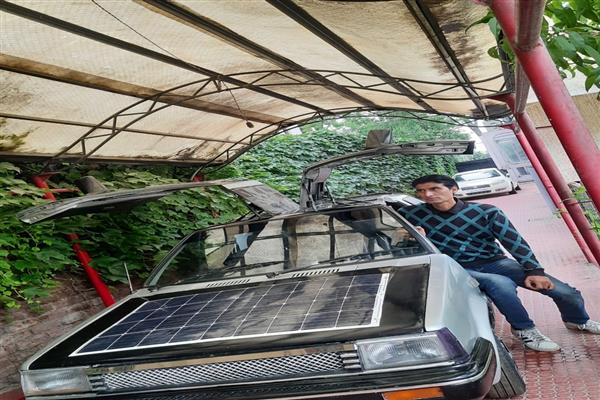 Breaking the notion that only the elite can have luxurious rides, Bilal Ahmad, a mathematics teacher as well as an innovator from Srinagar has made a solar car which is not only luxurious but is also affordable for the common people.

Hailing from Sanat Nagar area of Srinagar, Bilal has been working on this project for over 11 years and today he drives his solar car with confidence. The innovative car made by him works on solar energy and has solar panels all over the surface.

He watched and studied about various luxurious cars which were made since 1950. He also studied about an engineer and innovator named Delorian who started a company DMC which helped him and motivated him to make a car which is luxurious and simultaneously affordable for the common people.

"Cars like Mercedes, Ferrari, BMW are just a dream for a common person. Only few people are able to afford it while it remains a dream for others to drive such cars and roam in it. I thought of something to give a luxurious feel to the people as well," he said.

He started working on the car and modified it by watching the various videos and started adding the features in it.

Initially he wanted to make a car for disabled people but due to his financial conditions, he couldn't conceive the idea which made him put his idea on hold.  "Government didn't help me at that time. I was not financially sound so I couldn't take the cost of the innovation," he said.

Keeping in view the rising price of the fuel, he thought of using solar energy to run the car. In 2019, he went to Chennai to get in touch with the solar panel making company. Furthermore he researched and brainstormed with a number of experts of the field.

"In Kashmir, most of the time, the weather is gloomy. I used solar panels which can give higher efficiency even in low sunlight days. I went to many solar companies to check the efficiency of solar panels," he said.

The challenge of how the solar panels can be used over the car and how much efficiency it can give on the less surface area was overcome  by him with the use of monocrystalline solar panels.

Further he worked on the weaknesses of the solar innovative car. At times, the doors of the car when parked at the place received light sunlight, to overcome this problem, he made a Gullwing door which opens upwards like the ones in a Ferrari. Making and balancing the gullwing doors was a challenge as well as a difficult task for him. “With gullwing doors, the solar panels attached to the doors will also raise up and the sunlight will directly fall on them," he said.

Further, the solar panels automatically can change their direction with the changing directions of the sun. For this he has made a remote control which works within the range of 1.5 kilometers which can control the direction of panels so that more light can be absorbed by them.

Also he has increased the seating capacity of the car. "The sports car only has seating capacity of two people but here 4 people can sit conveniently. Also the braking system will regenerate the power to its batteries to save energy. It is eco-friendly and works on free energy resources. It has a huge potential to revolutionize the market," he said.

"The car is not a prototype, it is a fully luxurious car. The other luxurious cars available in the market have huge costs in crores. I want affordable inventions to reach common people. I want people to make use of advanced technology at affordable prices," he further said.

He has driven the car on the roads and has received good response from the passers-by.

He said he has used a Lead Acid battery in the car. “We can also use a lithium battery in it but we have to use a protection circuit with it additional protection can be added," he said.

Talking about his difficulties, he said that the unavailability of the equipment and gadgets is a major difficulty which innovators face here. "Lack of exposure among the local mechanics is another problem. The knowledge they possess is limited which makes it really difficult to explain them," he said.

He further said that the youth of Kashmir have more talent but lack exposure and platform to showcase it.

He wishes to soon start his company for its mass production which can also generate employment for the youth of Kashmir. "I will name the company as YMC after the names of my children- Yosha and Maisha. The company will be making luxurious cars for the common people," he added.

Despite having a B.Tech degree in civil engineering, he has a good interest in electronics. He has an experience of 14 years in teaching as he has worked in various colleges and schools as assistant professor. In the past, in 2009, he has made a LPG gas controlling safety device. The device which can automatically turn off the LPG cylinder from anywhere via a mobile app.