In order to arrive at the truth and provide justice to the victim community, the government should establish a court of enquiry and/or a tribunal as soon as possible 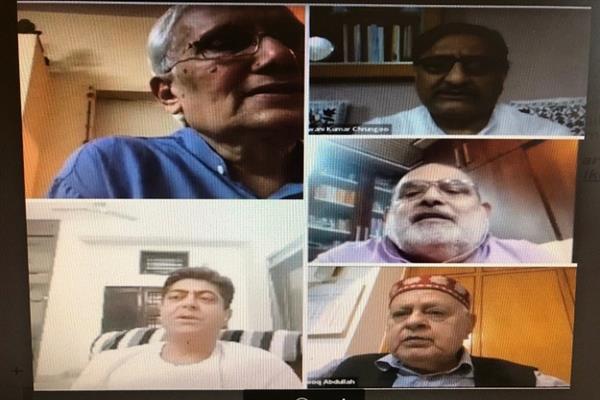 The Centre for Peace and Progress, in view of the current socio-political scenario, organised a very useful webinar on Truth and Reconciliation in context of debate on Kashmir on the last weekend. The webinar was attended by a number of prominent politicians, civil society activists, intellectuals and former bureaucrats of Jammu and Kashmir.

While initiating the debate, Nizammudin Bhat emphasized upon the need to bring out the truth of the last three to four decades regarding the Kashmir scenario. There has been a gross failure of institutions but it needs to be looked into as to which were the forces that could be held responsible for the same.

Dr. Farooq Abdullah laid stress upon the need for establishment of Truth & Reconciliation Commission duly established by the government to go into the whole gamut of circumstances that brought the Kashmiri society to such a pass. He said that though he tried to do a number of things to reverse the situation but was not allowed to go beyond a permitted line. There was no doubt that the Kashmiri Pandits were the primary victims of terrorism and mayhem, but there were others also who suffered the worst.

Adv. Ashok Bhan referred to the film The Kashmir Files and acknowledged that it depicted the story of the Kashmiri Pandits in a befitting way. However, there was need to move forward to look for solutions within the constitutional and political parameters so that the issues of the displaced community are addressed. He laid emphasis on resettlement of the community back in Kashmir for which the government has to go through a seriously structured dialogue process with the representatives of the community.

This author said that the blame for the past failures and particularly of the period from 1985 to 1990 can't be put on a singular leader or a political party. It was a serious breakdown of the entire state which failed to protect the miniscule minority Kashmiri Pandit community in Kashmir. All governments of that period are responsible for what happened to the Kashmiri Pandits. The situation needs to be understood in a broad perspective of the recent historical facts. There was always a historical intent of ethnic cleansing against the Kashmiri Hindu community in the Kashmir valley. In order to prove the statement, we can quote and forwarded a number of documentary evidences in this regard. The Kashmir Files is just a tip of the iceberg.

It was in 1931 that the Hindu community of Kashmir was subjected to a severe genocidal action in the valley of Kashmir at the hands of the extreme political forces. In February 1986, as many as 46 temples of Hindus were burnt in the valley by the mobs followed by the destruction of Hindu properties in entire Kashmir valley. The historical intent of ethnic cleansing of Hindus was accomplished by using the instrument of terrorism against the Hindu community in Kashmir valley. Selective killings of Kashmiri Pandits accompanied by communal sloganeering targeting Hindus in general and their women-folk in particular were raised by the mobs to threaten the miniscule minority community living in the valley.

There was a colossal failure of the government in regard to the protection of the community right from 1987 when the alliance government of NC and Congress took over in the state. The selective killings, brutal torture, abduction, rapes and kidnappings were used as methods to force the community to leave their homeland. The road of mass exodus of the Pandits was organised and shown to the Hindus by their neighbours, friends and colleagues among the majority community.

Even after their massacre, mass exodus and destruction of their cultural base, their hundreds of temples, schools, business houses, shops and thousands of houses were burnt, destroyed or vandalised in and after 1990 that continues till date. The governments extended their genocide by calling it "migration" and the victims of genocide as "migrants". Conditions were created by the governments and the circumstances that they continued to face other aspects of genocide that affected the number of the members/would-be members of the community.

Though the National Human Rights Commission declared in June 1999, in its decision in the case of genocide of Kashmiri Pandits, that 'acts akin to genocide have been committed against the Kashmiri Pandits and a genocide type design may exist against the Hindus of Kashmir', yet the successive governments failed to take the observation to its logical conclusion. The Commission also categorised the tragedy as ethnic cleansing.

There is an important need to look into both the aspects of the issue. The first is the issue pertaining to the Kashmiri Pandits since they have been rendered as refugees in their own country for the last 32 years. The second is about the impact on the other sections of the community who also suffered due to terrorism. The J&K High Court has since observed that the issue of Kashmiri Pandit exodus can't be compared with any other migration. The government should take an immediate cognizance of the debate and discussion going on in the country and abroad about the Kashmiri Pandit issue, institute a special crimes tribunal to go into the excesses committed against the community during the past four decades.

In the meantime, consequent upon the screening of the film, The Kashmir Files, there has been a global awakening and interest about the exile of Kashmiri Pandits from their homeland. The US based International Commission on Human Rights & Religious Freedom (ICHRRF) held its first hearing on the issue of Genocide of Kashmiri Hindu Pandits on the last Sunday evening. The Commission is headed by Prof. Ved Nanda, an authority on international law and human rights. Ved P. Nanda is a distinguished university professor and Thompson. G. Marsh Professor of Law at the University of Denver, US where he founded the International Legal Studies Program in 1972 and now directs the Ved Nanda Center for International law and comparative law.

This Commission took suo motto notice and cognizance of the ethnic cleansing of Hindus of Kashmir followed by their human rights violations in exile. It invited some prominent figures of the Kashmiri Pandit community along with the victims of genocide to testify before the Commission and give their statements on the burning issue through the virtual mode. This author, in the capacity of his being a frontline human rights activist in the displaced community of Kashmiri Pandits, was also invited to present his statement about the case of genocide of the Hindus of Kashmir.

The US based International Commission has recognised officially, in its statement on 28th March 2022, the acts committed against the community as genocide. It will have definitely a tremendous impact on the future course of action of the government of India and the US administration regarding the issue of Kashmir and Kashmiri Pandits. Therefore, in order to arrive at the truth and provide justice to the victim community, the government should establish a court of enquiry and/or a tribunal as soon as possible. That will lead to the first step of justice for the people who have been treated as the children of lesser gods for decades after their ethnic cleasing in the valley of Kashmir.

(The author is a senior BJP and KP leader, Incharge: Deptt of Political Feedback, BJP-J&K, and can be reached at ashwanikc2012@gmail.com)