Kashmir in vogue with traditional brands 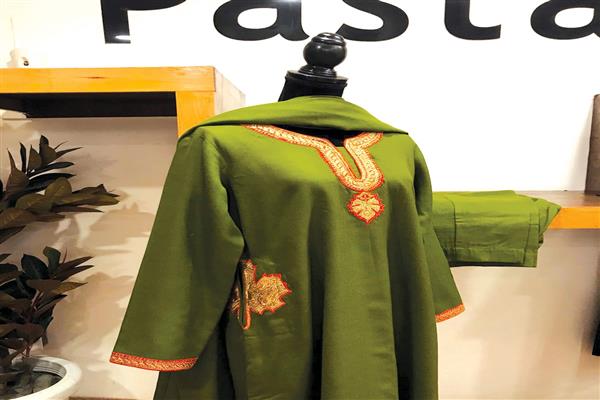 With a motive to add a life to the ‘dying clothing culture’ of Kashmir, the local women entrepreneurs in Srinagar are setting-up their own apparel brands to promote and preserve the decades old traditional art.

In a rising trend, dozens of female entrepreneurs from the past couple of years are setting their own clothing brand rather than buying it from outside.

Rising Kashmir’s feature writer Saba Khan spoke to some of the entrepreneurs to understand the idea of change to revive and promote the tradition and culture of Kashmir.

One of the entrepreneurs, Mehvish Shahjee who is running a clothing fashion store of Kashmiri dresses said that her outlet Pastau is promoting everything that is handmade including handcrafted Kashmiri Tilla and handcrafted sozni.

The outlet Pastau is co-owned by Sadaf Shahdhar and is stationed in Khanyar area of Srinagar.

On asking about the need for more efforts to preserve traditional clothing of Kashmir, Shahjee said, “Definitely yes, we at Pastau have always worked to revive the old traditional Kashmiri Hand-Tilla and Hand-Sozni which has been our legacy for so many years.”

Shahjee also said that the Kashmiri clothing attire was changing and there was an intrusion of westernization in our culture.

She believes that the change is inevitable, clothing trends keep changing and so people keep adapting with the new fashion trends.

“Presently, we can see that Pheran is the most trending outfit and is stitched in a different style which is loved by everyone. No doubt westernization is in our culture but to some extent we have been able to blend both the things in a good way and as a brand we play an important role to set the clothing trend in such a way so as to keep it traditional yet classy,” Shahjee said.

Speaking about the challenges on ground that an owner of venture faces to run the outlet especially in terms of selling Kashmiri brand, she said, “Kashmir has always been famous for its many products and running a brand be it Kashmiri or any other business is a struggle until it is reached to the point where people recognise it.”

Sharing the output of her venture, Shahjee said, “With the grace of almighty Allah, we have been getting very good response and each passing year we have seen remarkable growth.”

She said, “Introducing the pashmina clothing line was a very difficult task in itself since people find it very expensive to buy but we have been getting an amazing response and people are loving our handcrafted Sozni and handcrafted Tilla pashmina dresses which have been one of the hottest selling this year.” Notably, Pastau has been mostly dealing and promoting the Tilla dresses and promoting the local artisans of various backgrounds.

The venture is exclusively run by women folk wherein different teams for every process from manufacturing, dyeing, to embroidery and stitching, everything is done in the different workshops located at various locations.

Another entrepreneur Sabiya who owns the outlet The Mirror—the clothing brand of traditional Kashmiri clothes said that she was only 21 years when she started this business.

“Till the year 2018, this venture was selling the Kashmiri brands only through online medium. However, we officially opened the store in Baghat in 2019,” Sabiya said.

She said that the main motive of her business is to promote and focus on the traditional clothing wherein she wants to keep the legacy of traditional culture alive for the next generations.

Sabiya said, “My motive is to promote the Kashmiri culture throughout the world. The main motive of the outlet is to start the business in Kashmir to create the brand which would be recognized at international level.”

“To preserve the clothing traditions of Kashmir our venture keeps changing the designs to give it a new look but in a traditional way,” she said.

Sabiya says that she was inspired by the fashion shows to be in the business. ”It inspired me to see how people represent their clothing brand and that thing struck in my mind and I started dreaming of starting my own venture.”

“Initially we started selling the Pherans but later we upgraded the venture to designing a different traditional outfit for our clients,” she said.

While talking about the challenges Sabiya says every day is a challenge and to be a successful entrepreneur one must face it to learn from it.

Stating the manpower, the owner of the venture said, “We have seven members in our workshop and all of the members are experts in their respective fields. “All progress takes place outside the comfort zone,” she added.

Likewise, Mehak Bukhari, an entrepreneur who started her outlet KoshuRebel only a month back says that she customizes all sort of traditional cloaks.

Bukhari said that her venture is mainly customizing all kinds of Pheran. “We deal with traditional and contemporary fashion.”

While talking about the efforts to preserve the culture Bukhari said dress is one of the valuable materials of the culture that signifies and expresses the subtle cultural value and social relationships. “I believe designers should look back to preserve the heritage of clothing.”

She believes that with the passage of time Kashmir attire was changing and now the locals were accepting the modernization. “People never forget the real roots, indeed western touch is being added to it but the folks are carrying it the way as it is a traditional style.”

“Every day, we see new brands coming into the market, so there is a lot of competition. There is a challenge but compromise on the quality is never an option,” Bukhari said.

Stating the uniqueness of her venture, Bukhari said the customers are happy with different styles, “Our venture design jumpsuits with Tilla in Jackets, coats with matching pairs of boots. We also customize boots with Tilla and Aari embroidery on them.”

Another entrepreneur Masrat says that she started her venture of designing clothes in a traditional and modern way in the year 2019. The 28 year old entrepreneur’s outlet Vi’En’Rose is in Rajbagh area of Srinagar.

“My outlet promotes all sort of Kashmiri dresses and designs the traditional Pheran and even deals with the Tilla embroidery,” Masrat said.

“I think, younger generation has begun to like and embrace our decades old traditional clothing. All across social media Kashmiri clothing is being flaunted with grace,” she said adding, “I think people have already realized that our traditional attire should be preserved and people are already taking efforts to come forward and to make it happen.”

While talking about the clothing and fashion, Masrat said, “In case of traditional Kashmiri clothing, it may change to a certain degree but at the core it will always remain the same. So introducing westernization into it won’t have any adverse effect on our clothing.”

She said, “For me it is a privilege to run a Kashmiri brand wherein you get a chance to preserve Kashmiri culture and design the clothes that are unique to us.”

Sharing her experience of running an outlet, Masrat said, “It has been an amazing experience to run a business in Kashmir.”