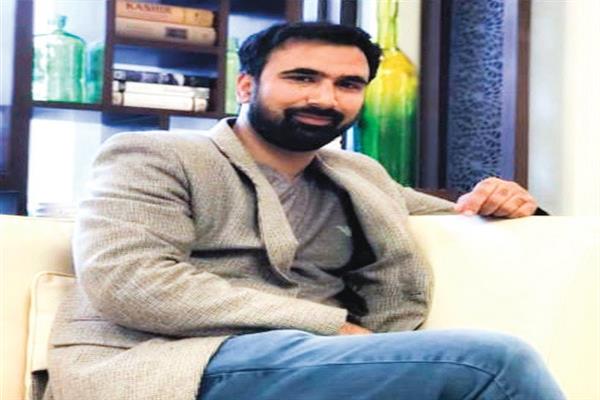 During Covid 19 lockdown, when the whole world was adopting a new work mode called ‘work from home’, an engineer was worried about the plant and flower pots in his office that were silently suffering. This motivated him to devise a smart hydration system so that anyone can hydrate their plant or flower pots from anywhere.

Abdul Wahid, an engineer and an outdoor enthusiast said that humans found a solution for themselves during lockdown but gave no attention to plants in their offices or far off areas.

“I thought of devising a smart hydration system through which care can be taken of plants which are out of reach for us at the time of distress. With the system, a user can water the plants from anywhere without any manual intervention,” he said.

The system also has a water volume control option allowing plants to get the water as required by it and also saves water from getting wasted.

He said, “While I was working from home, I observed that the plants, flower pots or beds were silently suffering. Either we were not able to reach them or we had no time for them due to our busy schedule or other reasons.”

The smart hydration system works automatically without any human intervention. Usually when we water a pot, a person has to manually do the process which most of the time causes overwatering in pots, damages the plants sometimes and also leads to the wastage of water.

The smart hydration system minimizes human involvement by operating in three ways and also reduces the wastage of water.

The project is the amalgamation of two systems: mechanical and electronic. The mechanical part involves the use of a motor, pipes and stand. Electronic part involves giving commands to operate the motor through sensor, internet connectivity or voice command.

The system can be started by touching a sensor. The sensor will run the motor and the water will get to a nozzle through pipes. It also comes with an option for water volume control for drip irrigation purposes for special plants that doesn’t require constant watering. Also, we can fix the particular time slot and the water level for the hydration of the plant.

A sensor will act as an on/off switch. The hydration process can also be started by integrating a user’s mobile phones with the system while keeping the distance. A user can operate the system from his/her homes provided both the ends are connected with internet connection.

The advanced technology that has been used is to operate the system with voice command. “We have used the Alexa module and some other products which work on voice commands,” he added.

At times of no internet, one can use electrical connection to operate. He said that an area comprising 1000 plant or flower pots on 5-6 kanals can be hydrated without any issue. One can also use the system on inverters as it has DC motors.

Abdul said, “Some plants need to be watered slowly until the water is absorbed by them properly. The system is good for those plants as well. Also, the people with busy morning schedules don’t need to care about the watering process. Their job can be done by a single click. A robust system has been made for the system so that it can deliver better performance in all conditions.”

Abdul’s other motivation behind creating the system is to save the water footprints.

“When we water plants, the water overflows the pots which leads to the wastage of water. There is a scarcity of water all over the globe. We can save a huge amount of water by doing these little things,” he added.

He said that in developed countries, irrigation is done through drones and the water is given as per the requirement of the plant and wishes the same idea to be used here as well.

He further said that in Kashmir, his project can be used by the government to hydrate the flower pots used to beautify bridges and flyovers by being in the office. He said, “The manual hydrating process done by the authorities requires manpower as well as huge expense. Plus, the traffic jam and other things led to the hindrance.”

While citing the example of Abdullah Bridge flower pots which could be automatically hydrated, he added that the smart city needs smart projects.

As per the research, on an average, farms around the world account for 70% of all water that is consumed annually. Of that 70% used by farmers, 40% is lost to the environment due to poor irrigation systems.

After pursuing B. Tech from SSM college of Science and Technology, Abdul worked in renowned hotels including Khyber Resort in Gulmarg and Sarovar Portico in Srinagar. He was also project head for 1st international hotel in the valley, Four Points by Sheraton and retired as assistant director of engineering.

Currently, he is working as MEP consultant by the name of tecnext solution and is running an innovative unit, Unitech Engineers. Besides being a nature lover, he treks a lot and always looks for ways to preserve nature.