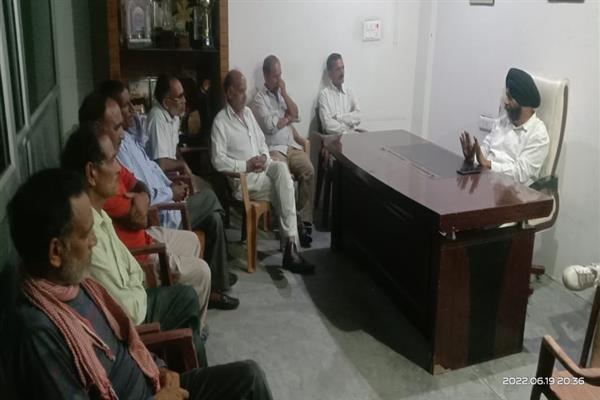 According to a party statement, addressing a meeting here in Bari Brahmana which was organised by ST wing state president ChoudharySaleemAlam, Manjit Singh said that the people are facing multiple issues from development, electricity to drinking water issues.

“The authorities have not been able to provide basic amenities to the people and the Kandi belt where the drinking water crisis deepens every year should have a proper supply related policy but it seems the Govt has hardly planned anything for the future of the thousands of the people,” he said.

He further said that the concerned department has failed to mitigate the growing issue during summers and the people in villages.

Manjit Singh said that the basic amenities like lanes and drains continuously remain an issue for the people as departments concerned are working in a selective manner.

“The residential colonies of SC and ST communities facing underdevelopment and the works projected by them are not considered,” he said, addressing the people.

The people were also concerned about the bureaucratic attitude of the officials in different departments as they do not listen or redress the problems of the people.

“Apni Party is continuously demanding for the holding of assembly elections in J&K as early as possible as it has led to the feeling of alienation in both the regions. There is no accountability of the officials in absence of an elected government,” he said.