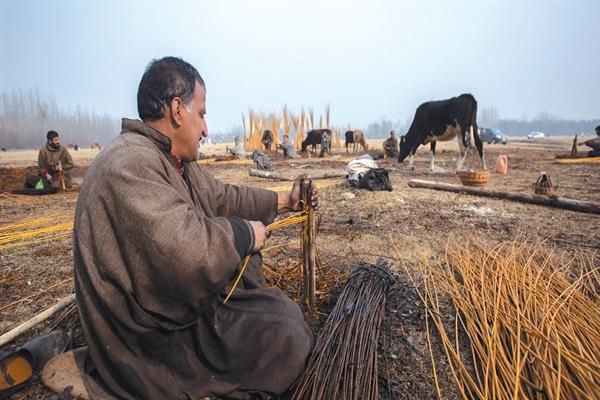 Willow weaving or "Kaeni Kaem" is an indigenous business industry of the valley. It is considered as one of the world's most seasoned artworks and is widely rehearsed in each district of Kashmir.

The willow weaved items accessible in Kashmir are used as household utility things and are also used for embellishing purposes. It is generally used to store food items for everyday use and furthermore for extraordinary events.

It is said that the specialty of willow wicker weaving isn't local to Kashmir however can be traced back to certain parts of central Europe.

According to the artisans associated with this craft since the last numerous years now, the art was introduced to the natives of the Kashmir during the early 19th century.

“Folk tales narrate that 12 kg of seeds and some fine artisans were imported to the valley of Kashmir from European countries by Maharaja Hari Singh during his reign. Since then, art has become a part of the handicraft industry,” they said.

"Prior to that, willow work in Kashmir used to be harshly made of wild willow assortments which are even presently accessible."

However, this native specialty has seen colossal destruction in last a few decades and to restore market at an enormous scope the craftsmen of willow wicker in Jammu and Kashmir have carried some new and imaginative changes to the old plans and once again empowered these items into some excellent items which one can't avoid and purchase.

Ghulam Nabi Rather from Gadoora space of Ganderbal has been into the matter of willow wicker weaving since he was 8 years of age.

"I have been into this business from last 60 years. We used to have a gigantic market twenty years back, even during the distress in 1990's we had an acceptable market," said Rather.

He accepts the ruin to the business was new developments and distinctively planned items made of plastics.

“All these pleasing to eyes products were made of plastic which is not good in any manner. Be that as it may, presently individuals understand the genuine worth of these willow wicker baskets and have begun to purchase again," he said.

The falling deals of the customary wicker bushels were a worry for every craftsman of the valley. Some of them were likewise constrained to support their pay by working at different spots to get their closures met.

Rather was likewise one among the individuals who began working in different places in order to provide food to his eight-member family.

He said his father was probably the best craftsman from Kashmir who used to sell the willow wickerproducts and other enhancing things in different parts of the country.

"The interest was a lot higher around then. We likewise used to sell our items in the bustling business sectors of Srinagar like Maharajgunj, Maharaj Bazar and in Dargah," he said.

Rather said the business is refocusing and they have begun getting orders.

"As of late we got a tremendous request for around 400 small baskets for a wedding capacity which we got practically following 8 years," he said.

These wicker willow baskets are both eco-accommodating and pocket cordial.

"The small baskets cost Rs 70 to 80 and the big baskets costs Rs 400 to 500 and the costs range for other decorative items vary."

The raw material for the wicker baskets comes from the willow vines, and the best climatic condition to grow the Willow is Ganderbal district.

Another craftsman Mohammad Rajab Khanday accepts that the best thing about wicker willow baskets is that it’s completely handmade and natural.

He said the wicker baskets are water-resistant, and also gets stronger when they come in contact with water.

Rajab said the baskets are totally high quality and no brutal synthetic compounds or machines are utilized for its manufacturing.

"It is a hand-talented specialty which was instructed over ages and I am trying to pass it to the future generation," he said, adding“I am attempting to give it to my youngsters yet they don't appear to be keen on taking this up as a profession, so I am myself attempting till I can work and attempting to add some more plans which makes these items really engaging.”

“I make normal baskets for daily use, picnic baskets, vegetable baskets, decorative items which include shapes of different animals, chairs, almirahs and much more,” said Rajab.

“These baskets were traditionally used to carry smoldering coal for locals to warm themselves up during harsh winters in the valley of Kashmir and today we can use these baskets to keep warm or hot bakery items and breads.”

He said, “These baskets were also used by the women to buy and carry vegetables from the market.”

Rajab said he is dealing with creating some more delightfully planned items.

Rajab's wife Sara Begum said the strength of these baskets is exceptionally high.

"I have been putting away garlic and leek in these baskets at the "Baer-Kaeni” (Attic) on the fourth floor of the house and it has never been ruined," she said.

She said she actually stores each consumable item in the wicker baskets.She believes she is healthy because she has never eaten anything which was stored in plastic.

Rajab said, "I presented hued stripes in my items which added more to its excellence. It has worked in a decent way, so we will present and improve and make more wonderful items."

These willow wicker baskets have an immense market in Kashmir.

Long before the word "women entrepreneurs" became common in Kashmir, 60-year-old Noora, has been a successful businesswoman for the past 40 years who not only broke the social taboo back then but was also an inspiration for her family and neighbors.

A resident of Dargah, Noora has a beautiful willow wicker shop just outside the main gate of the Hazratbal shrine where she sells different varieties of baskets, chairs, almirahs and other items.

Noora has been buying products from the artisans in Ganderbal since she has been associated with the wicker business."It has been ages since I am running this shop," she said.

Noora has lived a difficult life, yet despite all the odds she always has a smile on her face.

"I was young when I lost my both parents. Being the eldest among the two brothers and three sisters, the family responsibilities came upon my shoulder," Noora said, with a smile on her face.

After taking over the reins of family matters in her hands, Noora made sure that her siblings wouldn't feel the absence of their parents.

"I was their mother and father both. I worked hard to raise them and make sure that they live a comfortable life," she said.

Noora's brother Ali Mohammad said that she is like a "father figure" in the family.

"We all are old now. But the respect and love that we all siblings have for our elder sister is the same as when we were kids," Ali said.

Ali said it was her sister who sacrificed her comfort and happiness to raise all the siblings.

"We owe everything to her," Ali said.

After taking care of the family, till all her siblings were in a position to earn themselves, Noora got married, however, her happiness was short-lived. Around 12 months of marriage, her husband died leaving a three-month-old baby in Noora's lap.

"After my husband, I returned home with my baby. It was a tough time. After the entire struggle in my life, I finally thought I would live a happy life but it seems my grief was far from over," she said.

Being a tough woman, Noora, without losing hope in life, again rejoined her business to take care of her only children.

"This time my brother (Ali Mohammad) was behind my back. It provided me with a big relief. My brother purchases the products from wholesalers and I sell them in my shop," she said.

Noora is a known shopkeeper in the Dargah market, people from far-flung areas come and purchase willow wicker products from her.

She said, “The business has started flourishing again and I am hopeful that it will get better in future.”

The willow plant is cultivated from saplings. When a sapling sprouts, it is cut off and planted into the land to reap its shoots each year. The sapling keeps on creating a yearly collection until it is removed. Normally the saplings are planted during the long stretch of February and March. An ordinary willow plant grows up two to three meters tall and the yield is reaped in the long stretch of October.

Once the crop is harvested, the withy is grouped into bundles according to length and girth. The industrial processing starts from here and the crop is sold to a contractor who in turn assigns it to various artisans with the description of products that artisan has to make out of it.

As soon as artisan is allotted raw material, the primary work is to soften the withy. This is done by boiling raw willow. Large water boilers powered by a hearth of combustible wood are used for boiling. The bundles are stacked into a boiler and kept underweight by huge boulders. This process of boiling is an overnight affair.

After efficient boiling, the bundles are removed from boilers and are sent down for the next stage. The boiling is followed by peeling off the bark. The removal of the bark is a delicate process and is completed by using a special arrangement of sticks locally known as zealan.

When the bark is removed, the withy is put under direct sunlight for the purpose of drying. The process lasts for several days so the withy is completely devoid of moisture. The dried withy is again grouped into bundles according to length and girth.