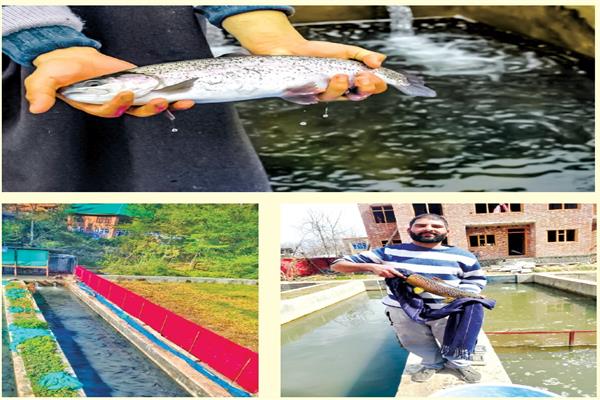 It has been a trend everywhere in our valley that youths after completing their education try their hand in government jobs but mostly don’t get one and end up in the private sector where wages are relatively low and there is hardly any security of a job.

However, the same doesn’t hold true for this young boy from Pahalgam who in order to become self-sufficient right from his school days established his business unit in the courtyard of his house.

Junaid Khanday, a 21-year-old youth from the Kathsoo Sallar area of Anantnag district lives en route to the picturesque Pahalgam. He started earning his livelihood at a time when the boys of his age would be playing in the open fields of their locality.

Junaid set up a freshwater trout farm in front of his house and earned a good income while simultaneously continuing his education. A B-com graduate, Junaid could have easily lived a luxurious life since the family is well off having vast apple orchards while his father possesses a good post in the police department, but instead of relying on his family, he turned the passion of his father into an earning opportunity.

“Back in 2010 my father, who works as Assistant Sub Inspector in the police department, had planned to establish a fish farm on our lawn as he was very passionate about fishing. But due to some issues, the fisheries department didn’t give the clearance.

It was in 2016 while I was in school that I applied for a fish farm after clearing the lawn where we previously had a working water flour grinding mill. Taking advantage of flowing fresh water through our place I provided a detailed project report to the fisheries department which approved a fish farm in my favour. Since then on a small investment, my business has reached newer heights and recently I expanded the fish ponds as the demand has grown very much. I have been receiving orders from outside Kashmir for delivering trout fishes”, says Junaid.

Last year, Junaid received the best performer of the year award from the Department of Fisheries for being outstanding in fish production and sales in the valley. This year Junaid has signed a contract with a firm based in Delhi for the supply of two quintal Trout fish per week much to the hopes of the private fish industry in the valley. Earlier, he would sell around 35 quintals of trout per year locally.

“The best performer award from the government last year has not only boosted my morale but has kindled hopes in many youths in our locality, particularly. Many of my friends are planning a similar business. I have been selling my fish produce across the valley and to top hotels in Srinagar, Pahalgam and local high-end restaurants. I even provide home delivery to my dedicated customers in Srinagar, Awantipora, and Budgam, hundreds of kilometres away from my home,” he said.

He gives much of the credit to the fisheries department which has been supportive all through his years of journey. At the time of establishment they provided every sort of support and even today their extension officers visit his unit frequently.

“The demand for supply is increasing day by day which prompted me to expand my unit this year. A Delhi-based firm will receive freshly packed trout fish from the start of next month and a total of eight quintals they will buy each month from me. Such a response from outside the valley has encouraged me a lot and I feel it is just a beginning”, says Junaid.

Junaid has been regularly employing two locals from his locality besides taking help from his two younger sisters from time to time. He now plans to join a local university for his Masters degree while permanently engaging more employees at his unit.

“As far as the management of my farm is concerned, I am planning to regularise two employees who are already provided work frequently by me. Besides my sisters are there to guide them. The best thing about this part-time fish farm business is that I can continue my education without any hurdles. If God wills I would establish more farms and a mechanised plant to pack fresh trout fish for further national and international markets as exporting the locally reared trout fish is my dream,” he said.

There is a huge demand for Trout fish, especially in our country where the climatic conditions are hot and Kashmir has the distinction of producing the largest quantity of freshwater trout fish. “The industry has the potential to grow tremendously”, adds Junaid.