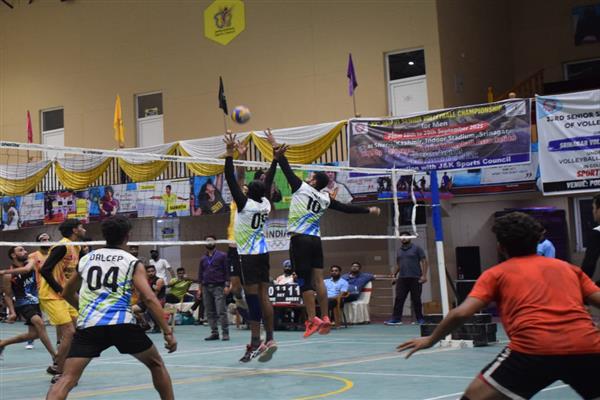 18 teams across Jammu and Kashmir including JKAP having strength of over 300 players/ officials would display their latest skills of game besides acting as ambassadors in their respective districts to spread the message of drug de- addiction and other social evils.

18 matches (of day and night) are to be played daily in this three day event. The event will conclude on September 20 2021.

Secretary sports council Nuzhat Gul was the chief guest on the occasion.

On the occasion General Secretary Volleyball Association of J&K, VK Magotra gave an account of the Championship to the Chief Guest.

The Chief Guest declared the Championship open and urged upon the people especially sportsmen to come forward in patronizing recognized/ professional sports Associations.

She lauded the leading role of Volleyball Association of J&K being played in reaching out to remotest corners of Jammu and Kashmir.

She expressed gratitude to the officials of the Association for successful conduct of South Kashmir Volleyball Championship for boys and girls in which a total 12 teams participated and advocated strongly against social evils.

The chief Guest was presented by momento and was honoured by Kuldeep Magotra CEO and Amir Ahmad  Organizing Secretary of  the Championship.

The first match of championship between Srinagar and Shopian commenced with the introduction of players to the Chief Guest.