Jhelum: a river of faith, friendship and fables 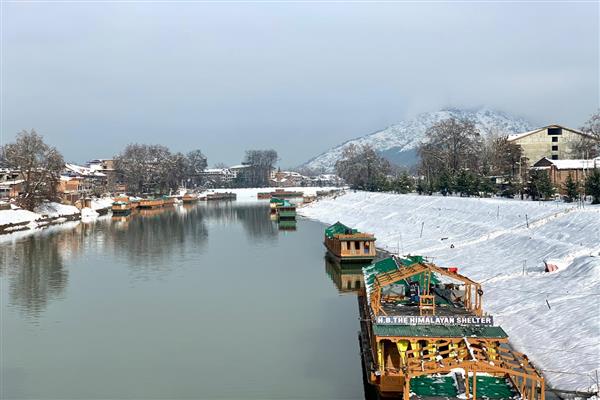 Abdul Samad, now in late 60s, remembers his youth when he would spend much of his time on the banks of Jhelum with his friends under the shade of Chinar tree. Sitting with NadreMonji (local snacks) and talking about things till dawn, he says, with a smile on his face, that Jhelum is his secret keeper.

He said, “We used to bunk from college and sit on the banks of river Jhelum. The crystal-clear water and the singing of birds would make a person feel happy. Children would play on its banks and men would chat for hours.”

In Kashmir, river Jhelum has been the kaleidoscope of faith, fables and much more since centuries. Jhelum, divides the valley into two parts, circulates everywhere like the blood running in a human's body.

The river originated from Khanbal in Verinag and flows through Baramulla, Uri and Srinagar before entering into Pakistan. Many believe that the name of the river has been derived from two names Jal means pure water and hum means snow.

In different languages, it is called by different names: Vitasta in Sanskrit, Hydapass in Greek, Jhelum in Urdu and Vyeth in Kashmiri.

Noted poet and historian, Zareef Ahmad Zareef said the Jhelum stretches from Khanbal in Verinag to Khadanyar in Baramulla. “The civilization of Kashmir is centuries old lead by Hinduism, Buddhism and Islam. According to Hindu mythology, Kashmir was Satisar, the land covered with water,” he said.

He further said that the Vedic sage of Hinduism, Kashap Rishi arrived in Kashmir and he worshipped. Then an earthquake shook the land and the mountain was broken at Baramulla. The water came and accumulated in deep areas which further gave rise to the lakes like Wular lake, Manasbal lake, Hokersar lake etc.

The people who used to live in caves at the foothills of mountains gradually moved towards the water bodies. The first community of people started from water which is locally known as Haenz.

Zareef said that during the period of great kings and rulers like Lalitaditya, Awantiwarman and Budshah, Jhelum was worshipped by Pandits as they were thankful for its favors over mankind.

From time to time, with change in the eras and the rulers, temples, buddhist abbeys and masjids start coming up along its banks. At many places, one can see temples and mosques facing each other on the banks of Jhelum.

“In the same river, Muslims used to take bath, make ablution and pundits would bathe also before entering in to pray. It has washed our sins, body, clothes and turbans. It is a river of faith.”

Centuries ago, Zareef said, the kings would travel from Khanbal to Khadanyar through the river. The banks would bustle with music and dance to welcome the kings with a huge rush of people watching the scene.

“Various songs were sung and band pather was performed on the banks of the Jhelum. In the evening, people would float traditional diyas on its water. Jhelum was worshipped and respected by all the people despite their religion. The river was a heritage and symbol of history,” he said.

At HabbaKadal in Srinagar, a few months ago, a same scene was witnessed near the temple where band pather was performed by some artists. The banks once again marked a huge presence of people after many years which reminded them of the golden era.

The present-day activities involve fishing, moving in colorful shikaras and staying in houseboats. Apart from this, many restaurants have been built near the banks which mesmerize people of its picturesque beauty.

Professor Hamid Naseem Rafiabadi, Head of Department, Religious Studies said that in the holy book Quran, it is mentioned that Allah showered rain and created water bodies and with this water, human life came into existence. “Every river has importance. Earlier, people used to live near water bodies as it was the only source of transportation and trade. Muslims would perform ablutions to purify themselves in the river,” he said.

The river being the source of culture, civilization and economy is also a symbol of purity, cleanliness and spirituality. He said, “The civilization of Kashmir has evolved from the water bodies. Eminent Islamic philosophers have constructed their khanqahs on its banks and they have spread their faith through the river.”

The mosque of Shah-i-Hamdan (RA) or Khanqah-e-Molla stands on the bank of the river Jehlum. It is said that through the river he used to teach faith, culture, heritage, arts and crafts to people.

Walking towards Ganpatyar, Shiv Mandir is one of the temples in the area. Suman is the caretaker of the temple who wakes up every day and cleans the temple on his own. Working as Senior Postal Assistant, GPO, Suman recalled the condition of the temple when he came in 2005, it was all surrounded by dirt and grass. “There was no electricity. I cleaned the temple, cleared the grass and also with the support of the president of a nearby Mosque built a wall around the temple to protect from muggers,” said Suman.

He says the people of the area live in peace. “On our every occasion, we see Muslims participate in our happiness. I have an album for my daughter’s birthday. We had invited everyone in the locality and all came to share joy. Some of them have shifted to other places now. I barely recognize the kids who have grown up when they greet me but I have all the precious memories in that album,” he said.

When floods hit the valley in 2014, Suman lived for days at her muslim neighbor house. Misra Begam, the householder said, “I told Suman ji to come and live with my family. We lived together as a family. It’s our duty to take care of each other in times of distress. We share the same bond and love.”

Misra and Suman’s wife Anjali are more than neighbors.  Anjali fondly calls her Jaji and they often pay visits to each other’s family. When the two women sit together, they enjoy their cup of tea and the laughter fills the room. “She is dearest to me, more than anyone. Our family is far away but she is close to me. He has always helped me and made me feel like a family,” Anjali commented about Misra.

Talking about Kashmiri folk tales, many of them are woven around the glorious river. The houses constructed along the banks of the Jhelum are tightly arranged. The playing space for kids is usually less and they find their way to the banks of Jhelum. Often one can see kids playing on its banks. To keep the kids away from water, elders would often tell tales of mysterious monstrous water creatures.

Suhail Rashid, a local said, “When I was young, me and my brother would play on the banks and our mother would tell us tales about water monsters. Parents would tell such stories to keep their kids away from the river banks for the fear of getting drowned in the water. The river is fascinating and children get attracted to it.”

Suhail’s grandmother would often narrate the folktales to the children of the house. “She used to say that during her time the practice of fishing was disallowed from Sher-e-garh to Tankipora as the then ruler of the valley had put a gold ring around some fish. God knows whether it was true or not but such stories really fascinated us,” said Suhail.

Athar Amir Khan, Commissioner of Srinagar Municipal Corporation, told Rising Kashmir that under Smart City Projects, Jhelum River Front Development Project is the one, where both sides of the riverfront will be developed and the river will be ecologically sustainable and will be a thriving recreational hub.

·         All the Ghats of the downtown area of Srinagar are to be redeveloped. The important monuments and public places around the river will be developed.

·         The aesthetic beautification of the bridges over the river has been taken into consideration.

·         Parks and gardens along the ghats to be reconstructed and maintained. Wifi- Zones and illumination work to be done.

·         Activity space for children’s recreational activities and the display centers for showcasing local arts and craft.

·         The stretch of Zero Bridge to Amira Kadal has been tendered out. For the rest of the portion, a DPR of 18 ghats has been prepared. The preparation of DPRs of important structures is going on. The work will start in the coming months.