This is an occasion to solemnly remember the lives of brave tribal freedom fighters, and to dedicate ourselves to the cause of nation 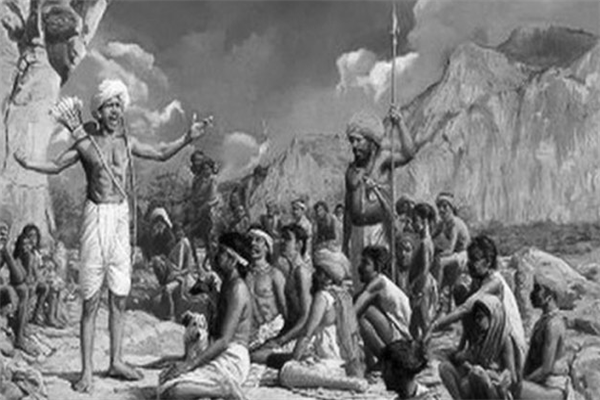 India is a unique country in the world with more than 700 tribal communities. Its strength lies in its rich cultural diversities. The tribal communities have enriched the country’s cultural heritage, through their exquisite art and craft. They have played a leading role in promotion, protection and conservation of the environment through their traditional practices. With their vast repository of traditional knowledge, they have been the torch-bearers of Sustainable Development. Recognizing the important role played by the tribal communities in nation-building, our Constitution has made special provisions for the protection of tribal culture and development of Scheduled Tribes.

The tribal people are simple, peace-loving and hardworking, living in natural harmony in their own habitats, mainly in forested regions. They take pride in their self-identity and like to live with dignity. While establishing colonial rule, the British Raj introduced policies encroaching on the autonomy of different sections of people of the country along with their rights and customs. They took harsh measures to push the people and communities into total submission. This caused tremendous resentment, particularly among the tribal communities, who from time immemorial had preserved their freedom and exclusive traditions, social practices and economic systems.

The entire forest eco-system including water bodies were the mainstay of the tribal economy. The British policies disturbed the traditional land-use systems. They created a class of zamindars (landlords) and gave them the rights over land even in tribal territories. The traditional land system was turned into tenancy systems and the tribals were reduced to the position of helpless tenants. The growing repression by the unjust and exploitative system of imposing taxes and restricting their traditional sustenance coupled with the extractions by the harsh colonial police administration and exploitation by money-lenders fuelled resentment which led to violent eruptions of tribal revolutionary movements.

The characteristics of the tribal movements and reactionary methods used had similar features even though they were spread across the broad expanse of the country. Their foremost common cause was to protect their tribal identity and customary rights on life and livelihood against imposition of repressive laws related to land, forests and livelihood by the British colonial government The movement always was heralded by emergence of an inspirational leader from the community; a leader who was respected to the extent that the community even though spread out followed him/her till attainment of Independence and beyond. The tribals did not adopt modern weaponry and till the end went to the battle with their traditional weapons and techniques.

There are a large number of tribal revolutionary movements which took place against the British Raj and many tribalswere martyred in the process. Some of them are Tilka Majhi, Tikendrajit  Singh, Veer Surendra Sai, Telanga Kharia, Veer Narayan Singh, Sidhu and KanuMurmu, RupchandKonwar, Laxman Naik, Ramji Gond, Alluri Seetharamaraju, Komram Bheema, Raman Namby, TantiaBheel, Gundadhur, GanjanKorku, Silput  Singh, Rupsingh Nayak, BhauKhare, Chimanji Jadhav, Nana Darbare, Kajya Nayak and Govind Guru,  etc. One of the most charismatic of them was Birsa Munda, a young tribal belonging to Munda Community of the present day Jharkhand, who laid the foundation for a strong resistance that inspired the fellow tribal people of the country to relentlessly fight against the colonial.

Birsa Munda was truly a freedom fighter who fought bravely against the exploitative system of British colonial government, and became a legend.  Birsa gave strength to the movement against the British oppression of the tribal communities. He organized and led the tribal movement, giving a call for “Ulgulan” (revolt) to the tribals. The young Birsa also wanted to reform the tribal society and he urged them against intoxication, beliefs in superstitions and witchcraft, and stressed upon the importance of prayer, having faith in God and observing a code of conduct. He encouraged tribals to know their cultural roots and observe unity. He was such a charismatictribal leader that the tribal communities used to call him ‘Bhagwan’.

Honouring the sacrifices and contributions of tribals, Government of India has declared 15th November as the Janajatiya Gourav Divas. This date happens to be the birth anniversary of Bhagwan Birsa Munda. This is indeed a poignant moment for tribals that the struggle of brave Tribal freedom fighters across the country has finally been acknowledged. The stories of valor of these unsung heroes will finally be brought before the world. A large number of activities are being organized during the week long celebrations from 15th to 22nd November in various parts of the country to mark the iconic week to remember the great unsung tribal heroes the nation has produced who have sacrificed their lives.

On the historic occasion of observing the Janajatiya Gourav Divas, the country remembers the many tribal leaders and warriors from across the length and breadth of the country, who have gallantly fought against the colonial rule and sacrificed their lives. We salute their self-less service and sacrifice for the country.

Birsa Munda’s name will forever be taken with same reverence as all the leading personalities of India’s freedom struggle. What he achieved at the young age of 25 years cannot be achieved by ordinary persons. He mobilized the tribal community against the British, forcing the colonial rulers to introduce laws protecting land rights of tribals. Though his life was short, the flame of social and Cultural Revolution ignited by him brought seminal changes in the life of the tribes of the country.

The armed freedom struggle against the British oppression highlighted the spirit of nationalism. This year India is celebrating “Azadi Ka Amrit Mahotsav” to commemorate 75 years of Indian Independence and it will not be complete without remembering and honouring the contribution of innumerable tribals and tribal heroes, who laid down their lives for the motherland.

They laid the foundation for the prolonged freedom struggle. Much before the freedom struggle of 1857, the Janjatis and their leaders had been rising in revolt against the colonial force for the motherland, for protecting their independence and rights. The Chuars and Halbas rose as early as 1770s and till the time when India won independence, the tribals  across  the country had been fighting the British in their own ways.

Be it Santhals, Kol, Ho, Pahadia, Munda, Oraon, Chero, Lepcha, Bhutia, Bhuyan tribes in the East or the Khasi, Naga, Ahom, Meamaria, Abor, Nyishi, Jaintia, Garo, Mizo, Singhpo, Kuki and Lushai, etc., in  the North East; be it the Padyagars, Kurichya, Beda, Gonds and Great  Andamanese in  the South or the Halba, Kol, Muriya, Koi in  Central India or the Dang Bhil, Mair, Naika, Koli, Mina, Dubla  in the West, the tribesmen kept the British Raj on tenterhooks through their dare-devil attacks and fearless battles.

Our tribal mothers and sisters also lead brave and courageous movements. The contribution of Rani Gaidinliu, Phulo and JhanoMurmu, Helen Lepcha and Putali Maya Tamang, will inspire generations to come.

(Author is Minister of Tribal Affairs, Governemnt of India)