It is very important to make people aware that cotton seeds of female poplars do not induce any allergic conditions in humans. However, it could be a carrier of some of the pollen and fungal infections that cause allergic reactions 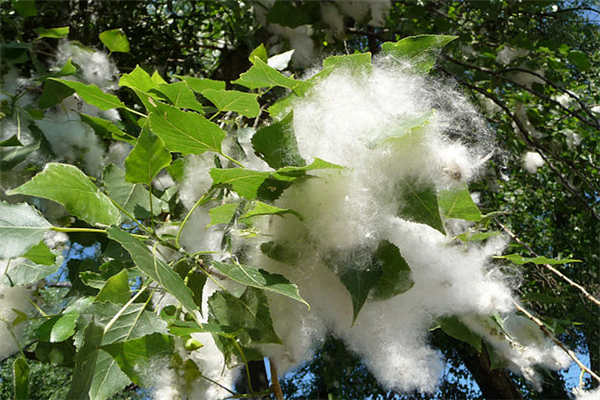 Populus Spp. Or Poplar (Vernacular: Frass: Safeeda) is a genus of 44 species of deciduous flowering plant in the family Salicaceae. It is adioecious species having separate having separate male and female trees. These are widely distributed in the temperate and sub-tropical regions of the Northern Hemisphere. Six indigenous species of Poplars Viz., Populus ciliata, Populus alba, Populus euphratica, Populus gamblii, Populus jacquemontii and Populus rotundifolia are reported in India. In recent years their cultivation has extended to Punjab, Haryana, Himachal, UP and West Bengal. Poplars are grown all over Jammu and Kashmir. A study on trees outside forests by Forest Survey of India reveals that poplars are one of the ten most prominent tree species grown in Jammu and Kashmir.In Kashmir region Populus is a bewildering genus with ancient history of traditional cultivation.

Indigenous species of poplars occurring in Jammu and Kashmir are discussed as under:

Populus ciliata (Jungli Fras):  This species is distributed from Kmr. to Arunachal Pradesh at an altitude of 1300-3000 mt. This is the most widespread species of native poplars, Trees usually occur on the banks of water courses.

Populus euphratica : It occurs in Ladakh region and extends to Punjab and Sindh (Pakistan), Tibet, Afghanistan, Iran, Iraq and Turkey.

Populus alba (White poplar):  It occurs in Kannaur, Himachal Pradesh and parts of Kashmir and Ladakh.

Populus deltoides (Russi Fras):  This is the most widely plantedspecies of poplar in India and Populus nigra (Black poplar): This occurs in avenue plantations in the Kashmir valley. Among the two exotic species while Populus nigra was reportedly introduced as avenue tree around four centuries ago and Populus deltoideswas introduced by Department of Social Forestry during the year 1984. According to FSI report that around90% of the volume realized from Poplars is obtainedfrom the plantation of various clones of Populus deltoides. Locally misquoted as “Rousee Fras” (Russian Popular) though native to North America, a major portion of the plants of Populus deltoides in Kashmir are female cultivars.

Economic Importance or Benefits of poplars

Poplars have been highly adopted by farmers inagro-forestry system in J and K especially Populusdeltoides. They serve as backbone of farm economy in J&K.in general and Kashmir valley in particular and have transformed the landscape by way of extension of greencover outside forest and helped reduce the pressure of forest for timber.

The timber from this species sustains fruit industry by meeting around 40% of 8 to 10 lakh fruit boxes required per annum for exporting the fruit from Kashmir, saving about 3.00 lac Cfts of valuable conifer timber annually. It is used as a timber for trusses and roofs as well as used in veneer industry and for other construction purposes, construction and making of packing crates and match industry. Fast growing with 20-35 CUM/ha/yr.

·         Extension of green cover by way of avenue plantation as well as through Agroforestry.

·         Improvement in soil organic matter without any allelopathic effect.

·         In Kerewas poplars are grown as boundary plantation to prevent soil erosion.

Poplars are fast growing deciduous trees. Populus deltoides locally misquoted as Russi Fras is the most commonly grown of Poplars in agroforestry. Poplars are dioecious species having separate male and female trees.  They have inflorescence in the form of catkins. Catkins of Male poplars are typically smaller and reddish purple in colour. Catkins of female Poplars are significantly larger and greenish in appearance. Female Poplars produce seed enveloped in cottony tufts for dispersal by wind.

Myth: The cotton produced by Poplars is Pollen

Fact: The cottony tufts are appendages of seeds essential for their dispersal

MYTH: Allergy is caused due to cottony tufts of poplars

Fact: Allergy is caused due to pollen of other tree species which may be trapped in these tufts also.

The Poplars were introduced in J and K in large scale in 1980’s, meet 80% demand of fruit boxes and 14-15% of raw material for veneer/ply board industry. The exotic species of Poplars adapted well to the local climate with a temperature range of -100C to 380C.

There is sexual dimorphism as male and female sexes occur on separate trees. The flowers appear in spring season when trees are still leafless. The Poplars are wind pollinated and fruits ripen from ending May to early June.  Ripe fruits release small seeds which have a mass of long, silky hair to aid their dehiscence by wind. Seed production in Poplars starts when the trees are 5-10 years old, increasing rapidly in amount as the trees become older and larger. Annual seed production estimate of a single open-grown tree have been estimated as high as 48 million seeds. The Poplars introduced in JK were propagated vegetatively, multiplying the clones of the same type. Large scale propagation offe male clones start producing seeds accompanied with flying cotton.

There is no authentic research from any expert from the field of forestry or any medical report that has so far revealed that cotton from female poplars or pollen from male Poplars is responsible for any allergy or health issue. The problem of flying cotton can be tackled through systematic research and adopting short and long term measures.

It is very important to make people aware that cotton seeds of female poplars do not induce any allergic conditions in humans.  However, it could be a carrier of some of the pollen and fungal infections that cause allergic reactions. However, people already suffering from allergies of pollen etc. face complications. An awareness campaign and set of precautionary measures can be given especially by the Health and Forest depts. During the seeding period, distribution of pamphlets/ brochures will help a lot.

During the month of April-May female poplars produce cotton which in itself is not allergic, but it could be a carrier to a large number of pollen grains, which could be allergic and are produced by other trees like walnut, Rubinia, Ash etc. People sensitive to seed pollen allergies should use face mask when exposed to the cotton during the month of April-May (generally for 15-30 days) when seeds are shed.

The upper branches of the trees produce more seeds and therefore more cotton than the lower branches, so lopping could help in minimizing the dehiscence quantum. It is believed that 50% lopping of branches can reduce 80% cotton production. Poplar growing govt. departments, Farmers and other growers may be advised to cut down the upper and middle branches before fruit formation during the month of February and March.

The cotton dehiscence from female poplars can also become a fire hazard, due to its highly inflammable nature. The cotton tufts may be collected and destroyed by burning or burying under controlled conditions, so that it does not spread and become a fire hazard, the areas around habitations and agriculture fields need to be kept clean.

Phasing out of female Polars

Mass plantation of female poplar trees within the urban areas/ habitations is the real problem. Identifying female poplars after proper survey in the month of March-April when they start flowering and subsequently removal of the female trees in a phased manner over a period of time will help to curb this menace. Once again it is reiterated that proper monitoring is essential till the trees become reproductive.

During the survey process male poplars should be identified and marked when male catkins are visible. The male poplars can be used for taking the cuttings for vegetatively growing the male poplars.

Biotechnological studies may also be carried out to develop genetic markers to identify and functionally characterize male and female cultivars in early stages in order to eradicate the flying cotton menace. This will help in production of identified germplasm banks or production nurseries with respect to their sex and clonal details.

The private nurseries that are involved in the production of the poplar seedlings be got registered with the Social   Forestry deptt, that would check or provide them certified planting material for multiplication and ultimately distribution to the people. The process has already been started by Social Forestry Department.