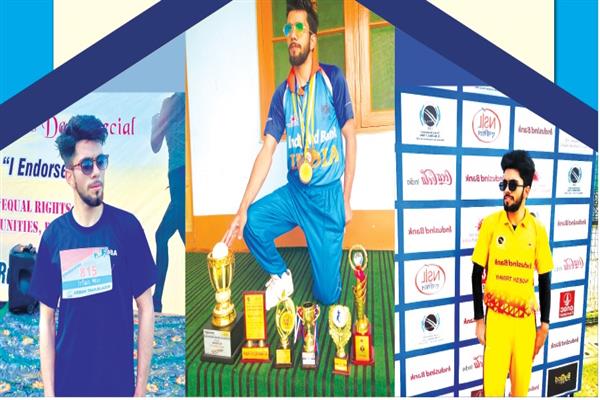 Driven by his determination to chase dreams, a 24 year old visually impaired youth from Pulwama, Irfan Ahmad Mir, proved to the world that specially abled people are second to none. He made a record by scaling the most daunting Siachen Glacier, along with the team of seven other specially abled persons.

The story does not end here, he has proven his mettle even in international cricket by representing the country in India-England bilateral series in 2018 which was won by India by 3-0, played at Bangalore.

He also strived hard enough to make sure that his disability would not come in his way in pursuing his education.

Irfan made it happen with undeterred resolution and belief where a single mistake could have landed him in trouble and even cost him his life.

Hailing from Saffron town Pampore’s Dusoo Village, Irfan is one among the eight persons with disabilities who set a world record by climbing to a height of 15,632 feet on Siachen.

The summit was organized by Conquered Land Air Water (CLAW), an organization floated by army veterans. The organization trains persons with disabilities to achieve rare feats on land, in water, and in the sky.

“Our first feat was to scale Siachen up to the Kumar post on foot,” Mir told Rising Kashmir.

Siachen is the largest glacier outside polar/subpolar regions, in the Karakoram Range of the Trans-Himalayas near the Indo-Pak border. The region has extreme climatic conditions including subzero temperatures, with the constant threat of avalanches, crevasses in the glacier, and high-speed winds.

The team was flagged off from New Delhi on 15 August 2021 and reached Ladakh via Himachal where they were rigorously trained and acclimatized with the cold climatic conditions.

“Our actual climbing started on September 7 and we summited Kumar Post on September 11, 2021. It was a challenge because I was not sure where my steps would land,” Mir said.

He said, walking on the Siachen glacier was a big challenge and climbing it that too in freezing temperature makes it even more difficult.

“Walking through unseen and untouched terrain was a very intimidating job with less margin of error between life and death,” he said, adding that he had made up his mind that he would reach the Kumar post.

Irfan said that there were eight persons on this expedition, four of which were visually impaired three with upper limb and one with lower limb disabilities.

On September 26, 2021, Irfan got applause from Prime Minister of India Narendra Modi in “Maan Ki Baat”, a famous radio program for accomplishing such a feat.

“During my childhood, I used to go to a local school in my native village but I left soon after realizing that they lack infrastructure and professionalism in teaching visually impaired students,” he says.

He claims that his teachers in those days were perplexed as they were not aware of the teaching skills required to teach visually impaired students.

“In 2012 CEO Pulwama organized a 3 days’ workshop under the scheme Sarva Shiksha Abhiyan (SSA) in Boys Central School Pulwama, where I learned how I can continue my study through the Braille Script and audio format system,” he says.

Mir also said that he experienced cricket there for the first time at the age of 13 and came to know about blind cricket from the teachers in that 3-days workshop which extended for around one year. “Soon after which I used to go there daily and learn Braille, etc.,” he says.

Irfan continuously kept searching for opportunities for further studies like other students. “In 2014, I went to the Dehradun National Institute for the visually handicapped for the 3-month adjustment for the blindness course where I learned Mobility and Orientation Braille Computer and Access Technology,” he says.

While doing that course he learned about the National blind cricket tournament which was scheduled to be held in Dehradun.

“It was then I started dreaming about being part of the tournament and luckily, I gave trials and got selected,” he says.

After the completion of a course in 2015, he went to Delhi and completed his tenth standard through the CBSE board.

“Then I went to the National Institute for the blind RK Puram Delhi for a basic computer course. After which I got fully independent to use a computer with the help of a screen reader,” he says.

Irfan completed his intermediate education from Delhi in 2017 and came back to Kashmir for an advanced computer course at ITI Pampore.

But to his utter shock when he asked for admission ITI management denied his request citing the reason for his rejection behind that ITI was not designed to impart education to specially-abled persons like him.

“Believing that it was my legal right to get admission into mainstream society, I raised my grievance at the Jammu Kashmir government grievance cell, and after four months of hard struggle, I finally was enrolled there,” he says.

In 2017, he appeared in trials for selection for the world cup where he was one among the top 50 blind cricketers across India but could not qualify. It was not enough as he had to choose either to complete the course at ITI Pampore or to take part in cricket trials.

“I was a national player at the time so this was the great opportunity for me when I could have been selected in the Indian team to represent the country in the world cup so I decided to leave the course but not cricket,” he says.

Then, he continued his studies through distance mode and got admission to Delhi University for pursuing graduations which he completed in 2021. He has done diploma in Japanese Medial Manual Therapy in Dehradun.

“Later, I went to the Blind Relief Association Delhi for a diploma in Computer Education which is affiliated with the Rehabilitation Council of India,” he says.

Irfan has been a mountain lover since his childhood, which eventually pushed him to pursue his dream of mountain climbing. “I have loved mountains from my childhood, I have been inspired by many mountaineers from Kashmir but most impactful to me was Nahida.”

He has played many sports which include blind cricket and football, blind Kabaddi, para-athletics.

“I have played blind cricket in many states from across India like Andhra Pradesh, Gujarat, Karnataka, Maharashtra, Uttar Pradesh, and other North Indian states. Besides, I have played blind football at Dehradun, Uttarakhand, and blind Kabaddi at Delhi,” he said.

He has also represented Jammu and Kashmir in National Para Athletics at Bangalore.  “I have played my first nationals at Dehradun in 2014, played for the Uttar Pradesh team till 2016,” he says.

Irfan along with some of his colleagues have also made the Jammu Kashmir blind cricket team and participated in the North Zone tournament in 2017.

In a message to other differently-abled persons in the valley, Mir said they must turn their weakness into their strength.

“I believe if the Almighty has given one a challenge to prove their worth, they must accept it gratefully and make their weakness their strength,” he said, suggesting if someone has weakness in one way, they should utilize other bestowed things in the best possible manner to chase their dreams.

“If you don’t have legs but have your mind, use it and turn the tide to your side and make your name in the world. Never lose hope, have trust in Almighty and yourself and you still can achieve many things in life. Believe in yourself, never give up, keep striving for success with repeated attempts and never stop trying till you make it happen,” he said.

Talking about the obstacles he faced he says that everyone has obstacles or hurdles to overcome in life as far as he is concerned his major obstacle is a medical one as he had been blind since his birth.

“By receiving extreme sympathies from the people around oneself instead of words of encouragement pushes persons like me at the back-foot thus forcing many differently-abled persons to cage themselves in their homes,” he asserted.

He added that the perception about the differently-abled persons in the valley is very wrong and needed to be changed.

“What we actually need is accessibility to different avenues which a normal person enjoys, lift for wheelchair-bound persons which many times forces them to seek the assistance of a normal person to reach the third story of a building due to lack of ramps,” he says.

He added similarly, a blind person cannot access the government or private website in this era of the internet, though there are caption codes available that are very hard to access to the internet.

“In  western countries there are audio-assisted challenges which can be easily accessed by blind persons through audio recording,” he says.

While expressing his anguish at the way people treat blind people he said that while traveling through local buses for different destinations people make them feel pity.

“Blind persons at times feel as if all the miseries of the world have overpowered them which eventually compel them to think as if they are not part of the same world,” he laments.

He is of the view that the government must come forward and back them by making available some of important facilities.

“I have not received even a single assistance from the government to date which sometimes de-motivates me and other differently-abled persons,” he says.

He said that it is family support that motivated him for whatever he has achieved so far in life.

“I am waiting for sponsorship for climbing Mount Everest, which I did not receive so far,” he says.

He credits his achievements to the Almighty, his family, friends, and the people of Kashmir.

“I want to represent India in the world cup and climb Mount Everest at least once in my life,” he says.