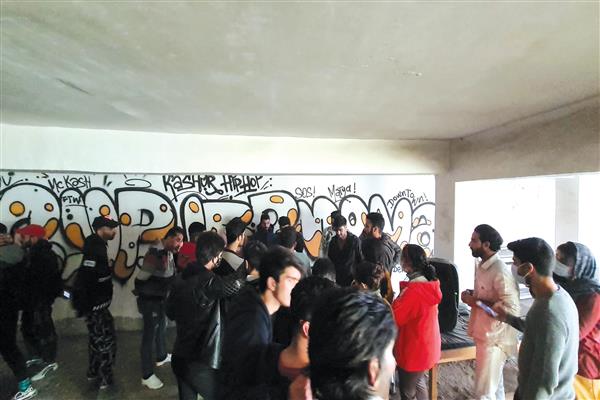 A stairway leading to an empty floor resonate with the vibrant beats and bars of the artists. An artist spit bars, another one starts beatboxing and the spectators, who also practice the art, nod their heads and raise their hands in unison.

This is the underground gathering of the various hip hop artists, song writers, music composers under the name - Cyphernama, painted in bold letters on the wall.

In Cyphernama, every artist gets face to face with the other artists to present his/her craft but there's no competition. Rather than the winning or losing, it is about the love for their art.

One of the artists, Rapper Annie comes all the way from Budgam to Srinagar and attends every cypher. For her, it’s a chance to showcase her talent and connect with the spectators.

Recalling her previous cypher experience which was her first performance outside school, she said, “I was very nervous. I was the only girl performing with boys but I got exposure to perform on stage.”

She believes that a female rapper gets fewer opportunities than her male counterparts and Cyphernama is a place where she can hone her skills and would get more chances to perform live. “Cyphernama is more than a platform. It’s a vibe. Such things have not happened in Kashmir before. I have to make my space in the field and this is helping me. Performing in front of people has a different feeling and more people start knowing you as well,” she said.

Attending and performing in cyphers have made her more confident. Annie can face the larger audience now.

The team behind the Cyphernama is a group of five friends from Kashmir who share the same interest and work for the same motive of providing a platform to hip hop artists.

Janees, one of the members of the organizing team said it can be a new concept for the larger mass in Kashmir but it’s not that all people don’t know about it.

“Cyphers have been there for a very long time in terms of rap, beatbox and dance. Even in Kashmir, most of the rap scene has been discreet for a very long time and it did not emerge till everyone knew MC Kash. Cyphernama conceptualizes these underground scenes in an age where rap is already making a buzz,” she said.

She said that the team is conceptualizing a space where they are seeing all the underground artists which are not known to people. It is an open space for each and every one who is identifying them as performer or an audience.

Cyphers are derived from hip hop culture. “Staying true to the spirit of cypher,” Janees said. Most of the hip hop scenes happen in underground locations so the locations of cyphernama events are also underground, mostly in unfurnished buildings.

“As an audience, the atmosphere which gets evoked becomes unbeatable for me. Rather than the event getting attention, it should be the artist and his art that should make the noise,” she said.

The underground locations create an immersive atmosphere for everyone and the infectious flows of beats and rhythms of the different artists add to it.

She said, “It gets better with every episode. Many young people came up with their own tracks. They were even experimenting with some musical rap where they rap and also sang a part of the song that they had written. This was a lovely fusion of two things. We are not strictly identifying a section of artists. Every time it’s a revelation for us as well. Something new is being presented or experimented with their creativity.”

Apart from Janees, other members of the organizing team are Asim Khan, Hashim Qazi, Sabia Rasool and Humzah who simply identify themselves as lovers of hip hop and feel there was a dire need of a space like Cyphernama.

“Artists have kept their talents hidden. We keep talking among ourselves and with emerging artists that if tomorrow we won’t conduct it, this should go on. Artists should go on. This enthusiasm, ritual should go on in any form or name,” she added.

Talking about the challenges, she said that one has to do it in a society where people are not exposed to this for a very long time. “For larger population of Kashmir, hip hop doesn’t fit in the lens of morality or cultural attributes. Even that has not stopped the artists from writing and performing or venting out their creativity. That doesn’t mean they should never get a space. It creates solidarity,” she said.

But she also feels good that the space that they have created has been marked by the people who were non- judgmental about it and were thoroughly enjoying what they love and cherish.

The first Cyphernama was conducted in October and till now three episodes have been done. The registration for the performers as well as audience is free.

Hashim Qazi, another member said that despite various artists trying to revive the hip hop culture time and again, an emerging artist still has to struggle due to the fewer avenues. “Many reasons deprive the artist of growth be it society or parental pressure. During Covid, I came from Bangalore. We met some artists and came to know about other artists too. This is how it started,” he said.

After observing that the skillful artists of Kashmir get signed by the reputed label from outside, prompted him to think, “Why can’t we have such a scene where our artists need not to go outside?”

He said, “This process is huge and this is the small step towards it. There would have been cyphers happening earlier as well but we aren’t sure about it due to the absence of social media. We are leveraging that any artist who has just started or is doing for a long time, should get the hope that he and his skill should get a platform.”

For hip hop heads, he says, atleast once in a month, cyphers should take place where interaction among artists, network building and scope for collaboration should be there along with more and more learning to reach to the masses.

Calling this a warming up, he believed future cyphers will be able to take place in a better way. “We are focusing on audio systems and more audiences to show up. There is room for a lot more. We consider it very seriously. This should be a culture where music and art should be promoted to a level of mainstream. We are adamant that this should keep going because in Kashmir you get a lot of factors not to do this. Come what may we have to do this,” he said.

Also in future, the organizers are looking for different ways of online mediums to promote the artists.

The team believes that the Cyphernama will be made successful by the efforts of artists. “Whether an artist is a big name or is still emerging, Cyphernama is there for all. If you have made it you can help your Kashmiri brethren to reach there. If you have not made it yet, you can reach there. Be a part of encouragement and optimism that we are trying to give to other artists,” Hashim said.