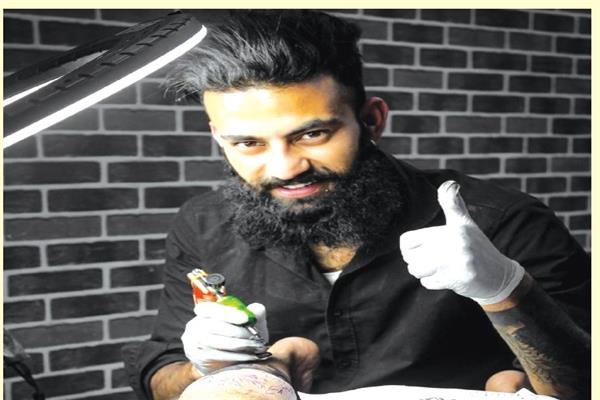 The 25-year-old youth from Srinagar’s Khomeini Chowk area runs a popular tattoo parlor namely Mubiis Tattoo Studio in his locality.  Here not only do the local youth come to get themselves inked with their passionate tattoos but also, people from outside also frequently come to get their tattoos and piercings done at the hands of an ace artist.

Although Mubashir, or Mubi as he likes to be called, considers himself a self-taught artist wherein his passion was sparked by painting and sketching at the first place, he has received formal training in Tattoo art and piercing at Aliens tattoo Art School in Mumbai where the celebrities like Virat Kohli have got their tattoos done.

Mubashir does his own tattoos, and apart from two piercings, he has some seven tattoos on his own body.

“I always do my own tattoos. Whenever I want to try something new or want to experiment with something new, I try it first on my own body,” Mubashir adds while speaking with Rising Kashmir.

Mubashir’s earlier pursuits with professional tattoo-making art started when his friends and family members began to ask him for tattoos. Later on, he learned the art professionally and started a tattoo parlor some five years ago. Now, he is the best in town.

Mubashir has mastered Piercing, Realistic Tatoo art, 3D Tatoo, Water-color tattoo, and many other intricacies of his profession. Mubashir has dived so much into his art that he can draw a barcode on your body and when people will scan it with their mobile phones, they can get the secret message hidden into it. Of course, it’s a swell way to hide adorable texts for your loved ones in it, but he doesn’t want to stop at that; he wants to take it to the next level where a person can hide a sound in his tattoo. How endearing must it be to hide a lovely message for your loved ones in a tattoo?

“No one in the world has done the sound tattoo yet, but I guess I can pull it off. I am working on it,” Mubashir adds with a tinge of ambition in his voice.

Apart from all sorts of conventional piercings, Mubashir has also introduced the traditional conch piercing again in the valley. Previously, the Pundits of the valley used to do the conch piercings and still many from the community frequent his shop to get their conch piercings done.

He also makes temporary tattoos for those who want to enjoy the timely thrill of a tattoo but do not want to get scarred for life. But even if those who feel that they have scarred their body with unnecessary ink, Mubashir is always there to help them with Laser tattoo removal.

During the past five years, Mubashir has also been a great help to those seeking Vitiligo skin correction. Using his skills, he helps them get rid of the vitiligo patches.

“We are the first to do the treating of vitiligo in Kashmir. Some people get into problems while trying to get married and others encounter embarrassments in public and workplaces due to their vitiligo patches. We often get people here who say that they wasted a ton of money on medicines and everything but it never worked. Our vitiligo treatment is a one-time thing, and It stays forever,” Mubashir says proudly for having been of help to countless vitiligo sufferers.

Mubashir is also a certified teacher and teaches tattoo art and piercing to young people who are interested in making a foray into the tattoo and piercing profession. The courses include basic and advanced levels.

Mubashir says that he is a strong proponent of passion and believes that societal norms and conventions shouldn’t hamper the youth from following their passion. That is the reason why he helps younger people learn the art of tattoo making and piercing.

In a larger sense, there is still a certain inhibition or say, a frightful stereotype attached to tattoo making due to various religious reasons, but Mubashir believes otherwise. He says that tattoo making has now been normalized by the youth in Kashmir valley.

“A change has occurred in the perceptions of the people regarding the tattoo making,” Mubashir comments. “It is normal nowadays. Earlier tattoo parlors  were not available in the valley, so people would get their tattoos done from outside, but when we introduced hygienic and professional tattoo making in Kashmir, enthusiastic people were eager to get their tattoos done.”

Although previously, there was a rampant practice of tattooing Moon and star on your body or your hands in Kashmir, especially amongst the Generation X and Baby Boomers, the tattoos that are in vogue nowadays are viewed differently. While the old-fashioned moon and star tattoo was a precursor to Islamic identity, the current trend in tattoos is viewed as modern and un-Islamic by the theologians. Mubashir however, does not believe that he is indulging in an un-Islamic practice.

“I don’t think drawing tattoos is wrong according to our religion. It's Makruuh indeed, but not Haram. Music is clearly haram, but everyone indulges in it. Islam forbids us from drawing pictures and signs that are evil or belong to other religions on our bodies. It does not completely say anything against tattoo making. The reason is that when you draw a tattoo, the ink is under your skin, so it does not prevent the water from reaching your skin when you do the Wudhu or Ghusl (Ablution and bath). So it's not as wrong as people believe it to be,” Mubashir believes.

Mubashir says that he minds his own business and thus far he has not got an overwhelming response from the people, especially from the millennials and Generation Z.  Mubashir has a very large following on social media, and his tattoos designs, both chick and vibrant, are a rage amongst the local youth.

While he says that he takes his profession both as a passion and business because he believes that passion should be accompanied by money, in a message to the youth he says that youngsters shouldn’t listen to the traditional perceptions or abide by traditional conventions. “Follow your own passions!” He advises them and says that if they are one of those who wish to make significant strides into any form of art or unconventional passion, they should stay honest and perseverant in their calling.

Mubashir’s father was an auto driver, and it was his passion that gave him success and recognition. He is a testament to what a passion, followed rigorously and honestly, can do for a person. Many may want to become like him, but he advises all to become the best versions of their own selves.