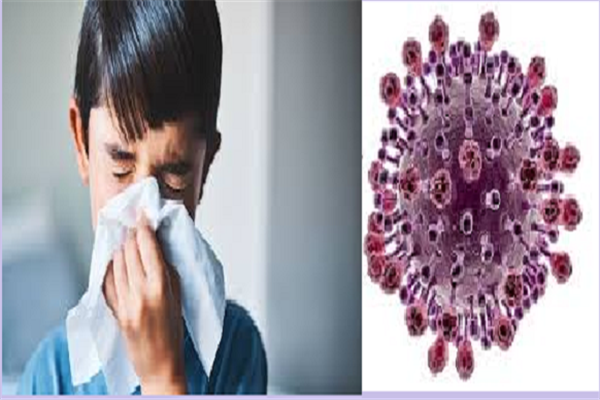 Usually referred to as the flu or grippe, influenza is a highly infectious respiratory disease. The disease is caused by certain strains of the influenza virus. When the virus is inhaled, it attacks cells in the upper respiratory tract, causing such typical flu symptoms as fatigue, fever and chills, a hacking cough, and body aches. Influenza victims are also susceptible to potentially life threatening secondary infections. Although the stomach or intestinal “flu” is commonly blamed for stomach upsets and diarrhea, the influenza virus rarely causes gastrointestinal symptoms. Such symptoms are most likely due to other organisms such as rotavirus, Salmonella, Shigella, or Escherichia coli.

The flu is considerably more debilitating than the common cold. Influenza outbreaks occur suddenly, and infection spreads rapidly. Influenza outbreaks occur on a regular basis. The most serious outbreaks are pandemics, which affect millions of people worldwide and last for several months. The 1918-1919 influenza outbreak serves as the primary example of an influenza pandemic. Pandemics also occurred in 1957 and 1968 with the Asian flu and Hong Kong flu, respectively. The Asian flu was responsible for 70,000 deaths in the United States, while the Hong Kong flu killed 34,000.

There are three types of influenza viruses, identified as A, B, and C. Influenza A can infect a range of species, including humans, pigs, horses, and birds, but only humans are infected by types B and C. Influenza A is responsible for most flu cases, while infection with types B and C virus are less common and cause a milder illness.

Approximately one to four days after infection with the influenza virus, the victim is hit with an array of symptoms. “Hit” is an appropriate term, because symptoms are sudden, harsh, and unmistakable. Typical influenza symptoms include the abrupt onset of a headache, dry cough, and chills, rapidly followed by overall achiness and a fever that may run as high as 104°F (40°C). As the fever subsides, nasal congestion and a sore throat become noticeable. Flu victims feel extremely tired and weak and may not return to their normal energy levels for several days or even a couple of weeks.

Influenza complications usually arise from bacterial infections of the lower respiratory tract. Signs of a secondary respiratory infection often appear just as the victim seems to be recovering. These signs include high fever, intense chills, chest pains associated with breathing, and a productive cough with thick yellowish green sputum. If these symptoms appear, medical treatment is necessary. Other secondary infections, such as sinus or ear infections, may also require medical intervention. Heart and lung problems, and other chronic diseases, can be aggravated by influenza, which is a particular concern with elderly patients.

Although there are specific tests to identify the flu virus strain from respiratory samples, doctors typically rely on a set of symptoms and the presence of influenza in the community for diagnosis. Specific tests are useful to determine the type of flu in the community, but they do little for individual treatment. Doctors may administer tests, such as throat cultures, to identify secondary infections.

Essentially, a bout of influenza must be allowed to run its course. Symptoms can be relieved with bed rest and by keeping well hydrated. A steam vaporizer may make breathing easier, and pain relievers will take care of the aches and pain. Food may not seem very appetizing, but an effort should be made to consume nourishing food. Recovery should not be pushed too rapidly. Returning to normal activities too quickly invites a possible relapse or complications.

Since influenza is a viral infection, antibiotics are useless in treating it. However, antibiotics are frequently used to treat secondary infections. Over-the-counter medications are used to treat flu symptoms, but it is not necessary to purchase a medication marketed specifically for flu symptoms. Any medication that is designed to relieve symptoms, such as pain and coughing, will provide some relief. Medications containing alcohol, however, should be avoided because of the dehydrating effects of alcohol. The best medicine for symptoms is simply an analgesic, such as aspirin, acetaminophen, or naproxen. Without a doctor’s approval, aspirin is generally not recommended for people under 18 owing to its association with Reye’s syndrome, a rare aspirin-associated complication seen in children recovering from the flu. To be on the safe side, children should receive acetaminophen or ibuprofen to treat their symptoms.

Following proper treatment guidelines, healthy people under the age of 65 usually suffer no long-term consequences associated with flu infection. The elderly and the chronically ill are at greater risk for secondary infection and other complications, but they can also enjoy a complete recovery.

Most people recover fully from an influenza infection, but it should not be viewed complacently. Influenza is a serious disease, and approximately 1 in 1,000 cases proves fatal.

The Centers for Disease Control and Prevention recommend that people get an influenza vaccine injection each year before flu season starts. Vaccines should be received two to six weeks prior to the onset of flu season to allow the body enough time to establish immunity. Adults need only one dose of the yearly vaccine, but children under nine years of age who have not previously been immunized should receive two doses, with a month between each dose.

Each season’s flu vaccine contains virus strains that are the most likely to be encountered in the coming flu season. When there is a good match between the anticipated flu strains and the strains used in the vaccine, the vaccine is 70–90% effective in people under 65. Because immune response diminishes somewhat with age, people over 65 may not receive the same level of protection from the vaccine, but even if they do contract the flu, the vaccine diminishes the severity and helps prevent complications.

The virus strains used to make the vaccine are inactivated and will not cause the flu. In the past, flu symptoms were associated with vaccine preparations that were not as highly purified as modern vaccines, not to the virus itself. Serious side effects with modern vaccines are extremely unusual. Some people experience a slight soreness at the point of injection, which resolves within a day or two. People who have never been exposed to influenza, particularly children, may experience one to two days of a slight fever, tiredness, and muscle aches. These symptoms start within six to 12 hours after the vaccination.

Certain groups are strongly advised to be vaccinated because they are at risk for influenza-related complications:

·         Residents of nursing homes and chronic-care facilities, regardless of age.

·         Adults and children who have chronic heart or lung problems, such as asthma.

·         Adults and children who have such chronic metabolic diseases as diabetes and renal dysfunction, as well as severe anemia or inherited hemoglobin disorders.

·         Children and teenagers who are on long-term aspirin therapy.

·         Women who will be in their second or third trimester of pregnancy during flu season or women who are nursing.

·         Anyone in contact with the above groups, such as teachers, care givers, health care personnel, and family members.

An individual need not be in one of the at-risk categories listed above, however, to receive a flu vaccination. Anyone who wants to forego the discomfort and inconvenience of an influenza attack may receive the vaccine.

(Author is a Medical Practitioner. He can be reached on mir.muzaffar@yahoo.com)