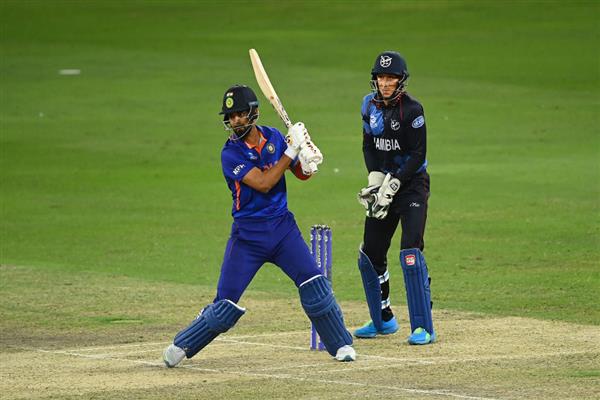 India crushed Namibia by 9 wickets in Dubai to end their T20 World Cup 2021 campaign on a high in Dubai.

They got home with 4.4 overs to spare. Namibia set India a target of 133 in 20 overs. In response, KL Rahul and Rohit Sharma got India off to a flying start again as they took the score to 54/0 after the first 6 overs and registered yet another 50-run stand between them.
Soon after, Sharma brought up his 24th T20I fifty off 31 balls before Frylinck sent him packing on 56. India reached 87/1 at the halfway stage.
A little later, KL Rahul smashed an unbeaten 54 as India cruised him with 9 wickets in 4.4 overs to spare.
In the first innings, while opening the innings, Stephan Baard and Michael van Lingen began well, scoring 31 runs in the first 4 overs. In the next over, Jasprit Bumrah removed van Lingen on 14 before Ravindra Jadeja dismissed Craig Williams on a duck. Namibia reached 35/2 after 7 overs.
In the 8th over, Jadeja scalped another as he sent Baard packing on 21 by trapping him LBW. Then, in the 10th over, Ashwin got the better of Loftie-Eaton on 5. Namibia reached 51-4 after 10 overs. Ashwin and Jadeja finished their 4-over quotas with three wickets each as Namibia stuttered to 95/7 after 16 overs.
Eventually, courtesy of Wiese's 26, Namibia posted 132/8 in 20 overs.