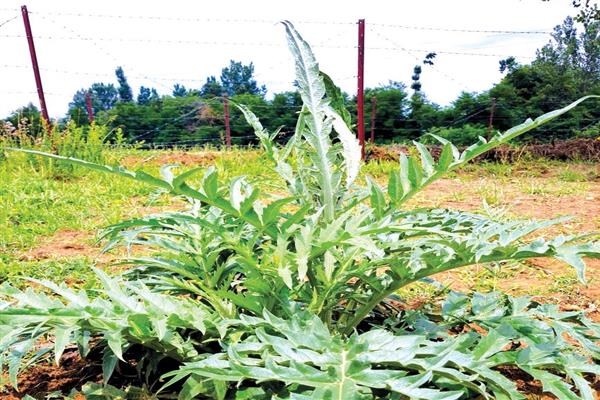 Kashmir Himalayas are home to various species of high value medicinal plants with more than 600 species finding its use in traditional system of medicine in one or other form.

Because of their phytochemical properties and bioactivity, these plants now found use in the modern pharmaceutical and therapeutic industry as well.

Picrorhiza is used for treatment of liver and upper respiratory tract issues. It is also used to reduce fevers, and to treat dyspepsia and chronic diarrhea.Podophyllum hexandrum is used in drug forprostate cancer.

However, wild crafting of these plant species has threatened their existence in their natural habitats and many of these high value high altitude medicinal plants of Kashmir have been listed as endangered species by the International Union for Conservation of Nature (IUCN) Red Book, which is the world's most comprehensive inventory of the global conservation status of biological species.

“Decline in number of medicinal plant species is a serious concern because extinction of these prized species will affect livelihood of many people as well as impact ecological balance in nature,” researchers say.

“These high altitude rare plants have tremendous demand in local market, in pharmaceutical and therapeutic industry, where they are subjected to processing in their crude form for obtaining some useful drugs and products of high value. The medicinal plants are an important source of income for many people in Kashmir,” said Dr Shahid Rasool, Senior Scientist in Genetic Resources and Agro- technology.

Dr. Shahid said that people are resorting to wild extraction of these plant species from interiors of forests that pose a serious threat to the sustainability of the precious biodiversity.

“If a parallel conservation programme is not run for these valued plant species they will be threatened to extinction,” he said, adding that there is need for a contingent plan for conserving these plants and maintaining a germplasm under captive cultivations.

He informed that the Field Station of CSIR, IIIM, Bonera, Pulwama serves as a unique facility where they are in pursuit of conserving these medicinal plants for further scientific explorations in the drug discovery programmes of the Institute.

"We are bringing these rare plant species from different ecological niches of Kashmir Himalayas and consolidating them over here at the farm, we run a parallel domestication programme,” he said.

The senior scientist said that they are also bringing new plants that are listed in IUCN Red Book as endangered and are on the verge of extinction.They plan to work closely with the Jammu and Kashmir Forest Department for a joint programme of conservation for endangered plant species of Kashmir.

"We are contemplating to develop a Himalayan Biodiversity Park at this Station over an area of around 2 hectares where we will bring rare and endangered plants, around 50 species, from wild ecological niches across Jammu and Kashmir and introduce them here in this research station, we will explore ways for their domestication and further bio-prospection of such species for screening of novel bioactive molecules,” he said.

He further said that the facility of CSIR IIIMis a huge bio-resource owing the geographical area it possesses.

“The activity undertake at this field station is unique. This is exceptional because no such activity of such magnitude is conducted in the entire North India including Haryana, Himachal, Punjab and even UP,” he said.

He said that they are working on diverse aromatic and medicinal plants including domestication of Saussurea costus, Picrorhiza, Artemisia species, Hypericum perforatum and Podophyllum hexandrum. They are also working on developing technology for utilizing these plant species.