When one or more parathyroid glands malfunctions, it can lead to overproduction of the hormone and elevated calcium level in the blood. Therefore, a common result of hyperparathyroidism is hypercalcemia, or an abnormally high level of calcium in the blood 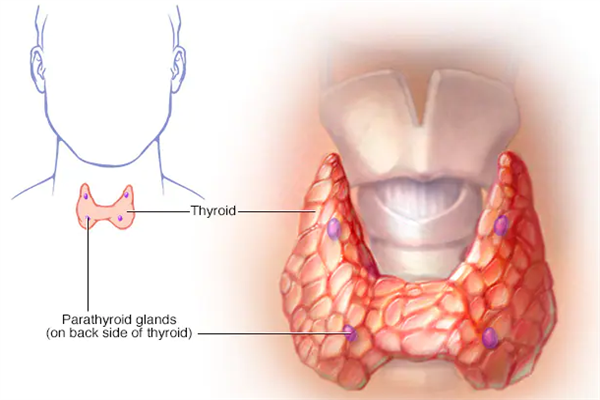 Parathyroid glands are four pea-sized glands located just behind the thyroid gland in the front of the neck. The function of parathyroid glands is to produce a hormone called parathyroid hormone (parathormone), which helps regulate calcium and phosphorous in the body. Hyperparathyroidism is the overproduction of this hormone.

Thyroid glands and parathyroid glands, despite their similar name and proximity, are entirely separate, and each produces hormones with different functions. Hyperparathyroidism may be primary or secondary. It most often occurs in those over age 30, and most commonly in patients 50 to 60 years old. It rarely occurs in children or the elderly. Women are affected by the disease up to three times more often than men. Normally, parathyroid glands produce the parathormone as calcium levels drop and lower to meet the demands of a growing skeleton, pregnancy, or lactation.

Often, there are no obvious symptoms or suspicion of hyperparathyroidism and it is first diagnosed when a patient is discovered to be hypercalcemic during a routine blood chemistry profile. Patients may believe they have felt fine, but realize improvements in sleep, irritability, and memory following treatment. When symptoms are present, they may include development of gastric ulcers or pancreatitis because high calcium levels can cause inflammation and pain in the linings of the stomach and pancreas.

Most of the symptoms of hyperparathyroidism are those present as a result of hypercalcemia, such as kidney stones, osteoporosis, or bone degradation resulting from the bones giving up calcium. Muscle weakness, central nervous system disturbances such as depression, psychomotor and personality disturbances, and rarely, even coma can occur. Patients may also experience heartburn, nausea, constipation, or abdominal pain. In secondary hyperparathyroidism, patients may show signs of calcium imbalance such as deformities of the long bones.

Diagnosis of hyperparathyroidism is most often made when a blood test (radioimmunoassay) reveals high levels of parathyroid hormone and calcium. A blood test that specifically measures the amount of parathyroid hormone has made diagnosis simpler. X ray examinations may be performed to look for areas of diffuse bone demineralization, bone cysts, outer bone absorption and erosion of the long bones of the fingers and toes. Hypercalcemia is mild or intermittent in some patients, but is an excellent indicator of primary hyperparathyroidism. Dual energy x ray absorptiometry (DEXA or DXA), a tool used to diagnose and measure osteoporosis, is used to show reduction in bone mass for primary hyperparathryroidism patients. Once a diagnosis of hyperparathyroidism is reached, the physician will probably order further tests to evaluate complications. For example, abdominal radiographs might reveal kidney stones.

Hyperparathyroidism cases will usually be referred to an endocrinologist, a physician specializing in hormonal problems, or a nephrologist, who specializes in kidney and mineral disorders. Patients with mild cases of hyperparathyroidism may not need immediate treatment if they have only slight elevations in blood calcium level and normal kidneys and bones. These patients should be regularly checked, probably as often as every six months, by physical examination and measurement of kidney function and calcium levels. A bone densitometry measurement should be performed every one or two years. After several years with no worsened symptoms, the length of time between exams may be increased.

Patients with more advanced hyperparathyroidism will usually have all or half of the affected parathyroid gland or glands surgically removed. This surgery is relatively safe and effective. The primary risks are those associated with general anesthesia. There are some instances when the surgery can be performed with the patient under regional, or cervical block, anesthesia. Often studies such as ultrasonography prior to surgery help pinpoint the affected areas.

Forcing fluids and reducing intake of calcium-rich foods can help decrease calcium levels prior to surgery or if surgery is not necessary.

Removal of the enlarged parathyroid gland or glands cures the disease 95% of the time and relief of bone pain may occur in as few as three days. In up to 5% of patients undergoing surgery, chronically low calcium levels may result, and these patients will require calcium supplement or vitamin D treatment. Damage to the kidneys as a result of hyperparathyroidism is often irreversible. Prognosis is generally good, however complications of hyperparathyroidism such as osteoporosis, bone fractures, kidney stones, peptic ulcers, pancreatitis, and nervous system difficulties may worsen prognosis.

(The Author is a Medical Practitioner and can be reached on: mir.muzaffar@yahoo.com)