How Kashmiris prepare for winter? 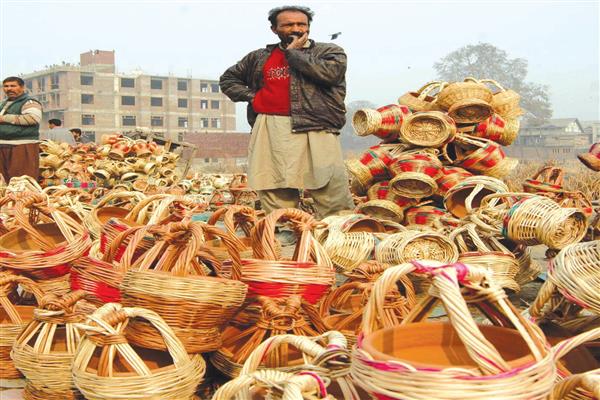 Weather is getting colder day by day; people of Kashmir have embraced themselves for the preparation of winters. With each dip in temperature, the winters reflect different shades of sky. Sometimes it gets difficult to see the sun behind the clouds with every passing day but sun-basking is something that all cherishes in winter.

Traders and businessmen said the market is all set with winter essentials and are witnessing a good demand from people.

People have started to change the furnishing of the house by switching to warm carpets, cushion covers and curtains.

For Nighat, a housewife, this is the hectic job of the household and the first thing she does when the temperature starts decreasing. “I start with wande safai, the process of cleaning house for the winters. I clean up my house before putting in winter furnishings. Multiple layers of blankets are kept below carpets so that the chill from the cemented floor doesn’t reach you,” she said.

Abdul Samad, a seller of house furnishings said “Blankets and winter carpets are in huge demand. Crewel embroidered cushion covers and curtains are expensive but are liked by people for their traditional look. Having good furnishing is very important for everyone in Kashmir otherwise one can’t survive. People usually opt for dark colors of floorings so that they don’t get the hassle of washing them frequently.”

Keeping in view the climatic conditions of the place, earlier the houses in Kashmir were made of mud which acted as a shield from heat and cold. Now, the houses constructed on modern techniques are not warmth resistant.

In winters, unscheduled and frequent power cuts are often witnessed by people and the need for lighting and heating gadgets are felt.

Shahnawaz Ali, a shopkeeper who deals with heating and lighting gadgets said the demand for lighting gadgets has already increased due to unscheduled power cuts happening from the past few days. “Everyone can’t afford to have an inverter in their homes. With the unpredictable power cuts, lighting gadgets are in demand. You can get expensive as well as cheap ones depending on the budget. You can charge them and can be used for many years. Also, they don’t have any undesirable impact on your health.”

In the past, kerosene lamps and candles were used in the absence of electricity which posed a serious threat to health. Years ago, chargeable lighting gadgets replaced the traditional ones. Their price range starts from Rs 500.

Heating appliances like blowers, heaters have started selling in the market. “In absence of electricity, people can use the one fitted with a gas cylinder but one has to use it very carefully as its prolonged use can cause deaths,” he said.

From some years, hamams are used in houses and are proving to be a better source of warmth. As per the experts, Kashmiri hamaans were introduced by the Mughals in Kashmir. It’s an underground room made of rock slabs that generates heat from the firewood placed underneath it.

The harsh winter period in Kashmir starts from Chillai Kalan, when Kashmir freezes at minus temperature. During this period, the place is blanketed with snow and the absence of electricity makes you go for a traditional means of warmth – Kangri.

“There are different types of Kangris based on their shape and the warmth they provide: Chari Kangri, Bandipore Kangri and Islamabad Kangri. Kangri is still used in many households, be it rich or poor. The demand for Kangri is good but in the coming months particularly in December, it will be selling like hot cakes,” Abdul Majeed, a Kangri seller said.

For charcoal shops, the season has started. Trucks and carriers loaded with charcoal are seen on roads. Ghulam Mohammad Langu from Azam enterprise said, “We get the coal from Rajasthan and supply 1 to 2 trucks to distributors per day. Also, customers directly come to our shop to get charcoal.”

He further said in old city Srinagar, the usage of charcoal is more than the civil line areas.

In some places, charcoal is made by people on their own by burning leaves and twigs of the trees. The fallen dry leaves of the trees are burnt. Then the water is sprinkled all over the coal and is then kept to dry. This practice is usually done in villages and in some parts of Srinagar as well. The charcoal produced by this way is called Pane Cheene in Kashmiri.  However due to environmental concerns, the government has imposed a ban on the practice.

Kerosene oil and gas cylinders are also stocked at homes.

Winter preparations are incomplete without the shopping of winter clothes and shoes. One can’t even think of doing daily activities without wearing enough clothes. To stay warm, people in Kashmir wear three to four layers of clothes.

Dealing with Kashmir arts, Ishfaq from Samdhani store, said from last week of September, people have started shopping for winters. “Pherans, shawls and stoles are mostly purchased.  Suits of Cashmelon, Pollywool, Velvet, Shaneel and Supan are sold during winters. In the Pheran collection, Tilla, needlework and aari or chain stitch embroidery is a trend among female folk. Pheran is worn by people of all age groups,” he said.

A young customer, Mehak is ready to face winter chills. She said, “If you wear good clothing, no weather is bad.” Mehak who works in a private company has to go out for work whatever be the weather. “I have bought a Tilla Pheran because it looks very classy when it’s teamed up with jeans, leggings or pants and wears high ankle boots with them. You can wear many layers of clothing under the Pheran to stay warm,” she said.

Ashiq Hussain from Rightway, one of the oldest shoe shops in Srinagar said that the orders have been made for winter shoe collection. He said, “Winter shoes start buying from the first week of November. These days the demand for long boats is good among ladies. Now youngsters want knee high boots because as per them it looks more fashionable.”

He further added, “Nowadays nobody sits at home. These days sports shoes are in demand as well because of their water-resistant properties.  The sale is good and we are expecting it to go higher in the coming days.”

Javaid Ahmad Mir, owner of the shop Shahzaib Enterprises who deals with woolen stuff, said during the pre-winter period, demand for light sweaters and skivvies is more. “People start shopping for thermals when it starts getting colder. Now thermals are used by all so it gets in demand. Also demand for jackets, sweaters, caps and other winter wear increases with decrease in temperature,” he said.

To fight with the bone biting cold, one has to build up immunity. As per elders, pulses and dried vegetables when consumed during winters can help in increasing the resistance towards cold and keep a person healthy throughout the winters.

Fida Mohammad who deals with various food items said that in winters, the consumption of pulses increases in Kashmir. “There are 7 to 8 varieties of pulses available but Red Kidney Beans and Black Masala Beans are mostly eaten by people,” he said while pointing at boxes containing different pulses in front of him.

“As pulses are rich in proteins, they are considered equal to that of mutton. When there was poverty in Kashmir and people couldn’t afford to buy mutton, doctors used to advise people to have more pulses so that they can get proper nutrition. Doctors usually advise to eat chickpeas because of its health benefits,” he said.

Apart from pulses, he said, dry fruits are consumed by people too during winters. “If eaten in the right quantity, it is good for health and has good nutritional value,” he added.

“Dried vegetables or hokh syun was usually consumed when the highway used to close for days and the supply for fresh vegetables was stopped.  Dried bottle gourd is a cure for patients with diabetes.  It protects from catching cold.  Dried dandelion is for new mothers as it is good for backbones. Because of its health benefits, it is consumed by almost everyone,” said Tasaduq.

The tradition of making dried vegetables in Kashmir for winters is decades old. Many people instead of purchasing it from the market start its preparation from summer season and for many it is the source of income. “When the vegetables are too high in price, I cook dried vegetables. They are a good remedy to avoid cold, flu and cough. What are winters without dried vegetables?” said Naseema, a resident of Habba Kadal.