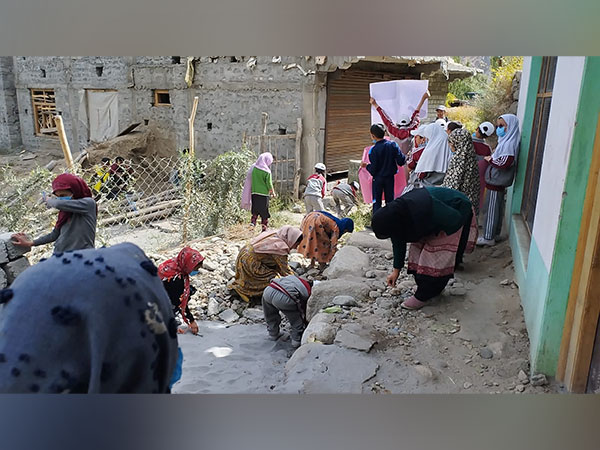 Nestled between the mighty Karakoram and Himalayan mountain ranges lies Turtuk, a remote village, sparsely inhabited, and close to the Line of Control.

From this village, the Pakistani posts are clearly visible. This remote outpost of India has now become a shining example of the Swachh Bharat Abhiyan. The villagers see this not only as a Cleanliness campaign but also one which integrates them with the rest of India. For the villagers, the Swachh Bharat Abhiyan is not just a campaign, but they see it as a medium to integrate them with the rest of India.

Tourism to this remote outpost of India opened in 2010, after that the village started getting plastic waste and other pollutants
Realizing that their fragile relationship with the environment was at stake the local people took it upon themselves to implement the Swachh Bharat Abhiyan in the most remote part of the Nation.

The tourism season in Turtuk commenced largely between April to September and this year it witnessed a large number of visitors from across the country and even from outside the country as it was opened after two years of the Covid-19 pandemic when tourism was hit.

Notwithstanding the boost to the economy of Turtuk from tourism, the plastic and other non-biodegradable waste accumulation was significantly high. Therefore, keeping environmental concerns in mind the owner of a local guest house Hashmatullah and Ms Portia Conrad, a research scholar from New Delhi took the initiative of curating a cleanliness drive in the whole of Turtuk village.

Conrad was visiting Turtuk for an ongoing research project on the Balti community. School children of government schools and Turtuk Valley School also participated in the initiative.

Despite being a holiday and slated exams, 75-plus children gathered to collect garbage on the occasion of Gandhi Jayanti. All the students were provided with masks before the drive and posters were made together for awareness amongst the villagers.

The drive took place from the main Turtuk bridge to both sides of the village.

The cleanliness drive went on for two hours and a total of 57 sacks of non-biodegradable garbage were collected.

Hasmatullah and Portia addressed the children about the concept of 'Swacch Bharat Abhiyaan' and the essence of Gandhi Jayanti and a clean environment to motivate them to protect Turtuk from pollution.

During the drive, common slogans used by the children were - "Saaf karo, saaf karo, apna moholla saaf karo!", "Clean Turtuk, Green Turtuk!", "Bharat Mata ki Jai!", "Vande Mataram!" among others. Interestingly, a few tourists were inspired and joined the drive with the students and the organisers.

The village is often ignored and disconnected from the rest of the country due to its remote location. Earlier, during the "Har Ghar Tiranga " event the residents here only had a small National flag and they felt the need to hoist a large flag which could be seen from the Pakistan side.
The launch of a cleanliness drive in this remote village and the success of the " Har Ghar Tiranga " campaign have sent out a strong message of national pride and integration in almost the most remote part of India.

Villagers of Turtuk said that the Swachh Bharat Abhiyan and the Har Ghar Tiranga campaign are not just words but both campaigns have become a way of life now. They see it as a bond which securely integrates them with the rest of India. They say it is up to them to preserve the environment of India's mighty mountains and water bodies. (ANI)