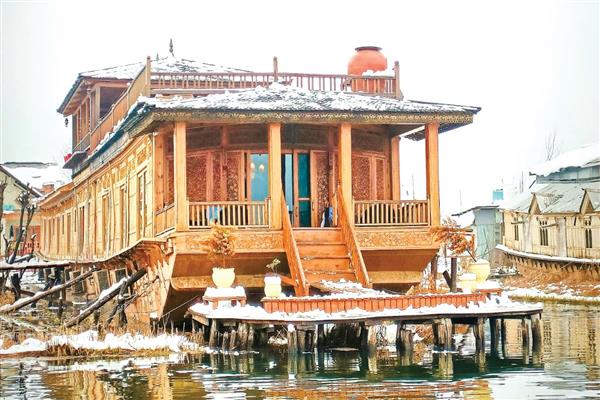 Kashmir diaries would be incomplete for a visitor if he or she does not visit houseboats. The delight in Kashmir does not end with sightseeing or an adventurous tour. Undoubtedly, Kashmir is a beautiful place where you get pleasure in everything. Kashmir is famous for Dal Lake all over the world and so Dal Lake is famous for houseboats. The superior quality wooden made houseboats are being named as gem of the Dal Lake, so a stay on water in one of the greatest pleasures of a Kashmir tour.

Houseboats are the most aesthetic and romantic part of your stay in valley. Besides solitary aspect, these houseboats have filmed in multiple Hollywood and Bollywood movies so far and still filmmakers choose these wooden structures for huge viewership across the world.

In Srinagar, there are around 910 houseboats left in Dal Lake, Nigeen and Jhelum who have been categorized into Deluxe, Class A, B, C and D wherein tourists are being provided superior quality services. If you travel to valley, you must stay in a houseboat once or you are going to miss a great deal here. The boats are simply wonderful. They have a rich architect and a smooth service. The tradition of in province is very old and rich.

As there are a number of water bodies here, so a huge chunk of population derives their livelihood from these waters. Life on water has been a great tradition in region and inhabitants have made arrangements to make their guests’ experience the beauty and wonder of a stay in water.

Jammu and Kashmir indeed is a great tourist destination in the Indian subcontinent that welcomes travelers from worldwide locations. It has still perfectly retained its uniqueness. When in J&K, you can opt to stay in houseboat. It allows you to live on the waters and be as close to nature as possible. The houseboats are made entirely of superior quality of woods and will comfort you with their homely environment, peaceful & mesmerizing surroundings and enchanting views outside. One can find a fully furnished house with formal living rooms, dining rooms, bedrooms, carved wooden furniture and beautifully decorated interiors.

There are generally 1 to 5 bedrooms with attached bathrooms, a common eating area and a balcony. The stunning interiors are of typical Kashmiri style that showcases vibrant colors and art of the region. It is not very difficult to find one that suits your requirements.

Different websites and service providers have categorized houseboats of their own and gave them different rankings however the houseboat union have categorized all houseboats into Deluxe, Class A, B C and D where tourists from worldwide are being provided services at par.

“We have 910 houseboats left in Dal Lake, Nigeen Lake, Chinar Bagh and River Jhelum where guests are being provided services according to the category they wish to stay with”, Mohammad Yaqoob Dunoo, the spokesperson of Houseboat Owners Association spoke to Rising Kashmir.

These beautiful houseboats allow you to be on the water and close to nature with a perfect holiday experience.

The Deluxe houseboats are of superior quality with separate sitting room (lobby), separate dining room, pantry, 4 to 5 bed rooms with attached bathrooms, besides internet facility, cable TV, doctors on call like services to the visitors. In A class houseboats, the services remain same as deluxe category however size of bedrooms happens to be smaller.

Similarly in B class houseboats, the sitting and dining facilities come together there. Also size of bedrooms and other rooms are less than category A.

Under category C and D, these types of houseboats are lesser in size. They look like Donga boats.

To catch the real essence and charm of a Kashmir valley tour, it is mandatory to stay in a houseboat at least once. The wonderful delight in standing on the deck of it and watching the breath-taking scenery around, coupled with a vibrant life on water is an experience unique to valley and can be found nowhere else on earth.

The interior of houseboats in Kashmir are as charming as the outside scenery. The houseboats exhibit the characteristic Kashmiri architecture and are well decorated and designed with typical local wood carving.

The houseboat is being built at some land mass within the waters as it gets easy for the proprietor to push the boat into the lake once it gets ready. The making of these houseboats is not less than any artistic marvel. They are made up of deodar wood that costs over 6000 rupees per square feet while as khatamband costs 2500 to 3000 rupees per sq ft. to make the interior of boats heart winning just like hotels have their categories.

A single houseboat having four to five bedrooms, sitting and dining room, attached washrooms and pantry costs three to four crore rupees approximately, sometimes beyond due to inflation.

Ghulam Rasoon Siah, Chairman Houseboat Owners Association told Rising Kashmir the deluxe category houseboat is the premium one that has all the luxuries available like master bedrooms, luxury bathrooms, luxury sitting and dining rooms, all made up of walnut wood. He however said that the D class houseboats despite having wooden interiors sans luxury facilities.

“A class is almost the same as a 3 star hotel and deluxe competes with 5 star”, he said and added, “All houseboat owners have a category wise license obtained from tourism department”.

Rising Kashmir spoke to few houseboat owners in this regard. Bashir Ahmad, an owner of New Shaheen and Shaheen Palace houseboats of A and B category respectively said they charge 2000 to 2500 rupees per night including meals.

Yousuf Chapri, an 84-old man and owner of Sukoon houseboat said these houseboats were used for transportation and there were more than 2800 boats in Kashmir before 1947. “The numbers have now reduced for several economic and political reasons”, Chapri said.

Giving the logic behind the name Sukoon, Chapri said the name of the houseboat perfectly symbolizes its Sufi meaning, stating peace of mind, wisdom and contentment.

“This is the only houseboat in Kashmir that is longer and wider with full carvings on ceilings, and sides and has got an eco-friendly system for all the bathrooms and nothing waste goes to the Lake”, he asserted.

He said, “I have traveled throughout the world to at least 22 countries and I have never seen a system like houseboat outside”.

Mughal Sheraton, located near Dalgate, Opposite Ghat Number 09, was build in 1989 by the late Mohammad Abdullah Batku but after his expiry his son Bilal Ahmad is running the houseboat.

Mentioning the facilities inside the houseboat, Bilal said they have 3 luxury executive rooms and one suite with Jacuzzi installed bath concept and recently they installed fully automatic Jacuzzi hydro massage vapor and aqua massage bluetooth in the room.

Apart from that, they have toiletries from Bio-Tech Company. “In every room, we have a mini-bar and tea&coffee maker installed”, Bilal said.

Bilal has made boat rooms on theme based like Chinar, Tulip and others.

Mascot houseboat in Nigeen Lake is inherited by the fifth generation of Tuman dynasty. Yaseen Tuman, 45 is the owner of the Mascot. The Tuman family was among the front runners in the tourism and hospitality sector in Kashmir.

“Mascot is the symposium of Kashmiri art and culture. It gives you an idea of the skills of Kashmiri artisans and craftsmanship”, Yaseen said. He also said the beauty of the houseboat showcases the richness of Muslim architecture with intricate carvings.

Tourists usually prefer to stay in boats than in a hotel in Kashmir. This becomes even more common during special occasions. There are a large number of boats in the valley that cater to a huge number of tourists.

If you want to enjoy a mesmerized stay while listening to the sweet sound of the water dancing to the tune of the breeze, you must book a houseboat in advance.