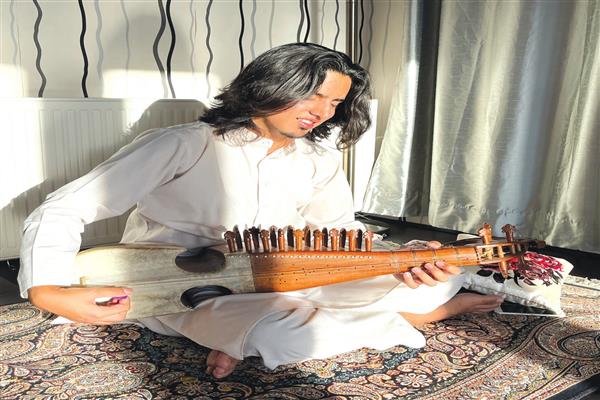 When the soothing sound from the chords of his Rabab reaches the audience, all he gets back is love and appreciation. Sufiyan Malik, a young Rabab player from the Kashmir valley is known for bringing the forgotten folk musical instrument into life.

Rabab, a long-necked lute is the traditional instrument of Kashmir and is believed to come from Afghanistan. Rabab has a rich importance in the music and culture of Kashmir.

Hailing from Nowshera area of district Srinagar, Sufiyan has pursued engineering in computer science and since childhood had an immense passion for music.

When he was 6 years old, his father gifted him a guitar but his interest lay in folk instruments. The guitar was picked by him and by watching YouTube tutorials, he learnt its technicalities. His finest skills at Spanish guitar music got him 1st prize in the talent show, Kashmir Got Talent.

Quite satisfied with what he was good at, he didn’t know that there are more things to learn and a long musical journey to make. His maternal uncles through his grandmother gifted him a Rabab. His grandmother, who was herself a santoor player in her college days, asked him to take interest in any folk musical instrument. The instrument gathered dust for a long time in his room before he rediscovered it. He watched YouTube tutorials and videos of the old folk artists of Kashmir to learn the skills.

In 2015, while he was in school, he came to know that a Rabab teacher, Mir Parvair, had joined a school. He immediately rushed to the teacher to present his skills. “He was very happy to see me performing and he started teaching me. I got so captivated that I missed other classes. He taught me for 3 hours and whatever I learnt in those 3 hours, I still use that,” he said.

In 2016, he made a musical fusion, Firdous X. He is a pirate based on the theme song of the film, Pirates of the Caribbean starring Johnny Depp which went viral and garnered attention towards the traditional musical instrument.

His teacher Parvaiz, who teaches in the music department of Delhi Public School, Srinagar, called him to inform that for a month, he couldn’t have his lunch during the break time at school as more and more kids are turning up to learn Rabab. “The kids used to play the song on TV there and wanted to learn the rabab," he said.

After some time, he came up with The Cure, an instrumental tribute to the famous web series, Games of Thrones which was an instant hit and made headlines in local and national newspapers. In the song, the other musical instruments were also played but it was his rabab that took the track to another level and  struck a chord of millions of hearts.

After this, he got opportunities to take the Rabab at national and global level. He started performing in many parts of India and also did shows at Dubai, Los Angeles, New York, New Jersey. For his contribution, he received a state award in 2020 and was nominated for Padma Shri award in 2021.

Recently, he covered the peppy track featured on Season 14 of Coke Studio, Pasoori on Rabab that completely mesmerized the internet. Sharing the enthralling video on his Instagram account, the video went viral. It was further shared by the singers of the song, Ali Sethi and Shae Gill on their Instagram handles. Coke Studio also shared his video on their official YouTube channel.

He also made a theme track of KGF and other popular Kashmiri and Bollywood songs on his Rabab which sound soothing and are worthy to play on loop.

Malik said that the themed songs are very much liked by people and something that youth can relate with. “This is how I think we can revive Rabab. Playing the trending songs or the songs which are very much liked by the present generation on Rabab can attract the attention of many people. Its sound is soothing and it can touch their souls. Rabab is the only instrument which is our own. It gives us the essence of Kashmir. If we have to take this forward, we have to evolve with time,” he said.

Having worked in a number of short films and musical videos, currently he is a part of a short film.

Malik said that his efforts have borne fruits and he receives a lot of texts where people show interest in buying and playing Rabab.

Getting inspiration from AR Rehman, it’s his dream to make music with him someday.

“I had this vision where youngsters of Kashmir will set a trend to bring back the tradition once again and start hyping it. Now when this is happening, it makes me feel proud of every one of us,” he said.

Praising the culture and tradition of Kashmir for its richness, he said, “We need to go back to our roots and strengthen them. Not only musical instruments, our language, art, Sufism and Saaz culture has to be revived. The more artists will come, more ripples will be created.”

He said that the local artists have played a major role in keeping the language alive through their songs and music. While sharing an experience he said, “In Hardrock café, Pune, I saw Marathis singing Kashmiri songs of Parvaz band and other artists. I was shocked to see. They were singing with such fluency. When non-Kashmiris can sing our songs, why can’t we?” he said.

Malik is on his mission to revive the forgotten asset of Kashmir, he looks forward to the collective efforts from the younger generation in bringing back the age-old musical culture . “We are stars. We disappear from one side and rise from the other. I may not be here forever but my work will be reflected just like stars and will be appreciated by the coming generations. I still have a vision, a path and I will follow it,” he said.