Herath is a wonderful manifestation of understanding, co-existence, assimilation and beauty of thoughts that impact the spiritual and cultural pathways 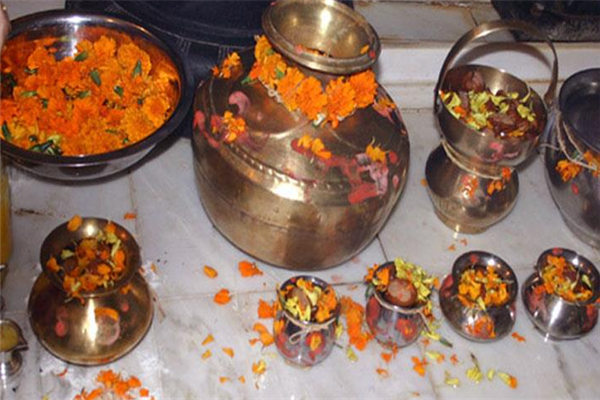 Herath is the most ancient, auspicious, traditional socio-religious and cultural festival of Kashmir. The sons and daughters of the soil, the Kashmiri Pandits, observe it with great dedication and devotion annually. Herath is held generally one day ahead of Shiv-Chaturdashi of Hindu lunar month Phalgun, which falls in February or March every year. There are twelve Shiv-Chaturdashis in a year, but the Shiv-Chaturdashi of Phalgun is considered as Maha-Shivratri.

Herath, which is the indigenous festival of Kashmir valley though independent of Maha-Shivratri is also deeply connected with the grace of Lord Shiva. In fact Herath is dedicated to the two wishful sons of Lord Shiva and his consort Mata Parvati, who are called Vatuknath and Raman (Ramgaudh). They and especially Vatuk Bhairav are recognised as Bhairavs with the divine power of removal of distress (Sankat-Haaree). The reference to the Mahashirvratri festival is in the ancient scripture of Kashmir, the Neelmatapuran.

Herath as it is called in Kashmiri language is the offshoot of "Har-Ratri", the night of Hara -the lord of lords, Shiva. Usually the festival begins from the first day of the Phulgun lunar month with the cleansing process of houses. The establishment of the Vatuk-Bhairav in the form of "Kalashas" in homes is a very significant part and the core of the whole festival. The current puja system is based on a very specific and special way compiled and composed, on the basis of the earlier traditions, by Rishi Logaksha, one thousand years ago, and the Grah-Sutra. A modern look was given to the Logaksha-Padati by Pt. Keshav Bhat Shastri almost a century ago which was later adopted by the Kashmiri Pandit community as the final voice on the subject.

Herath is a wonderful manifestation of understanding, co-existence, assimilation and beauty of thoughts that impact the spiritual and cultural pathways. Vaidik tradition, Advaita philosophy, Shavisim, Kashmir's Sarvastvadin School of Buddhist philosophy, Vajrayana Bhairav-leniage and Vaishnava & Shiva Astuti have found their comfortable place in the tradition of Kashmir and Kashmiri Pandits. The nature-lovers and nature-worshippers; and spiritually oriented community of the Pandits maintained its tradition for the last thousands of years with, without and despite through the vicissitudes of history.

There is a very famous story of history of Kashmir related to one of the unkind rulers of Kashmir, Jabbar Khan, who took over from his younger brother, Sardar Azim Khan, as an Afghan ruler of Kashmir in the early years of nineteenth century and the observance of Herath in Kashmir. Pandit Anand Kaul, the celebrated author of the famous book, The Kashmiri Pandit (released in 1924) on page 69 records, "Jabbar Khan was once told by someone that it was a common notion among the Pandits that snow falls invariably at the Shivratri night (13th of the dark fortnight of Phalgun). To test this, he ordered that the Pandits be not allowed to observe this festival in Phalgun (February-March) but in Haar (June-July). Accordingly, it had to be observed on the corresponding night in the latter month. It so happened that even on this night flakes of snow, preceded by a heavy rainfall which had rendered the atmosphere very cold, fell. The bard then, mocking at him, sang-

Consequent upon the miraculous happening, the local Muslims (who were also irritated by the unjust dictum of Jabbar) turned up for their neighbours and friends, Hindus; on the following day and congratulated them on the occasion. They additionally paid their tributes (Salam) to the deity of the festival for the wonderful thing that had happened. It is with effect from this particular event that the following day of Herath was recognised and called as 'Salam' in the valley and continues to be as such till date, practically. They also called Herath as 'Haeirat' meaning 'Surprising'.

On the occasion of this Herath/Shivratri (33rd in exile), when the report of the Delimitation Commission is about to be finalised, Kashmiri Pandit community is awaiting for the State of India to rise to the occasion and thus recognise the right of the displaced community to get represented politically in the legislature of their own UT called Jammu and Kashmir.

Amit Shah, Union Minister for Home Affairs said in an interview recently that the elections for the J&K Assembly would be held in six to eight months of time. The Delimitation Commission has already proposed six additional seats for Jammu region and one additional seat for the Kashmir region thus taking the total number of the Assembly seats to 90, with 47 seats for Kashmir region and 43 seats for the Jammu region. This is by and large a fair distribution between the two regions in the background of allegations of huge political discrimination with the Jammu region in the given situation. The reservation of 9 seats to the STs has also been realised.

Having said that, there are yet a couple of sections of the population in J&K who have very brittle chances of representation in future with the implementation of the report of the Delimitation Commission. Among these sections that have remained unattended yet, despite meeting the Commission, making their presentations very effectively and convincing the Commission that their pleas have enough substance comprise Kashmiri Pandit community, Kashmiri Sikhs and the people belonging to the Pakistan occupied Jammu & Kashmir (PoJK). These communities have a very strong feeling that they have been treated as the children of lesser gods.

The Kashmiri Pandits made a presentation before the Delimitation Commission on 26 March 2021 at its New Delhi office and later in July 2021 at Jammu when the Commission paid a visit to the JKUT. A number of documents as desired by the Commission were also submitted before it. The case of the displaced Kashmiri Pandits and other minorities of Kashmir is a unique one which the founding fathers of the Indian constitution would have never visualized.

We are also aware that the Commission is working on the basis of the terms of reference and the J&K Reorganisation Act of 2019, therefore, the issue of the Pandit community needs to be viewed from a broader perspective. Accordingly, as their case has a strong and valid substance, so the final report on delimitation may include their reference in it for inclusion by taking up constitutional measures by the government and the parliament.

It may be reiterated that the delimitation issue will test the very intent of the Indian State towards the community of Kashmiri Pandit Hindus and Kashmiri Sikhs living in exile for the last more than three decades. It is the question of their socio-political existence in a state the foundations of which were laid by their forefathers in the past history. Ignoring them in the report would, de facto and also psychologically, close all gates for their return and resettlement in the valley.

The contributions of the Pandit community in the fields of literature, architecture, civilizational flow, medicine, philosophy, music, dance, law, politics, history writing, religion and sociology are well recognised, profound and immense. It will be a worse tragedy than their unfortunate forced exodus if they are ignored in the final analysis, draft and report of the Delimitation Commission. It will be like consigning the oldest community of Jammu and Kashmir to the oldest ruins of history and circumstances. No permutations and combinations can ever get their representatives elected in the J&K Legislature in the given situation.

The displaced community in the hour of their crisis is looking forward to the Delimitation Commission and the government of India for collective justice and fairness. This is possible by a clear reference to the government of India and parliament by the Commission for taking up the required constitutional measures in line with the Sikkim 'Sangha' example, Pudducherry Assembly model of nominations, erstwhile Parliamentary representation for Anglo-Indian community or the nomination of two women members to the Assembly as it existed in the J&K Assembly.

This author has been reiterating that the delimitation exercise is going to test the intent of the State of India towards the reverse minority community of Kashmir, the Kashmiri Pandits, and theirs will be a historic decision from the existential point of view. Otherwise the oft-repeated phrase that "Kashmir is incomplete without Kashmiri Pandits" will remain only on the lips. It is again time to remind the State of India of its commitments towards the displaced people of Kashmir, the victims of genocide, who are both displaced and dispersed due to the failures of successive governments right from 1990.

Undoubtedly, the Delimitation Commission of India and the Election Commission of India are both an integral part of the State of India and are thus expected to play a decisive and historic role, particularly when the representatives of the community were emphatically conveyed that their plea had a lot and sufficient substance, when they made their presentations before the Commission. It is hoped that the strong feeling of being 'the children of lesser gods' of the Kashmiri Pandit community is addressed by the concerned appropriately in this context.

(The author is a BJP & KP leader, Incharge: Deptt of Political feedback, J&K-BJP. He can be reached at ashwanikc2012@gmail.com)