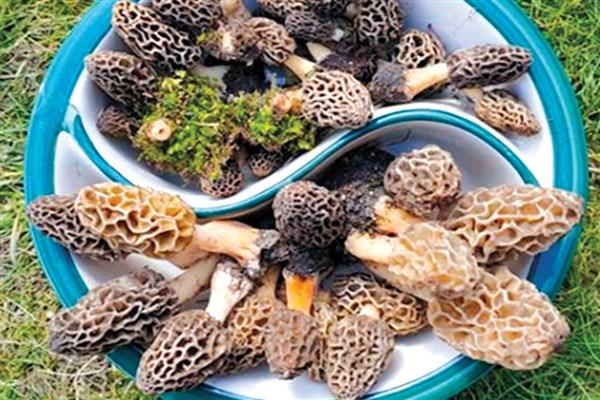 Kashmir is famous for various species of mushrooms. Gucchi, being one such mushroom, is a species of fungus in the family Morchellaceae of the Ascomycota. They are pale yellow in colour with large pits and ridges on the surface of the cap, raised on a large white stem. It is one of the most readily recognized of all the edible mushrooms and is highly sought after.

When it grows in the month of March, it begins as a tightly compressed, grayish sponge with lighter ridges, and expands to form a large yellowish sponge with large pits and ridges raised on a large white stem. Gucchi grows mostly in forest areas. It is also found in plains where there is an abundant amount of sand and also near water bodies.

The mushroom grows for a short season, beginning from ending February to starting April. People believe that the mushroom sprouts after lightning strikes the ground.

The price of Gucchi mushroom is between rupees 30,000 to 40,000 per kg. That is the reason morel mushrooms also come in smaller packs consisting of only a few grams of them.

“These distinctive fungi have a honeycomb appearance due to the network of ridges with pits composing their caps. Morels are commonly referred to as Gucchi in Indian market and are some of the most important fungi from economic, social and ethnoecological perspectives in the Northwest Himalayan range,” she said.

Morels are prized for their spongy, honeycomb texture and unique flavor are the most prized and popular mushrooms in most of Europe and North America. Morels are prized by gourmet cooks, particularly in Catalan and French cuisine.

She said they are replete with health benefits and are rich in potassium, vitamins and copper. They are also a rich source of vitamin D apart from several B-vitamins.

Dr Farahnaz said raw morels contain moderate levels of several B vitamins. “It is rich in antioxidants that prevent health issues including heart diseases and diabetes by removing reactive oxygen species that harm the body,” she said.

Gucchi mushrooms can’t be cultivated commercially and instead grow wild only in some regions like the Kangara Valley, J&K, Manali and other parts of Himachal Pradesh after the snowfall period.

“Due to difficulties in cultivation, commercial harvesting of wild morels has become a multimillion-dollar industry in the temperate Northern Hemisphere, in particular North America, Turkey, China, the Himalayas, India, and Pakistan where these highly prized fungi are found in abundance,” she said.

The ecology of Morchella species is not well understood. Morels are growing in a broad range of different habitats. The habitats seem to differ in their ecological stability.

“Thus, morels grow on one hand in massively disturbed or antropogenic habitats like burned forest sites or mulched gardens and on other hand in “relatively stable” ecosystems like sand dunes (near to Pinus forests), orchards, pioneer- or floodplain forests. Many species appear to form symbiotic or endophytic relationships with trees while others appear to act as saprotrophs,” she said.

Morchella galilaea, and occasionally Morchella rufobrunnea appear to fruit in the autumn or winter months rather than spring, which is the typical fruiting season for morels.

“Certain Morchella species exhibit a pyrophilic behaviour and may grow abundantly in forests which have been recently burned by a fire Moderate-intensity fires are reported to produce higher abundances of morels than low or high-intensity fires,” she said.

“This is caused by the soil becoming more alkaline as the result of wood ash combining with water and being absorbed into the soil which triggers the morels to fruit. Alkaline soil conditions which trigger fruiting have been observed and exploited with small-scale commercial cultivation of morels,” said Dr Farahnaz.

She said that small-scale commercial growers have had success growing morels by using partially shaded rows of mulched wood.

“The rows of mulch piles are inoculated with morel mushroom spores in a solution of water and molasses which are poured over the piles of mulch and then they are allowed to grow undisturbed for several weeks,” Dr Farahnaz said.

She explains that a solution of wood ashes mixed in water and diluted is subsequently poured over the rows of wood mulch which triggers fruiting of the morels.

“Morels are known to appear after fires and the alkalinity produced by wood ash mixed with water initiate fruit body formation for most species of morels,” she said.

Prof (Dr.) M. F. Baqual, Associate Dean at SKUAST-Ksaid mushrooms which are not really plants serve as one of the most important and cherished dishes which everyone likes to feed on.

“Although there are good number of mushroom, more than 14000 known species, of which only 3000 are edible and even if they are edible, one should doubly make oneself sure about the type of mushroom being fed on,” he said adding “this is because majority of the mushrooms are poisonous in nature and even allergic too.”

“Though, nutritionally, mushrooms are low in energy and fat but high in protein, carbohydrate and dietary fibre. They are possessing variety of minerals and trace elements such as potassium and copper and vitamins such as riboflavin, niacin, and folates. Mushrooms have been used as food for centuries because of their unique taste,” he said.

Baqual said besides its organoleptic, nutritional and medicinal value, mushrooms are considered a sustainable food product and particularly Gucchi which form royal dish and generally find place on the tables of elite class of society.

“This is purely because of it being expensive and reduced market availability.”

He said apart from being recognized as nutritious food, certain mushrooms are also an important source of biologically active compounds with potential additional medicinal value in Chinese medicine.

After remaining under soil for most of the year, Gucchi, found rarely, come out of the surface with the onset of spring. People believe that the mushroom sprouts after lightning strikes the ground.

Across many villages in Kashmir, people spend time in wild forests in search of these elusive delicacies. Finding Gucchi is exhausting as it is an arduous and requires hard work.

It has been seen that in villages young boys are excited in March month to venture out in groups to collect the rare mushroom. After collection, the mushrooms are washed. It takes months before enough can be collected dried and brought to the market.

In the villages, Gucchi mashroom are dried by keeping them hanging on top of balconies. Once dried these become small and light in size.

Given its market value people don’t miss any chance to take Gucchi mashroom home once found. So people here never cook them. They are only meant for selling given the luxury pricing.

“You know what happens, at times the Gucchi is in front of you but you wouldn’t find it,” said Mushtaq Ahmad, from Baramulla who goes to forests in March to collect the mushroom.

There are merchants associated with the trade of Gucchi mashroom. Once March ends they go to villages and peripheries to purchase the same. Thus the rare mushroom has an economic value as well.