Growing hundreds of flower varieties on a patch of land 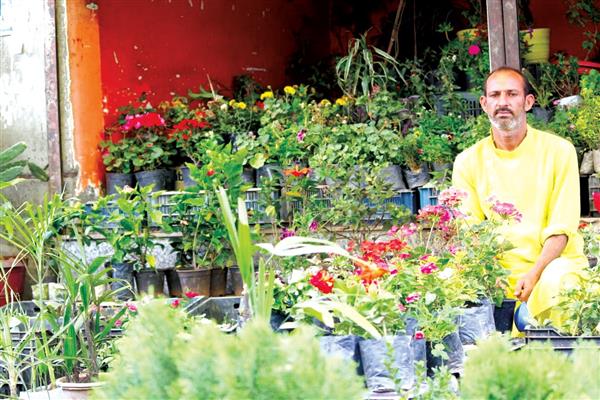 Flower growers of Kashmir believe that if you really wish to do something in your life, then there is nothing that can stop you from that. If people are determined to do something, it doesn't need any special training or higher education; all it needs is determination, hard work, and patience.

Abdul Majeed Bhat, has become a successful flower farmer.He grows hundreds of varieties of flowers on his 2 kanals of land. He said,“if a person believes in himself, opportunities are always looming over his head.”
The 34-year-old young farmer started growing flowers at the age of 12 when he was a kid, and now he has more than 100 flower nurseries in Nehru Park area of Srinagar. From his childhood, he was very fond of flowers.

At the age of 12, he spent some time with a family who were associated with flower growing, and later he decided to start his own flower nursery. He is currently selling flowers in Srinagar and also has a flower selling shop in North Kashmir's Handwara town.

The people in his locality had thought that he has gone mad when he decided to grow flowers on his land. Now he has become a role model for most farmers in the area as he earns a handsome amount.
“The majority of people from northern towns come here to buy flowers, and they were always requesting me to open a shop in the northern area so that they could buy flowers from there easily,” he said.

Upon their regular requests, he has taken some shops on rent in Handwara town, where people from this frontier district are buying the flowers at affordable prices.

He also tried to build a flower nursery in the Rajwar belt of Handwara town. However, it couldn't succeed due to cold weather. “At my first attempt, there was snow in the higher reaches of Kashmir, and the seeds that I sowed in the nursery got damaged,” he said.
The young farmer, however, said that as compared to previous years, the sales in flower selling have witnessed a huge decline. He stated that prior to the COVID-19, people were buying flowers in large quantities, which had decreased by 30-40%.

He said that earlier this year, he used to make around 5-10 parks in Kashmir but from some time, no park has been made because people have no money.

“When I started growing these flowers at the initial stage, I faced many difficulties, but I never looked back. I kept myself motivated that things would be better after some time, and today, by the grace of Almighty Allah, I am satisfied with this business. Although it is seasonal but I am satisfied with it,” he said.

In present times, he said, it is hard to believe that an uneducated person is providing a employment to many people, "It is Allah who is doing this all. I have just become the way.”

In the month of February, Bhat prepares for the opening of nurseries. The seeds are sown and then at the end of March, the process of selling flower plants takes place.

The farmers are also exchanging the variety of flowers among each other, which is helping them to earn more profit.

The success of commercial flower cultivation is largely determined by flower types. Many planting methods are available in modern technology, but plant cultivation in the greenhouse method is particularly popular and practical for flower plants. Flower plants can be grown in pots, on the terrace, inside, out in the open, in a greenhouse, or in a polyhouse.

Growing and distributing flower plants are known as floriculture, and these flowers are mostly grown in plant-growing buildings in temperate climes. Although numerous flowers are grown outside in nurseries or crop fields, it is primarily thought of as a greenhouse industry.

Cut flowers are an excellent revenue crop since they are simple to grow, produce quickly, and provide a consistent income throughout the growing season. In addition, most gardeners already have the necessary gardening tools and simply need to purchase seeds to get started. Cut flower cultivation is a profitable business in India, and it has grown from a backyard garden to a global industry in all nations where it is practiced.

Shakeel Ahmad Bhat, of Gund Kohroo village of Handwara is among the successful flower farmers of Kashmir who is growing around 200 species of flowers on 3kanals of land.

Shakeel started his flower business ten years back when he returned from Srinagar. According to Bhat, he went Srinagar 15 year back in search of labour, and there he met a gardener with whom he spent some three yearsin making private parks and also learned how to grow flowers.

Later he started growing flower on his own land in Gund Kohroo, and now he is making a good living from it. In addition he also giving work to other gardeners.

“In a single season we are selling flowers worth 15 lakhs from a single shop at Handwara and also earning a profit of more than 4 lakhs,” he said.

On being asked what else they are doing after the season is over, he said he is also into walnut and fruit business but his main focus always remain on flower business.“We are making private parks also which costs from ten thousands to sixty thousand,” Shakeel said.

Similarly, Mudasir Ahmad Dar of Handwara, who after completing his matriculation examination chose to go into flower farming at his home in Wuskura village of Handwara. He said he has been into flower business for many years and is satisfied with it.

He said, “People are always afraid that their business will fail, so they give up sooner. I too had the same apprehensions, but I didn’t give up. In this flower-growing business, there is always an apprehension that seeds may get damaged if the weather doesn't remain pleasant after a few days of seed sowing.”

He has been earning a handsome amount from his business, and feels delighted that he is not dependent on his parents.

"At present, I see people around me who have completed higher education are still unable to earn and are dependent on their parents for their expenses," Dar said with a smile.

He added, “There is no doubt I faced some problems at the beginning, and I couldn't earn what I had invested. But after spending some time on the flowers farming, I am not facing any issues now.”
According to experts, people who intend to start flower farming should begin by growing those flowers that best meet their monetary limits. Only shade and careful preparation would be required. They also recommend that they should undergo flower-growing training programme of the floriculture department. They say that flower farming has a bright future in the United States, and that more farmers should try their hand at it.