Grooving with their own tune 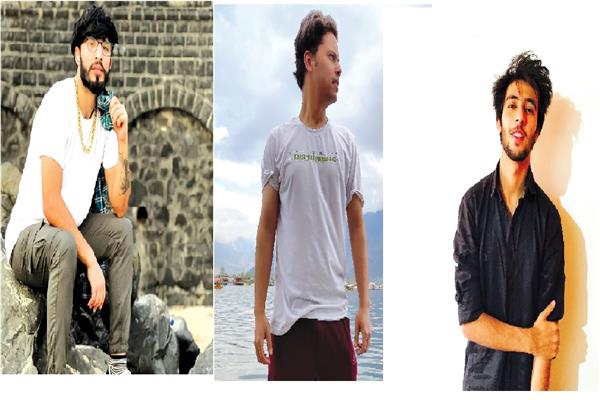 Passionate about dancing since childhood, Yasir Hameed left studying Bachelor’s of Science midway and flew all the way to Mumbai to pursue the career of his dreams and choice: modern dancing.

Hailing from Nowgam, Srinagar, Yasir’s parents wanted him to be a doctor but he had different plans for himself.

The then 17 years old didn’t know anything about the new place but started living with an intention to fulfill his dreams.

In Mumbai he joined the famous dancer, Terence Lewis’ Dance Academy and did a three months diploma. After completing the diploma, he appeared in the written and performance test and then he graduated in hip hop dance style.

Hip hop dance style is a form of street dance styles which is performed with hip hop music and has evolved as hip hop culture.

“From dancing in front of the mirror to dancing in front of Terence sir, I had struggled a lot but I never gave up. I had opted for the dancing field which people equated with madness and in Kashmir, it was even more difficult but my friend, Ramit helped and guided me in Mumbai,” he said.

Further, he worked as an assistant with famous dance choreographer, Melvin Louis which further led to improving his skills.

“I started earning while working as an assistant. I have done a lot of events in and outside Kashmir. I have participated in YouTube Tech Fest with Melvin Louis. I have also tried to get to the India’s reality show, India Got Talent but the competition is very high but I am aiming for it,” he said.

Currently, Hameed is pursuing graduation in Film and Television and simultaneously doing dance videos and collaborations.

Recently, he along with his team from Mumbai, have done a project in a picturesque part of Kashmir - Gulmarg. A song was titled Baar Baar Chahoon where he worked as an assistant director and choreographer.

Currently, he does urban dance, Bolly-swag and hip hop styles and the combination of all.

He said, “You have to start from Zero, not one. Kashmiris have a lot of knowledge and talent and no one can beat us in this but when it comes to presentation, we lag behind because we don’t get a platform in Kashmir.”

Having both of his parents as government employees, he said, “My brother is also preparing for UPSC. I am the first one in my family who chose a different path. Right now, I enjoy full support from my family. My mother has supported me very much.”

To promote dance, he has set up a dance academy, Beat busters. It had two branches- one in Srinagar and other in Jammu. Jammu academy is currently functioning.

“I would like to restart the academy in Srinagar in future. My main focus is Kashmir. If I will get a chance to represent Kashmir, definitely I will do,” he said.

Talking about his inspiration, he mentioned Melvin Louis, “he is awesome. The way he teaches dance is amazing,” he said.

Yasir feels artists’ community struggles in the valley due the mentality of some people. “Instead of criticizing, if people would appreciate us, it would make a way for other people. It’s not only about dance. It’s about all categories of art as well. Who knows a person who sings and dances, would offer prayers and maintain good connection with his lord. Mentality needs to be changed, and then everything is easy if you do hardwork,” he said.

Planning to restart an academy in Srinagar again, he said the people need to support and appreciate artists. “I along with my team will come and do a startup there. It’s not about money.  It’s about channelizing their energy into productive things as every dancer's dream is to outshine in some reality show,” he added.

Born in 2003 in one of the biggest slums of Delhi, Janta Colony, Tahir Qureshi used to live with his parents and two elder sisters in a single room with a broken ceiling.

“Until I became 7 years old our conditions were very bad, then my little sister came into this world and our situation got better,” he said.

In 6th standard, he got in a group of friends who indulged in anti social activities like theft and chain snatching.

When he was 13 years old, his family shifted to Kashmir where his father had a house.

“Outside people used to call me Kashmiri, Musalla. I have seen all religions from the same eye and even my parents have taught me to respect all religions.  I asked my parents this and they said that people’s mindset is bad. We are not wrong, they are wrong and when I came here, people called me Punjabi, Bihari so the place was only changed but the things were the same,” he said.

Gradually he came to know about his qualities of dancing, acting and writing but the fear of stage and society stopped him.

Initially he started making tiktok videos but was pained to receive a lot of hatred from people.

He said, “Like any other artists, I also got to see many mean comments from some people but my mother and my sister supported me a lot. Then I stopped making videos.”

In 12th, he joined a dance academy in Srinagar named Alive Academy where he learned many things about dance and acting.

“I was appreciated by my friends which boosted my confidence and I started posting my videos on social media again,” he said.

Due to family problems, he left the academy to work as a salesman in a toy shop. “I worked there for 6 months. It was difficult for me because I left something that I loved to do. My seniors would pass mean comments but one day the shop owner told me that he has seen my videos. He appreciated my talent and blessed me. Then they stopped teasing me,” he said.

Tahir couldn’t keep himself away from the dance and decided to leave the job and joined the academy back.

He said, “I have participated in a lot of events in SKICC, Tagore Hall, Gulmarg and Zabarwan.  I have also done projects with famous content creators like Hasnain Khan.”

Tahir believes that his struggle to make a name in the field has just started.  “Every artist sets his goal where he wants himself to see and after achieving those dreams, he yearns for more so the struggle will never end and I will do my best and will make myself proud,” he said.

He further said that Kashmir has immense talent and with hardwork artistsare trying to make their name.

“I try to improve myself every day. I do a lot of hard work and I believe that one day not only mine but everyone around me will achieve what they want to. Like me, every artist wants to inspire the world and my best is yet to come,” he said.

“I used to do the dance forms that I would watch. Delhi gave me an opportunity to learn the actual dance and my perspective about dance changed when I was introduced to the culture of hip hop,” he said.

He said that in Kashmir, the dance is still alien to many people and there are very few resources to learn it. “An artist has to be aware of his art. For this, one has to grind, exchange thoughts with people, and do cyphers and battles,” he said.

Starting with the cutting shapes form of dance, he got inspired by the Hip Hop culture, and learnt about hip hop form of dance.

He said, “When I came here, I performed in the college audition. I did lyrical Bollywood form. I performed in front of my seniors who were in the dance society. I used to do a cutting form of dance those days. They were impressed by that. When I saw the battles, I was like this is where I want to be. Gradually I changed my styles to hip hop and got immense support from my team.”

Further, if he sees anything interesting, he tries to incorporate that into his dance.

“It’s about passion and I use this art to express myself. To be honest, it was more of a hobby and then gradually when you face life struggles and when something happens to me, I would dance and feel good,” he said.

For him, views and likes on his Instagram post doesn’t matter but what matters is the appreciation from people who know the art.

Talking about his family support he said, “If I talk about passion, my family is okay but when it comes to taking it as a career then they are skeptical about it.”

He said that dance teachers in Delhi do workshops all over India but not in Kashmir. “People in Kashmir are yet not aware about the art and when art culture will develop, scenes will evolve.”

Saneeb feels that the dance scene is gaining momentum among youth and he plans to start a dance session in Kashmir. “When I will be back in Kashmir, I will do dance sessions with my friends and whoever wants to come. More people will get inspired and it will get evolved more and platforms will also be created,” he said.