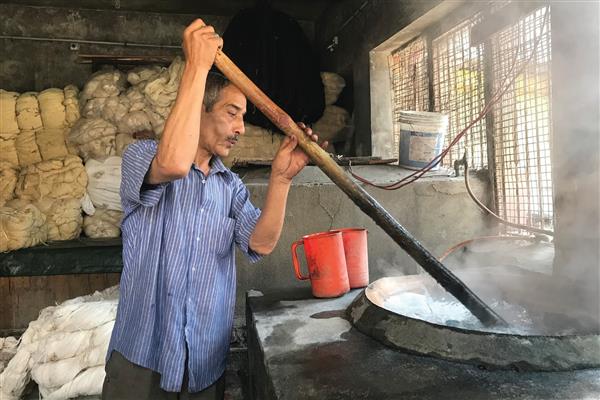 Amid the buzz of Bohri Kadal in downtown area of Srinagar, a trail of colorful bunch of threads ushers you to the dyeing unit of Bashir Ahmad Rangrez.

The 122 years old unit has been known to bring the colorless threads to life. Bashir has been associated with the art of dyeing for 40 years. Without wearing gloves and mask he gets started with the process of dyeing.

“The dyeing industry is one of the important industries associated with the Kashmiri handicrafts. The colorful threads are used for embroidery in shawls and other handicrafts products. The work demands arduous labor and dedication,” Bashir said.

A steamy atmosphere pervades inside the grey walled chamber where various jars of dyes are lined up on the shelves.

Bashir puts a considerable amount of dye in the big tumbler of boiling water. With the wooden pole, he moved the bunch of threads inside the boiling water so that it absorbs the dye properly. The dyeing involves the use of acids too to let the thread hold the dye. Once the thread gets dyed, it is put in the clean water to remove the excess dye and the acid from it.  It is put on a wooden plank till the water is strained. Lastly it’s put out for drying.

The raw material- thread and dyes are imported from various parts of the country. Thread is brought from Rajasthan, Badhori, Bikaneer and other states.

Today chemical dyes have replaced the natural vegetable dyes. In older times, ancestors used to travel to villages to get herbs. Those herbs were boiled in water by the women folk of the house. Bashir said that the vegetable dyes apart from being eco-friendly were good for the hands as well. Also it would not affect the quality of the fabric or thread which was dyed with it.

“Veere moul, Doun gular, Doun Kange were some of the herbs used to make dyes. Having the natural qualities, the dyes had no side-effects. The dyes that are available today contain chemicals and acids which cause damage to the lungs,” he added.

The manual dyeing was replaced by machines some year back but the machines couldn’t prove to be a good alternative due to less capacity.  “The machines can’t hold 100-200 kilograms of thread in a single time. The machines work well in other parts of India but not here,” he added.

He jokingly said that the prolonged exposure to the steam of dyes and acids have made his immune system strong. “Even though most of the dyers have frail structures, dyers are immune to Covid and asthma,” he laughed.

He has been playing with the colors all his life and now its downfall is something that pains him.

“One has to take debts in the business because the income is very low. Earlier it was good to be in this business but due to various setbacks, many people wound up their units. Now it’s confined to a few families only,” he said.

He said that earlier huge amounts of thread used to hit the international market but since Covid pandemic started, the threads are used to make products catering to the local markets only. He also fears that owing to such loss, he may have to shut his unit soon and none of his two sons will continue the legacy.

“Government doesn’t pay attention to Kashmir arts. As a result, the future generation is not willing to take it up. The one who prepares the yarn gets a good earning whereas dyers don’t get to earn more,” he said.

Reminiscing about the past time, he said that earlier he used to dye 100kgs of yarn in a day but owing to the less demand, only 5kgs are being dyed presently. The manpower of his dyeing unit has also gone down from 4-5 laborers to only him who is managing the unit.

“My uncles are also into the business and they have the same condition too. The raw material has become expensive. The rates of the raw material increase every single day. With the misuse of the acid, getting acid has also become full of hassle,” he said.

Despite facing all the problems, his hopes are still clinging to the last threads. “If I leave, I would feel bad. I want this unit to function even after me,” he said.

When the younger generation is not ready to take up the tiring job, 23 years old Moosa Rangrez looks after the dyeing unit of his father, Abdul Majid. In order to carry forward the legacy of his forefathers, Moosa had to leave the studies after pursuing graduation.

Moosa, the fourth generation of the Rangrez family has to take over due to the illness of his father.

In this dyeing unit, rolls of fabric are being dyed which later on are ironed and cut into pieces to make shawls, suits, pherans etc. The work in the unit is going on in full force as the handicraft products have to be readied till September when various tradesmen will be preparing to leave for Delhi, Chandigarh and other parts of the country.

One roll of raw material after getting dyed is cut into 6 pieces which afterwards is being tailored are embroidered with the threads by artisans.

“The work starts early as the water is considered clean in morning hours so light colors are used first. Then as the day progresses, the water gets unclean and dark colors are used during late hours,” he said.

The dyes are imported from Amritsar. Different colors are used for different fabrics. Here, the water is boiled traditionally by burning the log of wood. In some dyeing units, due to the high price of wood, boilers or gas cylinders are used to heat the water.

Despite the work of dyeing continues for the whole year, Moosa thinks the people associated with the dyeing industry are getting less day by day. “The new generation will not be able to take it as it is a backbreaking job. If machines or new techniques are introduced, then it can survive,” he said.

Moosa’s plan is to give his full time and efforts to his father’s unit. “My brother didn’t choose to do this but I want to carry forward the legacy. There is a lot of unemployment in the market. Instead of searching for a job, I will take care of what our ancestors have given us,” he said.

While giving the historical perspective, noted Kashmiri poet and historian, Zareef Ahmed Zareef said thatin 14th century, with the beginning of Islam in the valley, Zain-ul-Abideen got artists from various parts of Central Asia’s Iran, Samarkand, and Tashkent, who not only introduced various crafts but also refined the skills of various artists of valley.

“The craftsmen who used to dye fabrics and threads were known as Rangrez. The Rangrez taught this art to the dyers of the valley. Earlier, natural dyes like flowers, herbs and the crust of some fruits like pomegranatewere used. The dyes used to be free of pollution and ailments,” he said.

After the trade with Central Asia was stopped, dyes were imported from other parts of India into the valley.

Zareef said, “The old city is famous for the skilled artisans and craftsmen. The art of dyeing was practiced in areas like Khoj Bazar, Malaratta, Khanyar, Safakadal, Hawal and Gogwara but the biggest firm was in Khanyar, that’s why the area was named as Rangar stop, Khanyar.”

He further said that the dyers were categorized into groups as per the fabric they used to dye. “One group used to dye Pashmina and Shahtoosh and the other used to dye cotton and Rafal fabrics,” he said.

He further added, “We should pay attention to our tradition and try to preserve it.”