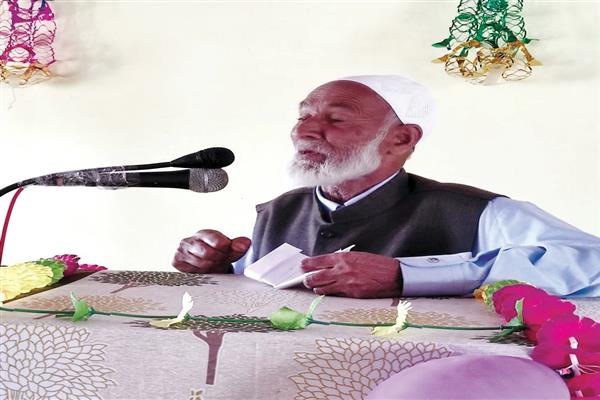 Ghulam Qadir Shad’s room often bustles with children and young poets who come time and again to seek help from him. Even after his retirement from the service of a headmaster, he pays equal attention to his pupils and offers them guidance wherever they need.

Hailing from Dardpora village in district Baramulla, he was appointed as a teacher soon after passing his matriculation examinations. Having worked as a teacher for 32 years, he served as a headmaster as well and retired in 2006.

During and after the time of his service, he has been actively participating in the events for promoting Kashmiri language among masses.

Though he got the job very early in his life, that did not stop him from pursuing his studies further. He pursued Bachelors in Arts, Bachelors in Education and further did an honors course in Kashmiri language.

His connection with poetry started in 1962 when he was in 8th standard. Always being good in studies, he never compromised his interests in poetry but contributed actively in the field of literature as well.

For developing poetic temper in himself, he gave major credit to one of his teachers, Manzoor Hashmi who was a poet and a writer. He recalled that in school, his teacher used to organize many poetic gatherings and used to invite the students too.

He said, “I used to write those days and he used to correct my writings. In poetic symposiums, he used to give names of famous writers and poets to students and would ask them to prepare the verses of the poets they were named. In one symposium, I was told to be FurqatKakori. I was made to wear a cap and a spectacle and he introduced me to the audience as FurqatKakori to read the poems of the poet. This is how I was introduced to poetry.”

“He became the president and the students he had trained for years became the basic members. Since then, the Kruhem Cultural Forum is still going on. A yearly book- Anhar is also published where many of my write ups find space,” he added.

As a headmaster in a High School ChokibalPanchgam, he came across people who lack knowledge about Kashmiri language. He went to schools and conducted many gatherings where he trained and guided students and budding poets.

“I still receive many of their write ups online. I correct their writings and send it back to them. There are many kids who are interested in poetry and have been prepared by me. I see many youth coming forward to learn how to write Kashmiri,” he said.

He said that a poet should have inherited quality or a skill for poetry. “A poet gets poetry while he is in sleep or is working. It’s not something you learn to do but it comes to you naturally,” he said.

Being versatile in speaking a number of languages, he speaks Kashmiri, English, Urdu, Punjabi, Persian and Gojri but prefers to write in Kashmiri language only. “We don’t have to forget our rich language. No matter how many foreign languages we learn, one should stay connected with the roots. My motive has always been promoting our language,” he said.

Ghulam Qadir Shad writes under the pen name Shad Dardpori. He has contributed much to the field of Kashmiri literature which includes humorous poems, dramas and Marsiya (Marsiya is a poem written to commemorate the martyrdom of Ahl al-Bayt, Imam Hussain and Battle of Karbala).

While working as a broadcaster in DD Kashir and All India Radio, he has worked with producers like Somnath Sadhu, Pushkar Baan and Nasir Mansoor. Also, he has written and presented Ladisha on the broadcasting channels which were later on published by another author in his book.

Many of his dramas have been presented by the artists and school students on stage during various occasions. “The events have marked the presence of reputed officials and personalities. The education department used to depute me to other schools to teach dramas to students,” he said.

Being a son of a barber, he got a good education and said that he has also given good education to his children. One of the sons is looking forward to compiling and publishing his write ups.

He possesses a good memory and says that despite having a frail appearance, he has never been on medication.  “I have never been depressed and I think I have a responsibility of guiding and teaching the people more about Kashmiri - be it poets or school students. For me, there is a lot more to do in my life,” he said.

He has been presented with many awards of honors by various cultural forms and he also won the award for his broadcasting skills from Radio Kashmir Srinagar.

In the field of education, he has received the best teacher’s award at district level. In 1996, he was also selected for the state award of best teacher but due to the unfavorable conditions in the valley, he couldn’t reach Jammu and missed the award. “The award is yet to be received by me. It’s not about the money, it’s about the appreciation that I want to receive. Many government officials had pushed my case but it’s yet to be restored,” he said.

Talking about his village Dard Pora, he said that the Muslim and Sikh community live together in unison. “The village had a good literacy rate and had many educated people. It is believed that one of the Maharajas built one of the firsts primary schools in 1916 here. So, over the time Muslims and Sikhs have prospered together,” he said.

He further said that the teacher back then used to get a lot of respect from the society because he had an important role to play in shaping the future of the people.

He said, “My mother used to tell me that in the primary school here, one of the teachers was from Srinagar. People of the village used to offer him service and treat him like a family. The tradition of respecting a teacher is still in our village.”

While praising teachers he said, “The great personalities of the world like Guru Nanak and Shivaji Maratha have always bowed their heads before great teachers. The first teacher is the lord himself.”