From overweight teen to ‘marathon girl of Kashmir’ 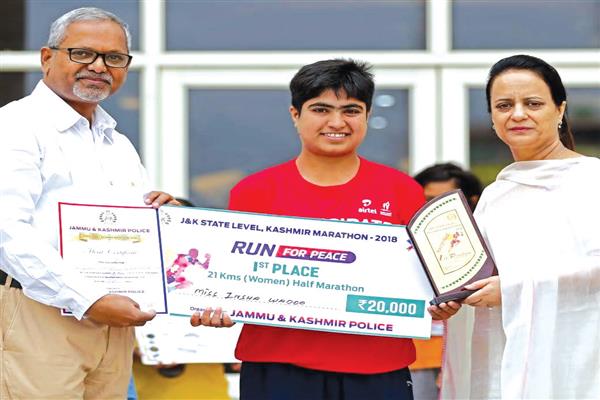 Motivation of a mother of an overweight daughter turns her into the epithet of ‘Marathon girl of Kashmir’.

It was then that she developed a passion towards running and cycling, eventually getting famous among locals as a ‘marathon girl of Kashmir’ even some call her ‘PT Usha of Kashmir’.

Hailing from Hassibhat area of Rainawari in Srinagar, Insha did her B. Sc in Home Sciences from Government Women’s College M.A. Road and pursued her BP Ed from Physical Education College Ganderbal.

Later she did a one-year training course in professional running from ‘The Run Club foundation’ TRC, Chandigarh. After that, she worked as a physical education teacher at GD Goenka School, in Srinagar.

She is currently delivering her service in the Department of Youth Services and Sports as a physical education teacher under the Rehbar-e-Khel scheme.

“In October 2019 I got appointed as a physical education teacher for Rs. 3000 per month under Rehber-e-Khel in the youth services and sports department and have been posted at GMS Saida Kadal,” she says.

Third youngest among siblings, daughter of a cab driver, Insha decides to fulfill the wish of her mother and joins a local sports club (Fought city club), since then she has not looked back.

“Being obese, weighing 82 Kg, my mother insisted me to go out for regular walk, after her persistent insisting I went to Badamwari, an almond garden at Rainawari and started regular walk," she says.

She was encouraged by the professional athletes from different clubs who would practice there.

After constant training for three months, resulting in burning some calories, she was convinced by the various athletes to participate in the marathon which was taking place at Pulwama in 2009.

She participates in a 10 km marathon where she finishes at the 14th spot, after which she got through a lot of criticism for failing in the race.

“I was even told to stay at home, not to come again, you cannot run, but Kursheed Ahmad Bhat, a professional athlete who was part of the same club Bhat, gave me courage and took responsibility for training me,” she says.

Since then, Bhat has been her role model, who always would support her at times and would help her financially.

“Kursheed Sir did buy tracksuits and pair of shoes for me knowing that I could not afford that,” she said.

While practicing she would train with male athletes which helped her to compete with female athletes. “To strengthen my physical endurance, I would practice with men,” she said.

She won her first race in 2010 covering the five-kilometer distance where she stood first. The race was organized by local sports clubs from Khir Bhawani to Ganderbal.

“In that mini marathon, I was awarded with cash of Rs 5,000, juicer mixer and grinder, trophy and certificate. Since then, I have not looked back, and I would continue my marathon journey for the rest of my life,” she says and added that the people who criticized and discouraged me initially, would now appreciate and compliment me.

·         In 2013, she won the Srinagar marathon for the third time in a row. She won the annual college road race besides winning college's best athlete of the year second time.

·         In 2014, she won the annual road race and cycle race third time in a row, and won best athlete of the year third time. She also won the inter college road and cycle race.

·         In 2015, she won Kashmir Cyclothon “Pedal for Kashmir”, she bagged third place in “First International Marathon” of which first two positions were grabbed by Kenyan athletes, and it is after this Insha was called PT Usha of Kashmir.

·         In 2016, she participated in an Ultra run alongside Australian ultra-marathoner Pat Farmer from Banihal to Nishat Garden on the banks of Dal Lake, covering 110 kilometers which is her memorable achievement. “Farmer had come running from Kanyakumari and we went to welcome him at Banihal before running up to Nishat Garden. I was the only woman among six athletes who ran alongside him,” she says.

·         In 2017, she got a training offer from The Run Club foundation in Chandigarh by Paveela Prasser Bali. “She had read about me and offered to hone my talent. I got one year of training during which I competed at the national level,” she says, adding that in Delhi, I ran three half-marathons, winning the 13th, 8th and 14th places.

·         In 2020, she got first place in the 50-km Pahalgam cyclothon and secured the second spot in the 75-km cycling expedition from Baramulla to Kaman Post on the Line of Control (LoC) in Uri in 2021. She also secured third place in the recently held peace marathon organized by JKP in the open category.

At 26, Insha, now a professional Marathoner weighs 49 Kg and has come a long way ahead in life. She trains school students in athletics, cycling, volleyball, kho-kho and other sports.

Despite these achievements Insha religiously follows a tough practice weekly schedule, besides looking after her family affairs soon after her mother got paralyzed by a sudden stroke which left her bed ridden for the past three years.

She has divided her training schedule on weekly basis, on Tuesday she would cover distance of 7km, on Wednesday would do strength and endurance training in Gym, on Thursday would do uphill – downhill training (upstairs-downstairs) particularly at two specific places Makhdoom Sahib Shrine and Shankar Achariya.

On Friday she runs 4 kms, on Saturday 7 kms with light exercise and on Sunday she runs 24 kms.