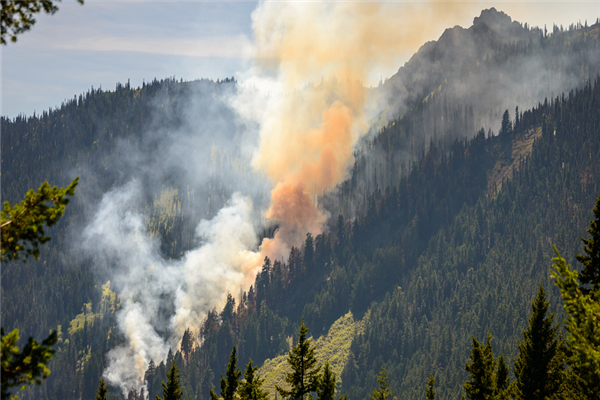 The most common hazard in forests is fire. Forests fires are as old as the forests themselves.Forest fire pose a threat to the entire regime of fauna and flora seriously disturbing the bio-diversity, ecology and environment of a region. During summer, the forests become littered with dry senescent leaves and twigs, which could burst into flames ignited by the slightest spark. As per Forest Survey of India, about 50% of the forest area is fire prone. Very heavy and frequent forest fire damages are noticed over 0.87%, 0.14% and 5.16% of forest areas. Forest fire causes imbalances in nature and endangers biodiversity by reducing faunal and floral wealth. Traditional methods of fire prevention are not proving effective and it is now essential to raise public awareness on the matter, particularly among those people who live close to or in forested areas. In UT of Jammu and Kashmir, forests too in both regions are vulnerable to fires especially during hot Summers in Tropical and sub-tropical parts of Jammu region and during long dry spell n Autumn in Kashmir region especially coniferous forests which are more susceptible due to high resin content.

Causes of forest fires can be divided into two broad categories: Environmental (which are beyond control) and human related (which are controllable).

Environmental: Many forest fires start from natural causes such as lightning which set trees on fire. However, rain extinguishes such fires without causing much damage.  High atmospheric temperatures and dryness (low humidity) offer favorable circumstance for a fire to start. Environmental causes are largely related to climatic conditions such as temperature, wind speed and direction, level of moisture in soil and atmosphere and duration of dry spells.  Other natural causes are the friction of bamboos swaying due to high wind velocity and rolling stones that result in sparks setting off fires in highly inflammable leaf litter on the forest floor.

Human Related: Fire is caused when a source of fire like naked flame, cigarette, electric spark or any source of ignition comes into contact with inflammable material.Human related causes result from human activities. These can be intentional or unintentional, for example graziers and gatherers of various forest products starting small fires to obtain good grazing grass as well as to facilitate gathering of minor forest produce. The centuries old practice of shifting cultivation (especially in the North-Eastern region of India and inparts of the States of Orissa and Andhra Pradesh), the use of fires by villagers to ward off wild animals, fires lit intentionally by people living around forests for cooking, warmth and recreation purposes are main cause of forest fires.

The causes of forest fire have been increasing rapidly. The problem has been accentuated by the growing human and cattle population. People enter forests ever more frequently to graze cattle, collect fuelwood, timber and other minorforest produce. It has been estimated that more than 90% of forest fires in India are man-made.

On the basis of the place of their action

Creeping Fire:  Creeping fire is a type of forest fire spreading slowly over the ground with low flame. It occurs in forests with no ground cover/undergrowth usually ground covered with a layer of dry leaves.

Ground Fire: Ground fire is a type of forest fire that burns the ground cover only, i.e., the carpet of herbaceousplants and low shrubs, which covers the soil. It occurs in deodar forests as slash disposal.

Surface fire: -A forest fire which burns not merely the ground cover but also undergrowth is called Surface fire. Most of the fires in plains are surface fire.

Crown Fire: The other type of forest fire is a crown fire in which the crown of trees and shrubs burn, often sustained by a surface fire. A crown fire is particularly very dangerous in a coniferous forest because resinous material in such trees is highly inflammable in nature. On hill slopes, if the fire starts downhill, it spreads up fast as heated air adjacent to a slopetends to flow up the slope spreading flames along with it. If the fire starts uphill, there is less likelihood of it spreading downwards.

Forest Fires result in loss of valuable timber resources, degradation of catchment areas , loss of biodiversity and extinction of plants and animals , loss of wildlife habitat and depletion of wildlife, loss of natural regeneration and reduction in forest cover , global warming , loss of carbon sink resource and increase in percentage of CO2 in atmosphere , change in the microclimate of the area with unhealthy living conditions, soil erosion affecting productivity of soils and production , ozone layer depletion, health problems leading to diseases , loss of livelihood for tribal people and the rural poor as approximately 300 million people are directly dependent upon collection of non-timber forest products from forest areas for their livelihood.

The incidence of forest fires in the country is on the increase and more area is affectedevery year.The technical resources required for sustaining a systematic forest fire management programme are badly needed. Important forest fire management elements like strategic fire centers, coordination among Ministries, funding, human resource development, fire research, fire management, and extension programmes are need of the hour.

Taking into consideration the serious nature of the problem, it is necessary to make some major improvements in the forest fire management strategy.

There is need of a well-coordinated and integrated fire-management programme that includes the following components:

(3) Establishment of Watch towers to detect fire in remote areas so that staff is alerted well in time.

(5) Awareness among nomadic people not to carry fire causing substances inside forests and ensuring that fire lit for coking, driving away wild animals etc is extinguished completely.

(6) Creation of fire lines inside forests to check spread of fire.

(7) Use of modern fire extinguishing tools by staff to control forest fire in inaccessible areas where carrying water is very difficult.

(11) Prompt detection of fires through a well-coordinated network of observation points, efficient ground patrolling, and communication networks. Remote sensing technology is to be given due importance in fire detection. For successful fire management and administration, a National Fire Danger Rating System (NFDRS) and Fire Forecasting System are to be developed

(12) Special emphasis is to be given to research, training, and development.

·         Goodwill of the local people through their logistic support to field staff in timely reporting about fire incidents and helping staff in extinguishing the same.

·         Action against dereliction of duty against staff as well as reward for continuous work in preventing fires.

·         Putting of notices prohibiting kindling, keeping and carrying of fire in forest areas in fire season. Lodging of FIR against culprits found guilty of deliberately putting forests on fire and strict action same as per provisions of Indian Forest Act 1927 etc.

·         Awareness among people regarding Do’s and Do Not,s inside forests to prevent forest fires

·         Construction of fire watch towers for detecting fires from distant areas as well as for vigilance.

·         Creation of fire lines in forests to minimize damage and spread of fires.

·         Establishment of Fire Control Rooms for quick deployment of staff to site of fire incidence.

“Trees are poems that the earth writes upon the sky. When we fell them down and turn them into paper then we may record our emptiness”….Khalil Jibran