For artist Sahil Santoor, Music has no boundaries 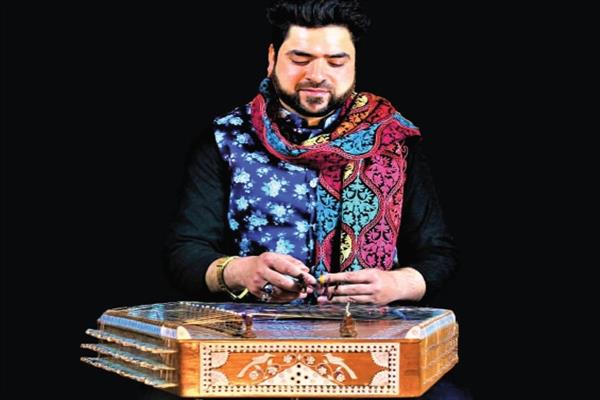 A young artist Noor Mohammad popularly known as ‘Sahil Santoor’ believes music has no boundaries and can reach out to any part of the globe through social media.

Hailing from Wathoora village of central Kashmir’s Budgam district, he was inclined towards music since his childhood and despite many hurdles he followed his passion.

During his childhood, two friends of Sahil were learning music from Master Mohammad Ismayil Bhat, who was a well-known Sufiana maestro.  Sahil too joined music classes with them and got an inclination toward music.

“I began my journey with Tabla, then played Saaz-e-Kashmir for sometime and finally i played bean Santoor, which become part of my life.

Sahil says he faced many challenges to reach this level and his journey was definitely not a cakewalk.

In 2008, Sahil got a scholarship from Jammu Academy and also go chance to play Santoorin musical events. In 2013, he earned another prestigious scholarship in acting from Centre for Cultural Resource Training (CCRT) New Delhi.

After developing an interest in this art, Sahil did his master's degree from the Music and Fine Arts Department, University of Kashmir.

“I remember my teacher and Master Adil Tibat Baqal at KU;he taught me about Santoor and gave classes about Indian classical which were interesting and need of the hour,” he said adding “I have played Santoor in almost all states of India. Over the past several years, i have also received awards and appreciation from all the quarters.”

He says, when Music and Fine Arts department was temporary working at Rajbagh, two managers from The Lalit Grand Palace hotel came in search for a musician as the people visiting the hotel from outside Kashmir were appreciating the ‘Santoor music and its unique toning.

“They selected me and after that many offers came from other big hotels and then I started performing at several places,” he said.

Sahil can play any Kashmiri folk or Bollywood song on his ‘Santoor and can perform his skills in front of a large audience.

About the introduction of Santoor in marriage functions, he says people love to listen to the smooth tunes of Santoor. I introduced this concept two years ago in marriages and nobody is now resisting it and people of any group are enjoying its soulful tunes, he said.

“I am getting positive responses from people. Both upcoming months September, and October are already booked for marriage functions,” Sahil said.

He says apart from Kashmir, he has also performed in marriage functions in Mumbai, Banglore, Hyderabad, New Delhi, and other cities in India.

Presently, Sahil is performing his Santoor at The Lalit Grand Palace in Srinagar and other prominent hotels. Besides he is also performing in live concerts.