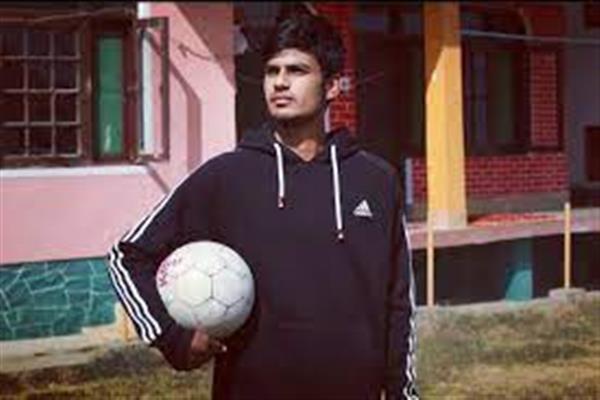 Due to the unrest caused by the killing of militant commander Burhan Wani in July, 2016, Huzaib Shah, a 13 year old boy, spent most of the summer that year at his home. Being the only son in his family, he was not even allowed to leave his home.

To entertain himself, the youngster started playing football in his lawn all alone. Since the game requires a team to play so Shah found a strange way to amuse himself by trying to learn football tricks.

“I loved playing cricket. I used to spent hours playing cricket but the unrest of 2016 forced me to stay at home. I had nobody at home whom I could play with. I started playing football and found a better escape,” said Huzaib, who comes from central Kashmir’s Budgam district.

Huzaib kept playing the traditional form of football until he stumbled over some football trick-shot videos on YouTube.

“I was amazed with what one of the guys did. I felt captivated with his gravity defying tricks. I tried to emulate some of the tricks in my lawn. I felt in love with what he did. I wanted to do the same,” Huzaib said.

“I started practicing tricks for hours in the morning and evening before I slowly started getting better at it,” Huzaib added.

Huzaib propelled to fame once he started uploading his trick-shot videos on his social media accounts. Performing impossible feats of dexterity, Huzaib dazzled the viewers with his ability to juggle and control football, balancing it impressively with great expertise. His hard work gained recognition from local and national media in no time.

With thousands of followers on his various social media accounts Huzaib performs scores of trick-shots using balls of all sizes.

He could be seen shooting football into the bin or knocking things down from someone’s head in true “William tell-ish style” or move a ball through a moving tyre.

One of his trick-shot videos ‘People Are Awesome’ fetched around five million views. In the video Huzaib is seen kicking a tennis ball through two moving tape rolls.

Huzaib hopes that he can inspire others to take up the sport professionally. He never had a coach himself and he hopes to teach his techniques to as many people so that he can help popularize trick-shots art in the valley.

The trickster hopes that the sport gets recognition at a global so that more people take it up as a profession.

“Recognizing street sports like trick-shots is definitely a great way to make it more inclusive. It will allow youth to take their passion for the sport to the next level by giving it a proper platform and will make it more visible,” Huzaib added.

He does not let his passion for trick shots affect his academics at all. After scoring distinction in 10th standard, Huzaib opted science for higher studies. Currently a 12th standard student, the trickster wants to continue his education so that he can combine his love for ‘science and art’ of trick-shots.