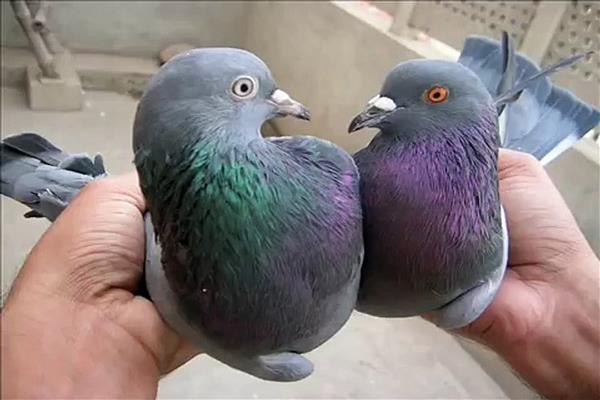 Mohammad Abbas Sofi, 45, a well-known pigeon fancier from Moti Mohalla area of Dalgate in Srinagar says he has been rearing pigeons for the past three decades. He says and it is his passion and helps him to relieve stress and worry.

"We are flying hopes; it gives me a unique feeling. Our family has a long history of keeping pigeons and when I grew up, I also started rearing them," he said.

Presently Sofi is having 60-80 pigeons of various breeds. Throughout the year, he sells and purchases new ones following his passion for pigeon keeping.

Sofi is a businessman by profession and spends most of his free time with the pigeons. He feeds them thrice a day and says for him it is a kind of addiction. “During mating season, there is a need for more care as compared to normal days,” he said.

For the past several years, valley-based bird lovers have started rearing pigeons again. “There are various pigeon breeds including Musier, Khatri, Check, Lal Anch, and Matakali pigeons which are most lovable due to their long tails but they cannot fly so high," Sofi said.

The 45 year old says Lal Anch (pigeon with red eyes) is most popular these days and is loved by passionate youth. Now foreign pigeons are also being sold in Kashmir including sun season pigeons, Turkey, and Pakistani pigeons, he said.

He said there is another type of bird called tippler pigeon. It is a category of domestic pigeon breeds and is mostly developed to participate in competitions. They are well trained, intelligent, and known for their strength, he said.

"Local Kashmiri pigeons are mostly reared in villages as they require less attention and can survive on their own without much care. It includes red, tajdar pigeons," he said.

About the rates of pigeons, Sofi said it depends on the choice of the owner. “Normally a pair of pigeon costs around Rs 2000-3000, while sometimes it can go beyond that, there are people who purchase a pair for 10000-15000 rupees in Srinagar,” he added.

There is more enthusiasm among the younger generation about pigeon fancying. In Srinagar, there are famous points where pigeons are sold, purchased, and exchanged including Malkhah, Chattabal, Sadakada, Ranger stop, and other areas in the city.

At the commercial hub of Lal Chowk, people can be seen often feeding the pigeons near the iconic clock tower. While at Kashmir's famous shrines pigeons can be spotted everywhere and devotees love to feed them.

Abdul Hameed Bakshi, a pigeon fancier from Yadipora Hyderbeigh in north Kashmir's Baramulla, is in the pigeon business for the past 12 years. He said he left his education midway because of his passion for pigeon keeping.

"Over the years, there has been a massive decline in pigeon keeping in villages, but now it has started gaining momentum. I purchase and sold pigeons throughout Kashmir. From Uri to Qazigund, there is demand particularly from people living in cities and towns about pigeons," he said.

Bakshi says in Kashmiri villages, there are popular pigeon breeds including, Tajal Mozal, Masakali and foreign ones. “They can be purchased at the cost of 20000-30000 rupees each pair and sometimes beyond that," he said.

"Pigeon keeping is nothing but love for them as it requires passion. My morning starts with calling these pigeons and ends with feeding them properly. It gives me a unique feeling when a pigeon becomes happy," he said.

Bakshi says high flying pigeons are part of Kashmir traditional society and  their history dates back to Mughal era when Akber introduced it in Valley.

"The key to good health is prevention. Same applies to pigeon keeping. Sick racing pigeons can’t produce healthy offspring and sick pigeons in a loft put other lofts at risk of contamination," he said.

"We have to also take care of their health. Usually, we vaccinate them several times in a year and take care of extra hygiene measures,” he added.

About trained pigeons to convey or send messages, he said with the advent of new faster and reliable technologies there is little to no scope in it now.

Another pigeon lover, Mudasir Yousuf, from Kokernag area of Anantnag equates pigeons as a symbol of love and peace. They are birds of sacrifice, dream, kindness, and understanding, he said.

"After completing my graduation, I opened a garment shop. I take time to take care and feed my pigeons. They are just like my own family," he said.

“My family asks me to get rid of them, but I am too fond of them. It is my passion; I am planning to make a permanent space on our rooftop for them,” he said.

Yousuf said unlike in other parts of the globe where races and other competitions are held, here people have limited pigeon keeping to passion only.

"There are many pigeons people love to rear including roller pigeons’ who are known for their bold and aggressive looks. While fantail pigeon has the fan-shaped tail appearance and silky feather textures," he said.

Yousuf said homing pigeons are known for their ability to return to their nests. They are also known for their flying skills despite the long distances and are used in competitions. They were also called messenger pigeons during the early times, he said.

Faizan Ahmad Shah, a pigeon keeper from Magarmal bagh said initially his family opposed his passion. "But I motivated them. I have made a coop for the pigeon that is further divided into several parts: a cage and a breeding room,” he said.

“They make me happy. There are many people in our society who indulge in substance abuse and cigarette smoking. Pigeon keeping is a thousand times better than it and helps in relieving stress and keeps one engaged,” he said.

Shah said since his childhood, he was inclined towards pigeons. There are different types of pigeons that are classified on the basis of their texture, kinds of beaks, nails, and eye colour.

" I love to keep Moesur(dotted), Chot (full white), Zug (black), Zawdogh(white and black), and Kal-Wozul in local parlance," he said.

Shah said over the past several decades, in Srinagar, there are hundreds of people who have a keen interest in pigeon rearing. It is increasing each passing day and during the  Covid-19 lockdown, there was a surge in local demand,” Shah added.

“There are various pigeon breeds including Musier, Khatri, Check, Lal Anch, and Matakali pigeons which are most lovable due to their long tails.”

“Pigeon keeping is nothing but love for them as it requires passion. My morning starts with calling these pigeons and ends with feeding them properly. It gives me a unique feeling when a pigeon becomes happy.”

“My family asks me to get rid of them, but I am too fond of them. It is my passion; I am planning to make a permanent space on our rooftop for them.”