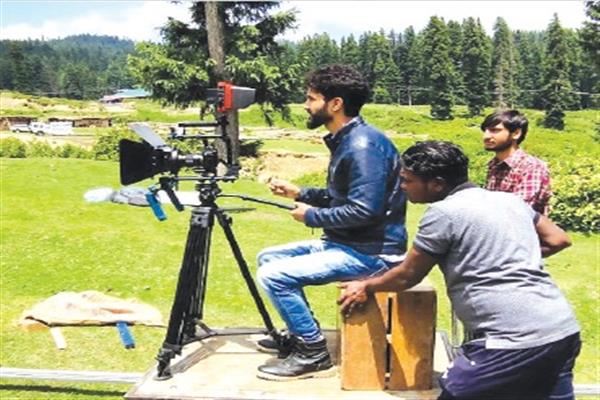 When Ehsaan Khan started fiddling with his dad’s old camera, he was expected to pursue his dad’s lost passion. His father, despite being enthusiastic for photography couldn’t fulfil his dream of becoming a photographer but he wanted his son to go far away in the film industry of Kashmir.

Hailing from Alamgiri Bazar area of Srinagar, Ehsaan has been keen towards filmmaking since childhood. He always enjoyed filming little things. From school days, he started his journey and worked with the film director, Hussain Khan to learn the basics. “I started making short videos when I was a kid and that time there was no such concept here,” he said.

Starting his work as spot boy and today he has done projects featuring Bollywood personalities Hina Khan, Fareeda Jalal, Sara Khan and others. Recently he has cinematographed a movie, Kashmir Se.

He owns a production house and has choreographed a number of films like Kashmir Se, Country of Blind, Bed No. 17 etc. and has filmed a number of music videos of renowned local artists of Kashmir.

His years in Kashmir film industry has been a rollercoaster ride, he believes that one has to take small steps to reach higher goals.

“It’s about a lot of learning and being humble. Mir Sarwar and Hussain Khan have supported me a lot. They exposed me to many things,” he added.

As such Kashmir has been a perfect destination for shooting, he believes that there has been a changing scenario with regard to the filmmaking from some years in Kashmir where people are appreciating the content made by local artists.

“People are liking the films and music videos. The videos go viral in a day. Our cinema should reach the global platforms because Kashmiris have a huge potential,” he added.