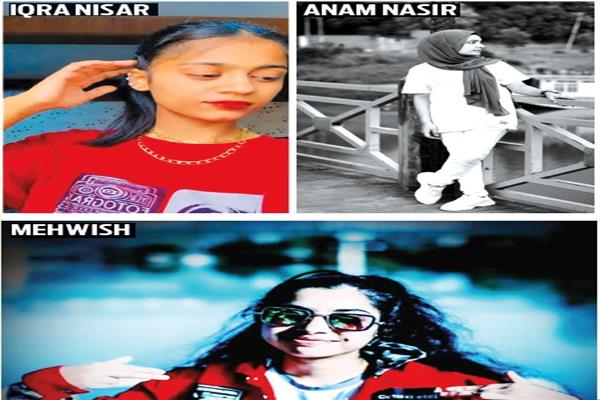 Carrying confidence and a fiery attitude, the female rappers of Kashmir are making noise by spitting bars. These female MCs are slowly and steadily claiming their place in the male dominated hip hop scene of Kashmir. For some time, an emergence of females in Kashmiri hip-hop culture is being witnessed.

Like every other girl, Anam Nasir aka Rapper Annie wanted to be a doctor or a teacher in her childhood. Little did she know that one day she will be performing among people swaying to her dauntless lyrics.

In 7th standard, she was fascinated with a track of Indian rapper, Raftaar. “The first impression made on my mind was rapping is saying a rhyme quickly and making sense out of that. That’s all I knew,” she said.

She started writing lyrics and with no one to learn from, she watched various YouTube video tutorials to make bars and rhymes.

“I told my dad that I want to be a rapper. He said girls don’t do this. I wanted my thoughts to reach out to people but I wasn’t ready to face them. A friend suggested me to make a lyrical video of a track that I had written in memory of my friend who died in the bike accident,” she said.

Some appreciated her for the track while some demotivated her with their harsh comments. Leaving aside all the negativity, she finally came up with a track, Let It Be where she was confident enough to revealed her face.

Her track was noticed by Cyphernama, a platform provided by a group of hip hop enthusiasts in Kashmir. “Cyphernama called me to perform and that boosted up my confidence. I performed among lot of unknown faces there and I got lot of appreciations from everyone,” she said.

Anam composes her rap tracks in Kashmiri, Urdu and English and tries to be better lyrically and rhythmically.

She sings one of her songs,

(You talk about the heights, I live on mountains. I am enough for myself and don’t need supporters.)

She said that society shuns the rapper as some artists presents an evil image and promotes obscenity in the name of rap. She said, “One has to be real and not fake it to get fame. Your lyrics should have some meaning so that it inspires the people. With my work, I changed with dad’s perspective who once opposed me.”

Today she finds her greatest support in her father who is one among the crowd cheering and shouting for her.

Seeing herself as a rap artist, she believes that the art doesn’t see the gender of an artist. “I appreciate other artists. You don’t belong to anyone in this game. You make your music and be on your own. I want girls who come after me should learn step by step. Social media is a thing where you can be perfect and still get judged by people. One has to get on social media once they are strong enough,” she said.

Currently, in 9th standard, Iqra Nisar appeared before people as Yung Illa in 2021. When its cyphers, Iqra is always ready with her hardcore rhymes and bars representing the status of women and society.

“I never miss the opportunity to be in cypher. It’s the place I come to know where I stand and how much I need to learn,” she said.

She started her journey with a collaboration song and soon went on solo as she received an overwhelming response from her audience. “Some hate while some praise. I don’t care about hate and only focus on the positive comments. That’s what keep me going,” she said.

She doesn’t want to end up keeping it as a hobby but wants to pursue her career in it.

“Hip hop is an expression to your laughter, anger and sadness. This culture has no rules. You make your own rules and break them. People misunderstand this genre of music but in reality, its like any other art and we are like any other artists who have talent and work hard on the skills,” she said.

(My skill is my grandeur. My name is rising. Your peace will be disturbed. Make efforts to destroy me!)

Iqra wants to cultivate the female hip hop scene with healthy battles to hone each other skills. “This is what I like to do most and I am sure other female rappers are also serious with it. I want more females to come so that we can do battles and make our community stronger. Like boys do battles, I want to create same culture among girls,” she said.

Hailing from Srinagar, Mehwish goes with the stage name Mc Hella who sees rap as a strongest weapon to spread awareness about social evils.

Getting inspired by watching female rappers across the globe, she came up with the song that highlights the value of life and rising suicide cases among the youth.

“Our society is plagued with many evils. With rap, you can say a subtle thing in a strongest way. Problems like suicides, acid attacks, harassments and rapes should be talked about in rap,” she said.

The lyrics of her song goes:

(Problems come and go in life. Learn to fight back. Everyone has to see the challenges in life. No one is living in peace).

“I wanted to give a message to people that suicides are no options to deal with the problems. It ruins the whole family. Your life is beautiful and you should value every bit of it” she said.

She further said that the women are breaking stereotypes in every field and giving a tough competition to their male counterparts. “Rap among girls in Kashmir is gaining momentum and we are also voicing our words just to be heard. Our voices will be echoed and will draw others too,” she said.