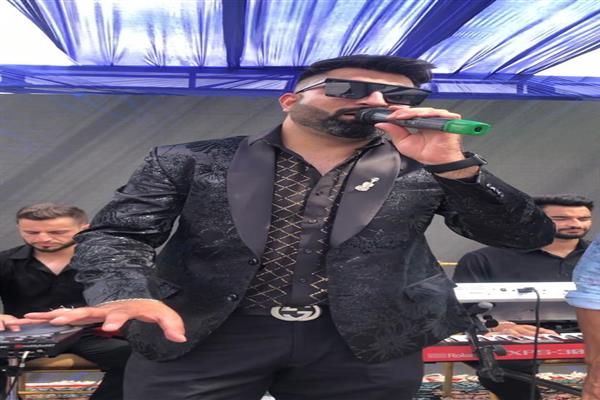 Coming from a family with music background, young singer and musician,Owais Pandith says books never attracted him, and was more inclined towards music as it was in his genes.

Hailing from Tulsi Bagh area of Srinagar, Owais told Rising Kashmir that from his childhood, he was aiming to become a singer.
“Most people these days aim to become doctors or engineers but in my case, it was music and singing. Music was in my genes and opted it for my career,” he said.
Presently, Owais is leading his ‘Chinar Band’ that he started in 2012 and 8-10 young artists are performing in his band.
Recalling his school days, Owais said, he would take leading role in cultural programs but was never inclined towards his books.
After completing 12th standard, Owais went to New Delhi to pursue his dream and joined International Musical Institute Delhi for a two-year course in Music.
“My father Mushtaq Ahmad and brother Mansoor Pandith are also musicians.  I mostly learned music from my father and was inspired by his Piano.  He was playing that exceptionally,” Owais said.
Owais says his family always supported his ideas including opening of a musical band which was not popular those days. There was no government support at all and I managed everything on my own,” he said.
“After returning from New Delhi, I started participating in cultural programs on Doordarshan and other platforms but I had a desire to start my own music band in Valley,” he said.
Owais says following a dearth of finance, he took a loan of 3.5 lakh rupees from a local, and his mother also sold her jewelry to support his dream.
“With the help of my friends, I got all members of the musical band. We started performing and got a good response and appreciation,” he said.
In 2017 he organized a four-day public event Jashn-e-Eid with the help of his friends in Srinagar. It was a mega event and got good support from the people.
Owais also performed in Mumbai in 2018 for a musical concert at Children Welfare Centre.
In 2021, he opened his own studio ‘Chinar Studio 9’  in Natipora and most prominent singers in Kashmir visit this studio to record their songs.  It has state of art facilities, he said.
“My studio is acting as a platform for the budding singers in Kashmir,” he said.