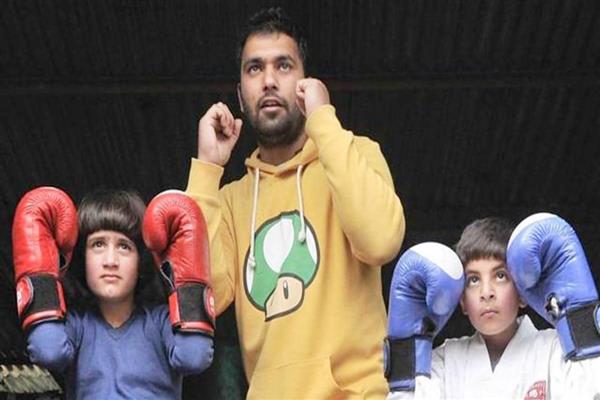 Inspired by superstar martial artist Bruce Lee, Faisal Ali Dar was passionate about learning martial arts at the age of 15. He would watch videos of Bruce Lee in his childhood.

While he was criticized for choosing martial arts as sports in his village Bagh Bandipora, this didn't deter Faisal from following his dream. He took the task of creating awareness about these sports in his district.

Dar has zealously followed his passion and recently was awarded the Padma Shri by the Ministry of Home Affairs, Government of India.

“We must similarly respect sports as we respect academia. It is a sport which can channel the energy of youngsters in a positive direction and keeps them away from bad company and bad deeds,” he says.

Dar said that sports not only plays an important part in the overall development of an individual but can help them excel in their studies and affairs of life.

“I would request parents to allow their children to take part in sports as it makes them disciplined, determined, and self-confident for the challenges of life ahead,” he said.

Dar told Rising Kashmir that he started his martial art journey at the age of 15 in 2003 after being inspired by watching movies of Hollywood star Bruce Lee.

Soon after receiving coaching from coach Kuldeep Handoo, Dronacharya Awardee in 2006, Dar brought laurels to the valley and bagged a silver medal in 2010 in Kickboxing Asian championship held in Pune Maharashtra.

Dar has also played four nationals where he won two gold, and one silver medal at various places across India.

His 11-year long career as a martial artist ended in 2013 after which he devoted himself to coaching youngsters in various sports.

Dar has brought out a new concept about different kinds of sports and has become successful in involving the young generation to opt for sports as a career.

“There are 2687 players registered in my 17 clubs all of which work under Ali Sports Academy in which 16 players have participated in international championships. Four players have bagged gold, five bagged silver while three have won bronze medals in different events,” Dar said.

“So far under my coaching, 370 players participated in national championships of which 24 have won gold, 33 players bagged silver whereas 56 players won bronze medals in different martial arts events, whereas 16 of his trainees have participated in rugby nationals,” he says, and claims, “All are products of Ali Sports Academy.”

According to Dar, out of his 17 sports clubs, 15 clubs are in eight districts in Kashmir province while two are in Jammu province.

“To create sports culture in general and motivate youth to channelize energy in a positive direction, in particular, is my motive behind opening these clubs or units across the valley,” he says.

Dar also provides regular training to the players in many sports disciplines, including disabled children.

“In my 15 years of work, 5642 male and female school students and young in Martial arts, Rugby, Badminton, volleyball, Kabaddi, Water sports Table Tennis and Snooker disciplines are registered with my sports academy,” he says.

He believes that it is the first kind of sports intervention by him as he has worked hard to energize the youth to channel their talent and to build up sportsperson spirit among them.

“I have wholeheartedly involved my club members and players for their active participation in national functions like Independence Day and republic day,” he says.

Dar is unparalleled in all respects for the promotion and creation of a sports environment in the entire valley. He can motivate the young youth and general public for their active participation in many socio-economic activities.

He says he has struggled to implement the new idea of many different sports activities in the area.

“The prevailing situation of the valley has become the main hurdle for motivating the players for their participation in sports activities,” he says.

He says when he started his academy no space was provided for trainees for establishing a permanent club.

“We practiced right under the open sky and I continued my mission which ultimately yielded a success for the nation,” he says.

A day ahead of Republic Day, Dar was awarded Padma Shri for his distinguished service in the field of Sports and Art as an international martial artist.

Among 128 recipients of the Padma awards, J&K has bagged two Padma Shri awards and one Padma Bhushan award.

“Without striving hard, determination and dedication these prestigious achievements are not achieved,” he said.

He added that he feels honoured for getting the Padma Shri award from the Government of India on the occasion of Republic Day 2022.

Faisal has also received Dr B.R. Ambedkar National Award in the “Sport and Peace” category for his contribution in “Peace-Building Activities” through sports in Kashmir while his academy's students have so far won awards in many international events.

He has also received the “Savior of Kashmir” award for his active contribution in the 2014 deluge by Divisional Commissioner Kashmir. He is also named in Forbes Asia magazine in the 2017 edition under the “Sports and Entertainment” category. He was also conferred with an award for his role in “Nasha Mukth Bharat Abiyaan” by the Ministry of Social Justice and Empowerment Government of India in 2021.

While taking to micro-blogging site Twitter, the Lieutenant Governor of Jammu and Kashmir, Manoj Sinha also congratulated the awardees.