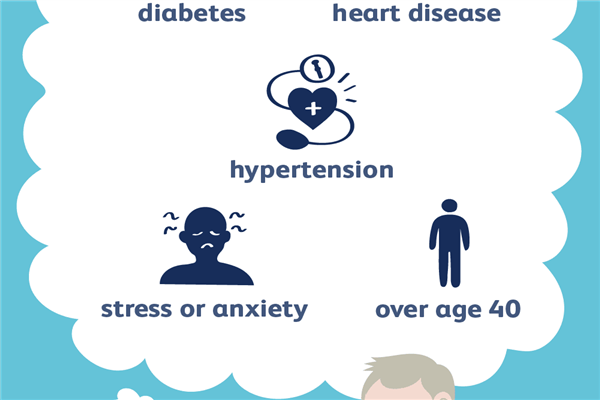 Erectile dysfunction (ED) is the most common sexual health problem in men that causes a substantial negative impact on intimate relationships, quality of life, emotional and psychological well-being and self-esteem.

The incidence increases with age and affects up to one-third of men throughout their lives. Male sexuality, a complex physiological process, is an important part of the quality of life. The maintenance of normal sexual function depends on the coordination of the human multi-system, involving the coordination of the nervous system, the cardiovascular system, the endocrine system and the reproductive system. When these systems or psychosocial aspects are changed, it will affect the quality of normal sexual life for any individual.

In men, sexual function declines over time, beginning during the fifth decade and affecting all domains of sexual health including desire, arousal, erectile function, and ejaculation/orgasm. Here I try to highlight the risk factors, types and major treatment protocols for ED that can be useful for patients.

Erectile dysfunction is the persistent inability to achieve or maintain a penile erection satisfactorily for sexual performance and is the most common male sexual disorder. 44% of men in the age group 60-69 years and up to 70% of men above 69 years endorse erectile difficulties; in men below 40 years of age 5 % endorse ED.

The are two major subtypes of ED which includes Lifelong ED and Acquired ED.

·        Lifelong ED: in which erection cannot be achieved from the outset of sexual desire.

·        Acquired ED: in which ED begins after a period of normal erectile and sexual activity.

Each of these subtypes can have either psychogenic or organic contributors.

Psychotherapy: Psychotherapy is considered as a first-line ED therapy. It is both noninvasive and effective, and can be combined with other therapies.

Lifestyle modification in men with ED: It is believed that lifestyle adjustments in men with ED not only reduce cardiovascular risk but also improve ED symptoms. Lifestyle alterations such as smoking cessation reduce cardiovascular mortality by 36%, physical activity results in 30-50% reductions in diabetes mellitus and coronary artery disease incidence, and diet reduces death from CAD by up to 36%.

Based on these findings, recommended lifestyle alterations include regular exercise, smoking cessation, dietary intervention with emphasis on the Mediterranean like diet, as well as moderate alcohol consumption.

Hypogonadism and ED: Testosterone supplementation is often recommended in hypogonadal men with ED, which may ameliorate both ED symptoms as well as cardiovascular risk. Studies have shown a 57% overall response rate to testosterone monotherapy in men with ED, with an improvement in erectile function in 39% of men, as well as improvements in sexual performance, desire, and motivation. Testosterone supplementation should begin prior to treatment with ED-specific medications.

Sildenafil, tadalafil, and vardenafil are the most popular ED drugs in current use. Sildenafil was the first PDE5i approved for ED treatment, has a time of onset of 30 minutes and an 8-hour duration of clinical efficacy. Both sildenafil and vardenafil have a delayed onset of action after fatty food ingestion. In contrast, tadalafil has a longer time of onset of 2 hours, with a 36-hour duration of efficacy and with no interaction with food.

Transurethral therapies: While limited in its utility, transurethral alprostadil (prostaglandin E1(PGE1) is a reasonable first-line or combination ED therapy. First brought to market in 1994 and marketed as Medicated Urethral System for Erection (MUSE®), transurethral alprostadil has shown limited efficacy, with response rates of 27% to 53%."However, combination therapy with sildenafil has been shown to salvage the effects of MUSE®. The system is also beneficial in men whose penile nerves have been compromised as it bypasses the need for intact neurological pathways for erection".

When used alone, PGE1 results in high rates of erections usable for sexual intercourse. A combination of papaverine and phentolamine, marketed as Androskat® but commonly referred to as Bimix, is also available. Bimix has an efficacy rate of 94% with a side effect incidence of 0.9% to 2.6% for prolonged erection, pain, or hematoma.

Surgical therapy in men with ED

The spectrum of ED treatment is incomplete without mention of some invasive therapies such as penile prosthesis and penile revascularization procedures.

The semirigid prosthesis is easier to implant and maybe a better option for men with poor manual dexterity and difficulty using the pump of the inflatable prosthesis. Penile prosthesis requires replacement every 8 to 15 years, and the most common complication after implantation is infection.

"The principles guiding penile revascularization include anastomosis of the inferior epigastric artery to the dorsal penile arteries and/or the deep dorsal vein".

Erectile dysfunction significantly limits the quality of life of a growing number of men. Given the rise in the number of predisposing factors due to sedentary lifestyle and dietary choices, ED has been affecting a larger population in every upcoming year. The spectrum of treatment ranges from minor lifestyle changes to major surgical interventions.

Continued research into the molecular mechanisms of ED and the development of improved medications will further expand the significant armamentarium of treatments currently available, improving not only the quality of life of affected men but also their life span.

Unusual sexual disorders everyone should know about

According to limited research, this condition preferentially affects men (67%-81% male predominance) and begins between 26 and 33 years on average. Unsurprisingly, this condition may lead to interpersonal, clinical, and criminal repercussions. Sexsomnia likely exists on a continuum starting with sleepwalking. Interestingly, obstructive sleep apnoea is a recognized precipitant of sex-arousal disorders. In a handful of those treated for sleep apnoea, these disorders abated. Other possible treatments include maintaining sleep hygiene, antidepressants, and refraining from drugs and alcohol.

The aetiology of POIS remains unknown, but some experts think that in men it could be an autoimmune or allergic reaction to semen. Other experts hypothesize that it could be due to a chemical imbalance in the brain.

Although no definitive treatment for this condition exists, some men have tried SSRI antidepressants, benzodiazepines, or antihistamines. When all else fails, abstinence is an option. Alternatively, sex can be scheduled for when a person has enough time to cope and recover.

Persistent genital arousal disorder: Persistent genital arousal disorder (PGAD), a syndrome marked by spontaneous sexual arousal or orgasm primarily affects women. These orgasms are unpleasant, and some women found relief via masturbation. Most of these patients are sent for psychiatric treatment, although there appears to be a neurological underpinning. “We hypothesize that many cases of PGAD are caused by unprovoked firing of C-fibers in the regional special sensory neurons that subserve sexual arousal,” the authors wrote. “Some PGAD symptoms may share pathophysiologic mechanisms with neuropathic pain and itch.” Bolstering the position that PGAD is more neurological in nature. Neurological treatment following neurological evaluation has helped some. Interventions that have shown efficacy in individual patients include surgery to remove sacral nerve cysts and administration of IV immune globulin, as well as tapering doses of antidepressants.

Retrograde ejaculation: When a man has an orgasm,a sphincter muscle shuts off access to the bladder so that semen can propel through the urethra. With retrograde ejaculation, a disorder of this muscle causes semen to divert into the bladder. Common causes include complications from prostate surgery, adverse effects of drugs such as SSRIs or medications used to treat enlarged prostate, and nerve damage caused by multiple sclerosis or uncontrolled diabetes.

For most men, the symptoms of retrograde ejaculation are benign. Treatment can consist of medication discontinuance if drugs are the cause. If due to nerve or muscle damage of the bladder, pseudoephedrine or imipramine could ameliorate muscle tone at the bladder entrance. Finally, in vitro fertilization may be an option for those interested in having children.

Sexual drive results from psycho neuroendocrine mechanisms. Hypoactive sexual desire disorder (HSDD) and sexual aversion disorder (SAD) are two types of sexual desire disorders. These conditions likely exist on a spectrum, with SAD being more severe. HSDD is defined as a persistent deficiency or lack of sexual fantasy or desire for sex. SAD involves aversion and avoidance of sexual contact with a partner. Subtypes include generalized, acquired, lifelong, situational, secondary to psychological factors, and secondary to combined factors.

Treatment for sexual desire disorders includes analytically-oriented sex therapy and psychotherapy, such as cognitive-behavioral therapy. Of note, SAD is often progressive and refractory to treatment. Additionally, various hormone replacement treatments, as well as bupropion, herbal remedies, and even amphetamine and methylphenidate have been tried, with mixed success. Addressing patients’ sexual problems “Sexual desire disorders are underrecognized, under-treated disorders leading to a great deal of morbidity in relationships.”

By becoming more familiar with prevalence, etiology, and treatment of sexual desire disorders, people hopefully will become more aware and comfortable with this topic so that they can consult doctor at right time to get appropriate diagnosis and treatment.”