She is 15th President of India and she expressed her words: “President is a constitutional position, and I will uphold its dignity and will stay away completely from politics and work for the people of the country” 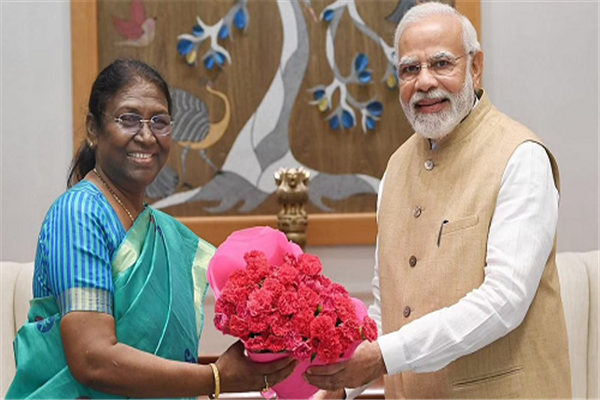 Some people spend their whole lives struggling. Some times for their own interests and some time for the cause of others. Such people perform the responsibilities of the family and society with such devotion and honesty even while struggling they create examples. One such personality is Droupadi Murmu. Born in 1958 in Baidaposi village of Mayurbhanj District of Odisha, Ms Murmu belongs to the Santhal community, one of India's largest tribal groups. Daughter of a village council chief, she studied at the Ramadevi Women's College in the state capital, Bhubaneswar. From her childhood, she was excellent in her studies and also a great devotee of Lord Shiva. From an ST family, she faced many hardships & completed higher studies. Despite being born in a backward area & in a tribal family, her family members were educated & hold a good position in the village. Her father & grandfather were village heads. She was married to Shyam Charan Murmu having 2 sons & 1 daughter. But her both sons died later in life. Draupadi Murmu married Shyam Charan Murmu, a banker, who died in 2014. The couple had two sons, both of whom are dead, and a daughter. She lost her husband and two sons in a span of 4 years but she didn't loose her courage. Currently, she lives with her only daughter Itishree Murmu. She accepted the pains of others to forget her own.

When she was a child, her father took her to the nearby town of Rairangpur when a Minister in the Odisha government, Kartik Majhi, was visiting. Suddenly, she ran up onto the stage, waving her school certificate, and told the minister that she wanted to study in Bhubaneswar. The minister was so impressed by the little girl's enthusiasm that he ordered his staff to help her get a place in a government school in the state capital.

Beginning her career as a clerk for the Odisha government, Ms Murmu served as a junior assistant in the irrigation and energy department from 1979-1983. After she quit her job in Bhubaneswar and returned to Rairangpur to take care of her family at the insistence of her mother-in-law, she took up a job as a teacher at the Sri Aurobindo Integral School. But she refused to accept a salary. The school only paid her rickshaw fare. She said this was not a job, but public service. She said the salary of her husband, a bank officer, was enough to take care of the family needs. She donated four acres of land of in-laws for the construction of a school in the name of her deceased husband and children.

Her political career began in 1997 when she was elected as a councilor in the local polls in Rairangpur. She was often seen personally supervising sanitation work in the town, standing in the sun as drains were cleaned and garbage cleared. From 2006 to 2009, Ms Murmu was the president of the BJP's state wing for "scheduled tribes" - tribal communities recognised by India's constitution as socially and economically disadvantaged.  As a member of the BJP, she was elected to the state assembly twice - in 2000 and in 2009 - from the Rairangpur seat. Draupadi Murmu was also awarded by the Legislative Assembly of Orissa the Nilkantha Award for being the best MLA From 2000 to 2004, she was a minister in the state's coalition government, led by Naveen Patnaik of the Biju Janata Dal party. Initially in-charge of commerce and transport, she later handled the fisheries and animal resources portfolios. In 2015, Murmu was appointed as the first female governor of the eastern state of Jharkhand, holding the position until July 2021.

On several occasions, she also made news for breaking protocol - like when she visited Odisha Chief Minister Naveen Patnaik at his home or went with a delegation to meet the railway minister to press for expansion of rail services in Mayurbhanj, her home district. "Both incidents were considered violation of protocol. But she couldn't care less," says Rajkishore Das, her political mentor. Mr Das adds that the most remarkable part of Ms Murmu's personality "is her equanimity in both happy and sad times and her stoicism in the face of tragedy". "The way she gathered herself and continued working for the people even after multiple tragedies in her family speaks volumes about her remarkable strength of character."

Prime Minister of Indi Mr. Modi said “Droupadi Murmu Ji has devoted her life to serving society and empowering the poor, downtrodden as well as the marginalised. She has rich administrative experience and had an outstanding gubernatorial tenure. I am confident she will be a great President of our nation. Millions of people, especially those who have experienced poverty and faced hardships, derive great strength from the life of Smt. Droupadi Murmu Ji. Her understanding of policy matters and compassionate nature will greatly benefit our country”. Union Tribal Affairs Minister Bisheeswar Tudu said: "I am especially happy as Murmu belongs to my Lok Sabha constituency and is also of my tribal community."

Not just her life, but the Santhal tribal community, residing in the Mayurbhanj district of Odisha (where she is from) and Jharkhand are overwhelmed as well. Tribal families are aware that it is a symbolic gesture for their community. In Odisha’s Uperbeda, some 280 kilometres from the capital Bhubaneswar, people were in celebration mode even before the counting of votes began. Murmu was born and grew up in this remote tribal village, now its people are proud and overjoyed for “Odisha’s daughter”. Bhavika Maheshvari, a 13-year-old girl from Surat, a Class 8 student, is a motivational speaker and has written a book on life lessons to be learned from Draupadi Murmu.

Now she is the second woman president (first was Ms Pratibha Patil) but the first woman tribal president of India. She is 15th President of India and she expressed her words: “President is a constitutional position, and I will uphold its dignity and will stay away completely from politics and work for the people of the country.”