Being a tribal woman, she has always worked keenly for her tribal community and this has earned a name and fame for her 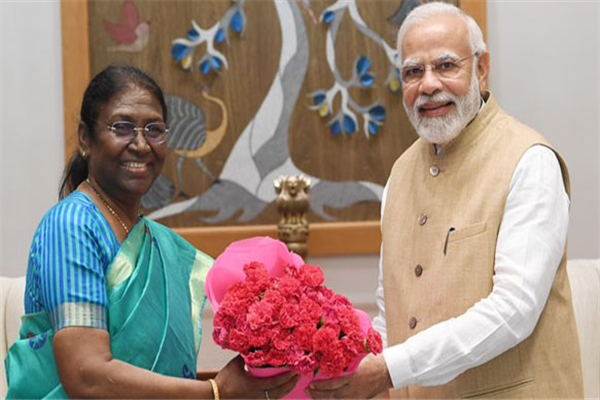 The presidential elections due on July 18, 2022 will be held primarily between the NDA candidate, Draupadi Murmu and the UPA nominee, Yashwant Sinha. We have seen a number of candidates running for the Presidential post with different social and political backgrounds in the past. Right from the independence till date, SC candidates got chance to become the President of India twice, i e. K. R. Narayanan and Ramnath Kovind. Likewise, Muslims also got elected to the top post thrice, i e. Zakir Hussain, Faqruuddin Ali Ahmed and Abdul Kalam. But it will be for the first time that a Scheduled Tribe candidate would be getting a chance to occupy the post of the President this time. The credit for this invariably goes to the vision of the Prime Minister, Narendra Modi.

Keeping the social equation in the country, political permutations & combinations and the electoral arithmetic regarding the elections of the top post in view, the result, that will be declared on 21 July 2022, is a foregone conclusion. The UPA and the opposition groups combined together and presented some faces as their nominees for the election. However, all their three candidates, i.e. Sharad Pawar, Farooq Abdullah and Gopal Krishen Gandhi flatly refused to fight the elections due to their own reasons. Ultimately their choice fell on a rebel of BJP, the disgruntled Yashwant Sinha who is lately now a member of the TMC as well. Unfortunately, Sinha used unpalatable remarks against his opponent Draupadi Murmu consequent upon her nomination as the candidate and it hasn't made a good impact in his favour as well.

The non-NDA and non-UPA political parties have reacted very positively to the candidature of Draupadi Murmu. BJD in Orrisa, BSP and JMM have given clear hints to support Murmu. There are more regional groups who aspire to support an ST candidate, especially the North-East political parties. Yashwant Sinha may not be able to attract any sort of attention from any political combination in the given circumstances beyond the UPA led by Congress de jure and TMC de facto.

Draupadi Murmu belongs to Santhal tribe in Orrisa and essentially belongs to a backward social caste. The Santhalis, the third-largest scheduled tribe community in the country, are mostly populated in Orrisa, Jharkhand and West Bengal. Moreover, her economic background has also been very challenging. It goes to her credit definitely that she rose to such a level and has now caught the imagination of the Electoral College for the post. She has very humble but a successful past. Being a tribal woman, she has always worked keenly for her tribal community and this has earned a name and fame for her.

Murmu was born on 20 June 1958. She was born in a family of village Mukhia who worked under the Panchayati Raj system. Draupadi has been a part of the Bharatiya Janta Party (BJP) and now she is the official nominee of the National Democratic Alliance for the forthcoming 2022 presidential elections. Her father Biranchi Narayan Tudu was a resident of the Baidaposi Village of the Mayurbhanj district in Orrisa. Being a tribal woman, her life was always difficult and filled with hardships. She faced oppression at social level and also was struck with a series of misfortune and personal losses. She started working as a teacher before she entered into state politics. She earned her Bachelor's degree in Arts from Ramadevi Women's College in Bhubaneswar and also served as a junior assistant in the irrigation and power department in the Orrisa government.

In 1997, Draupadi Murmu joined the BJP. She began her political career as the vice-chairman of the Rairangpur NAC. A two-term former MLA from Rairangpur, Murmu held on to her assembly seat in 2009 when the BJD had snapped ties with the BJP weeks ahead of the state elections, which were swept by the Chief Minister Naveen Patnaik. The Orrisa Legislative Assembly honoured her with its 'Best MLA of the Year Award' for the year 2007. She has also diverse administrative experience having handled ministries such as transport, commerce, fisheries and animal husbandry in the Orrisa government as a Minister. She became the first woman Governor of Jharkhand state for the term 2015-21. Additionally, she was the first female tribal leader in such a prestigious position in India.

NDA, it seems, has put forward a very promising candidature by nominating her. Selecting a tribal woman for the post of the President of India was not only a calculated decision by the party, but it is also a very convincing one. The BJP national President, JP Nadda made the announcement at a press conference and linked the decision with the slogan "sab ka saath, sab ka vikas". Nomination suits the narrative of the NDA which previously selected Ram Nath Kovind in 2017 for their nomination. He too belonged to a very small community and was a farmer’s son.

Murmu definitely has a higher chance of winning the presidential elections in 2022. Her case stands very strong against the former bureaucrat and Union Minister Yashwant Sinha whom the opposition selected as their candidate. The tribal background adds to the preference that she will receive during the elections. The BJP expects that Murmu will continue the trend that the NDA alliance is trying to create. She might win the elections head-on and become the second woman president in India and also the very first tribal president.

Santhalis are a fighting tribe and have a high literacy rate compared to other tribes in Orrisa. Draupadi Murmu isn’t the only Santhali that has brought honour to the tribe. Hemant Soren, the current chief minister of Jharkhand, also belongs to the Santhal tribe. Girish Chandra Murmu, the first Lieutenant Governor of the Union Territory of Jammu and Kashmir, is now the Comptroller and Auditor General of India. Mayurbhanj Member of Parliament, Biseswar Tudu, a Santhal, is the Union Minister for Tribal Affairs and Jal Shakti. On the nomination of Draupadi Murmu, he said, “At a personal level, I got emotional, especially since Draupadi jee is from my community and my district. Prime Minister Narendra Modi-led government’s commitment towards upliftment of tribals is immeasurable.”

The election of Draupadi Murmu as the next resident of Rashtrapati Bhawan in New Delhi will create a history. It will establish besides inspiring many people the fact that 'Antoudya' is a practical philosophy of the Indian nation-state even in its statecraft, where all sections of the society have ample chance to rise to the highest position. It will also strengthen the resolve of the nation to evolve an egalitarian society. The results of the presidential elections on 21st of July this year will also establish the notion that half of the population in India in the form of famale gender has equal opportunities, rights and capabilities.