Dr Najmun Riyaz’s Zehen: A campaign for mental well being 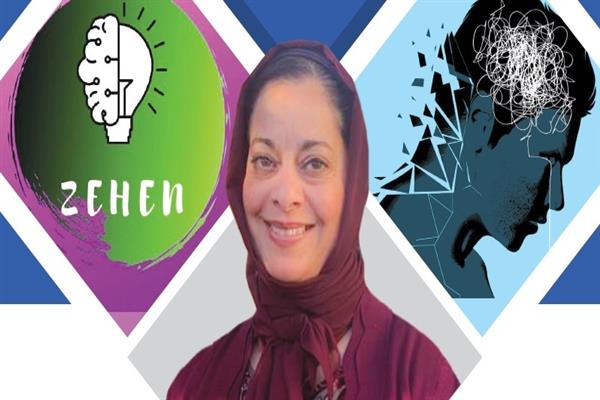 Dr. Najmun Riyaz, a psychiatrist, blogger and a YouTuber is imparting awareness about emotional and mental health to people of Kashmir. Though her profession took her to the United States, her roots remained deeply connected to Kashmir and through the internet she is reaching out to people with her videos and blogs.

Her initiative, Zehen (mind) as she explains, is an attempt to break age-old stigma, not just on mental illness, but to break the walls of shame which are so high and strong in society even in the 21st century. Her goal is to encourage dialogue about the identity of a person.

She said, “Who we are, where we came from and where we are headed as a society. It all begins from our mind, our Zehen.”

She said the commonly used phrase, “What will people say” is a voice that is reflective of Generational Trauma.

In conversation with Rising Kashmir, she said that being 50 years old makes her feel very free from the inside and especially from a society where the phrase “What will people say” has become the center point.

“We live and survive by these words Lukh Kya Wanan (what will people say) but I feel at the age of 50, this voice faints down a lot. With age and experience, we become more grounded, more fearless, and braver. So it's a great thing to grow old. But I didn't want people to have to wait until age 50, to have to overcome this voice. It means we have deep psychological wounds, hurts, abuses, war, conflict, bullying, criticizing and judging, name calling, teasing, catcalling etc.

In people’s eyes, if we are doctors, engineers, or in any authoritarian position, we are good. But we are forced to feel inferior if we are anything less than that. It's a shame that not just in Kashmir, but even in advanced societies like America, UK or other developed countries. People still attach their identities based on how others perceive them. So “Lukh kya wanan” happens everywhere. And that was one big reason I created Zehen,” she said.

Dr. Najumus wants to create a Zehen for every conflict-ridden area where resources are minimal and trauma is rampant.  As she says, people’s minds need help too, like their bodies.

What’s most intriguing in her videos is that she talks in Kashmiri language to connect to the people and soon after the uploading, her videos get a good response.

Another reason that triggered her for starting Zehen was after a Head of an IT firm in the US who has branches and employees in Kashmir, asked her to coach his employees as a volunteer during the Covid 19 pandemic. Since the company also had non-Kashmiris in it, she had to give them sessions in English. Building a connection which is important in her profession was something which she thought was missing while addressing the employees in English language and she felt an urge to talk in Kashmiri.

She said, “That felt very weird. There was a very strong desire to speak to them in Kashmiri. They are like my brothers and some even like my sons, so it felt very superficial to me when talking to them in English. After speaking to many of them, I felt this calling to do something not just about them, but about everyone else in Kashmir, and connect with all my brothers and sisters back home at an emotional level. What better way to do it than social media. Being someone who raises awareness of the bad effects of social media, I took a deep dive into it.”

Also she has launched another initiative, “Mauj” (Mother), a support group for single mothers in Kashmir via Zoom meetings. A space for inspiring single mothers from low socio economic who inspire and empower each other through these support groups where meetings are held once every two week. The initiative is under the leadership of a 17 year old Kashmiri girl, Fouzia.

She said, “Our goal is to convert ‘Mauj’ into a global organization, where we can have support groups for single mothers in every conflict ridden area. It’s a huge endeavor, but with help of our young and bright minds, and Allah’s grace, Inshallah hopes we can pull it through sooner than later.”

Hailing from Saida Kadal, Srinagar and born in a middle class family, her choice initially was not to be a psychiatrist. Her uncle who was a professor, in his late twenties developed a mental disorder-schizophrenia and many people believe that she chooses to be psychiatrist because of her uncle but this is not the case.

She said psychiatry is one such medical profession in the United States of America where it is easy to maintain a work-family balance.  Due to her husband’s busy schedule as a cardiologist, she wanted to be there for the children. At first, she said that she had a very hard time liking it but eventually, as she got to learn the human aspect of it, slowly she started loving it.

Talking about the traumas, she said the undiscussed traumas worries her more. Traumas associated with bullying, name-calling, parental trauma, the trauma of discriminating those who are financially deprived, trauma of critiquing children for scoring fewer marks or not being able to qualify for professional exams, not becoming doctors and engineers, comparing them with other children and other traumas, trauma for not seeking help and pretending to be fine and then filling these wounds by unhealthy ways of excessive shopping, unhealthy relationships, need for money, big homes, expensive cars, financial status, etc.

“Traumas are breeding in many Kashmiri households and households across the globe. This trauma induces not just anxiety, but emotions like shame, guilt, embarrassment, which makes us disempowered, sad, empty, numb and affects our self-esteem, our ability to grow emotionally and intellectually,” she added.

Sharing a secret remedy for shame she said that people express sadness, happiness, excitement, and grief very loudly, but when it comes to the emotion of shame, people tend to stay quiet. “We all have dark secrets. We are humans. So no one is perfect. The best way to handle it is to talk about things that bring you shame. You will notice this feeling will melt down and slowly it will disappear and you will emerge as empowered, confident, and brave. You will reach a point, where Lukh Kya Wanan will cease to become your center point,” she said.

Growing up, having an uncle with mental illness was an area of shame for her family and later on she recognized the reason behind it. “Our mind too is an organ like any other organ in our body. It too can get sick. I am actually very thankful to my father for instilling in me the value of not feeling ashamed of my uncle who had a mental illness. He, with pride, sought help for him and got home a psychiatrist who would come every month to medicate him. I am so proud of him, for not disowning my uncle, when many relatives told him, “No one will marry your kids” and “Lukh Kya Wanan.”

She further said that Zehen is a tribute to thousands of those brave men and women, who either struggle with a mental illness, or have a loved one with a mental illness. “If they feel shame, I want to tell them it’s ok to feel it. I have been there, but guess what? Now you are not alone,” she added.

Soon, there will be a story section on Zehen where such young men and women would be given a space to share their struggles with either having a mental illness or dealing with a loved one with a mental illness.

She cleared that her campaign is not any organization and not to be replaced with a professional. “Zehen is just an educational, and awareness campaign meant to educate people about emotional wellbeing, remove the stigma on mental health and encourage people to seek help through local counselors and psychiatrists,” she said.

On her social media handles, she every now and then, uploads content with an aim to make mental health a discussable topic.  Smoking, drug abuse, suicide prevention are also some of the things that she can highlighted in her videos.

Her team is composed of some young folks who have helped her in making the things possible.

“I have never had a Facebook account, didn’t know a thing about Instagram, and YouTube. But now it has become my source to reach out to my people in Kashmir, and I could not have done it without the help of a bright young student from Kashmir, Effat. She is a gifted, 20 year old Kashmiri student who helped me to make an Instagram account, and taught me how to post etc. I call her my ‘social media coach’. That’s why I say, if my generation of middle class older professionals and young, bright minds team up together, we can make some positive impact on the world,” she said.