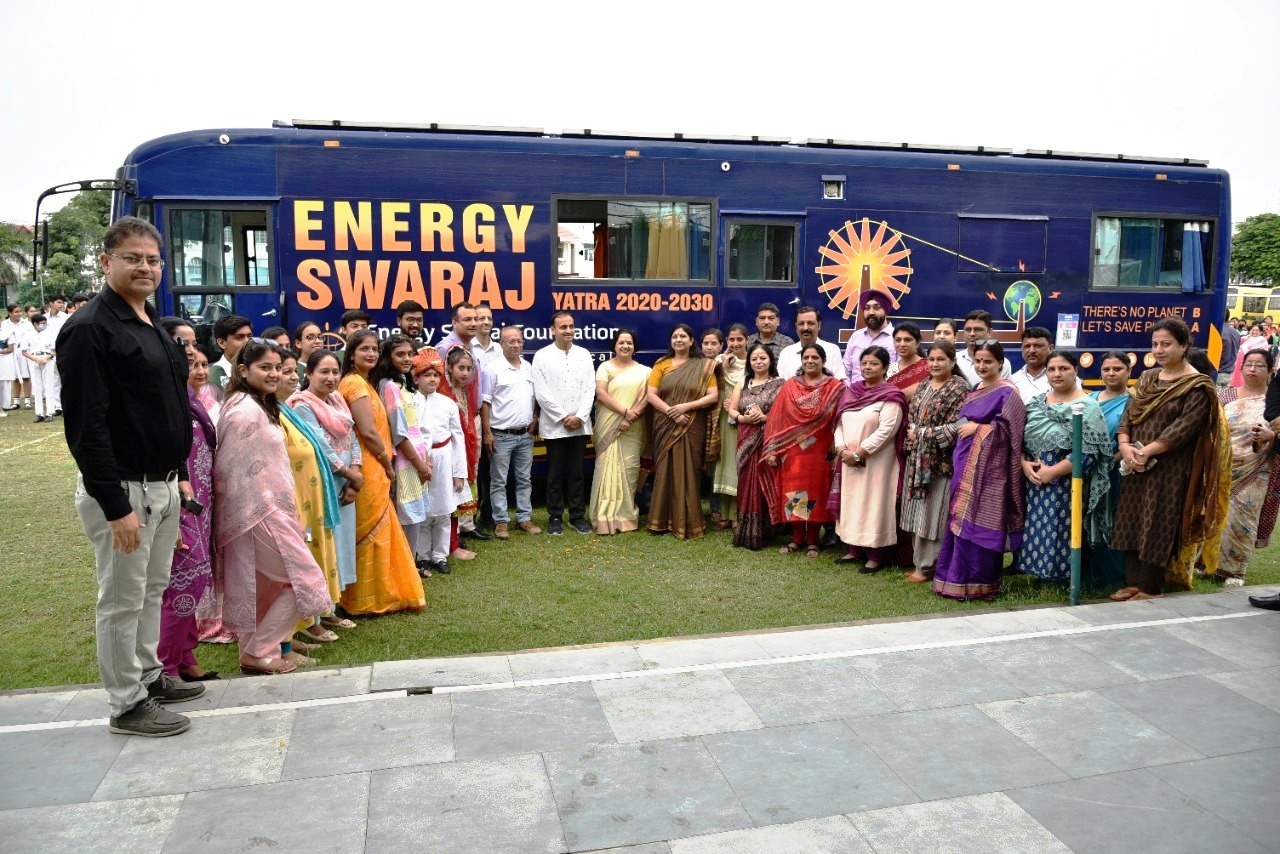 Jammu, Sep 16: Delhi Public School Jammu in collaboration with Vidhyarti Vigyan Manthan (VVM) hosted a Discussion cum Sensitization Session on Energy, Climate Change, with Prof Chetan Singh Solanki, popularly known as Solar Gandhi and the Solar Man of India, on Friday for the Senior Secondary Science stream students of the school.
The students and teachers of DPS Katra, Doon International School Jammu, and Police Public School Jammu also attended the program.
Prof. Solanki is a Scientist & Professor at IIIT Bombay and is also the Founder of the Energy Swaraj Foundation. He has reached 7.5 million families across India with clean light and has undertaken Energy Swaraj Yatra from Nov 2020 through a Solar Bus, where he has pledged to stay for 11 years in the wake of serious catastrophic climate change, until 2030.
Following Gandhian ideals, he coined the word ”Energy Swaraj”, and to establish Energy Swaraj globally, he founded the Energy Swaraj Foundation(ESF). He is also the Chairman of the committee of CBSE and AICTE for solar curriculum development and a member of the National focus group on Environmental Education.
As Prof. Solanki, arrived in his Solar Yatra Bus, he was accorded a warm welcome by the school Management, Principal, Staff and students with a ceremonial band, NCC clapping, and traditional tilak. Later, in his interaction with the students and teachers, Prof. Solanki discussed the problem and solution approach towards mitigating climate change, and adopting 100% solar energy, which in a few years will no more be an option but a compulsion, as we are running out of time to take corrective action.
The Prof. emphasized on AMG approach (Avoid, Minimize, Generate) for moving towards 100% solar-powered life. He also insisted on adopting drastic and immediate measures for avoiding and reducing the consumption patterns of three main fossil energies – coal, oil, and gas, which are being heavily used by people, institutions and industries to take positive actions for climate change.
The Students and Staff took a pledge to make Energy Swaraj a public movement, wherein everyone contributes to mitigating climate change and moving towards the adoption of solar energy.
Before Prof. Solanki’s session, Prof. Praveen Kumar Lehne, Vice President, Vigyan Parishad J&K and Prof &HoD of Electronics, University of Jammu set the tone of the whole event by briefing the audience about the program. He assured his support to all staff and students from his side for all Science related activities.
In another session, Dr Mayuri Dutt who is a National Coordinator of Vidhyarti Vigyan Manthan briefed them about the aim of VVM and its various activities. She explained that VVM is a national program for popularizing Science among school students and all schools and their students from grades VI to XI are welcome to join. She narrated her personal experiences to motivate the children to think out of the box, come out of their comfort zones and take India to the zenith of its progress. On behalf of the team VVM, she felicitated the school Principal, Ms Ruchi Chabra, and also released the VVM Brochure along with the other dignitaries.