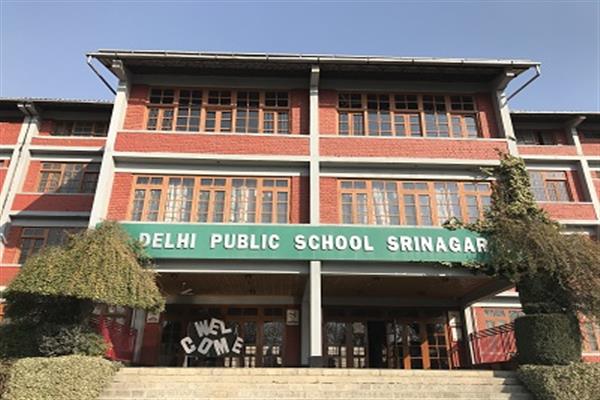 When a lady told Vijay Dhar, Vice-chairman of DPS Srinagar school that she will eat half food but admit her child to his school only, he thought that he won’t be able to fulfill her and other parents’ expectations. Today, DPS Srinagar is one of the best schools not only in the state but in the whole country.

“At first, I told my wife that we should not pursue this because the expectations are too high but then we made the decision to give our best. Today when I look at the achievements of the school, I feel very proud,” Dhar said.

Now the institution is not just best in terms of providing education but it is one of the best in infrastructure and resources available.

Among all the facilities, the school provides foreign scholarships to meritorious students from 16 years and above for high school studies abroad, where they have to live with foreign families and explore their culture. Dhar claims that the school is the only institution in the region that has started this initiative for students to explore and earn about foreign places.

“Out of 30 students across India, 3 students are from DPS Srinagar who goes to Japan for further studies every year. The students are settled in various cities across the country where they attend high school and stay with Japanese people. For all this, parents don’t have to pay anything to the school,” he said.

“Students went to Assam just a few weeks before Covid-19 broke out. I want my students to explore India first,” he further added.

Trainers are invited from outside to train the teachers in school. In the past, teachers have been sent to countries like New Zealand, Australia, and Malaysia for getting a better perspective and new vision of education.

The school is the first one in the country which gets its electricity from solar energy. The school library houses 50,000 books on a diverse range of subjects. It also has a robotics lab that won a prize of 22 lakhs from NITI Aayog. The school has also introduced several new subjects like Journalism, Information Technology, and Agriculture. Keeping in view the environmental issues, it is also going to be the first school with its own waste management unit soon.

“We have started computers and robotics from Class 3 only. In Grade 3, we have even introduced research to give an early start to the students in the field of research,” he said.

The section, Learning Resource Center, has 155 students. Depending upon the needs of the students, customized programs are made for them. The teachers in this section get an in-house training program from special educators.

“We have to take care of all students irrespective of anything. We have to make these specially-abled students our priority,” he said.

Dhar believes that the teachers should be paid well which can happen only when proper fees are charged. In 2016, schools were given the liberty to increase the fee by 10% which was later on reduced to 6%.

He said, “The national average at that time was 14% but now it's 16%. The fee fixation committee should visit the schools and see the facilities we are providing and set the fees accordingly. If Government teachers are on 7th pay commission, why should my teachers get salaries as per the 5th commission?”

Dhar said the school has gone through various difficult times and has crossed all the hurdles. “We have performed well during Covid-19 and unrest. In 2014, we had drastic floods but just after one month, we were back in action. During the 2012 unrest, when other schools were closed for months, we took our students to Delhi to save their academic year. We even survived an armed attack on the school building in 2017,” he said.

As far as sports are concerned, the school has a cricket academy, basketball academy, football academy and is also encouraging football for girls.

“I tell parents to send their children to play after school. We will have a girl's football team soon. Why should a girl child be deprived of what others are getting? I will also build a multiplex in the school if the government allows it. We have to keep an entertainment option to our kids,” he further added.

The admission process is normally conducted by an admission committee that checks the interest of the parent. Dhar says the support of parents to the school has been tremendous till date.

“The parents often approach me with advice and that makes me very happy. Parents also need to give time to their wards,” he believes.

Dhar believes that apart from the routine subjects inducing of the new ones is the need of the hour and the school is no way lagging behind. “Times are changing for a better tomorrow, a student needs to know about cyber security, information technology, and robotics which are important for the future.”

Citing an example of a child, who wanted to study arts while his parents wanted him to go for medicine. I told the parent to let him go for the arts and he got admission in a university in New York.” Also later, New York Times published an article about his paintings.

Also, we encourage our students to go for entrepreneurship, and many are in fact opening restaurants and gyms.

The interesting thing about the Dhar is that he talks of inclusiveness where government schools and private schools should collaborate. To give this idea a practical shape, DPS has adopted schools in village Chandara, of Pampore town, and has reconstructed two schools there. Now the students from the schools often interact with the DPS students.

Dhar does not feel a strong positive vibe about the current status of the overall education scenario.

“Our state was the first state which declared education compulsory in 1951 but now down the 70 years of the time period, there is a very small percentage of boys and even a smaller percentage of girls who go to colleges. What happens to the rest of the children? Where do they go? What do they do? I don’t think we have any statistics on that.’’

Also, talking about medical education, Dhar said that it is shameful that our children go to other countries to study medicine and pay a hefty amount of fees. “We have to stop this and build medical colleges of our own.

Dhar did his own schooling from SafaKadal, and has pursued engineering in Chennai. The school in Safakadal did not teach English then.

The school apart from being an educational institution has been used as a shooting location for many Bollywood movies. Scenes of movies ‘Notebook’ and ‘Lal Singh Chaddha’ were shot among the magnificent and beautiful school structures. A number of celebrities and eminent personalities have also visited the school. Film director - Kiran Rao, film actor - Amir Khan, Ambassador of Brazil to India - Andre Arabha Correa do Lago among others have visited the school so far.

The love and passion Dhar is showering through his work is being reciprocated by the students. “I know most of my students now. One feels happy when a child comes and gives you respect. Education is beyond calculations and alphabets.”

In the future, Dhar has plans for the school to take it to new heights. He wants to take it to the college level. “Current policy is good but we have to plan the education of tomorrow. I want to build a system where a student after passing Class 12th can train in information technology and e-marketing like streams. My dream is a top-quality college and I will do my best to achieve it,” he concluded.